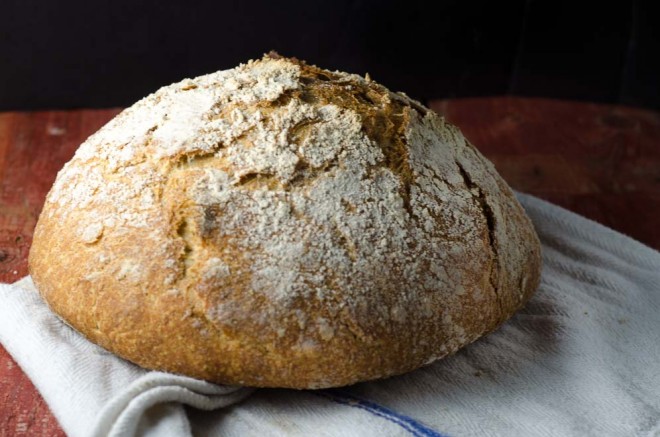 I bake bread just about everyday, an no-knead sourdough bread is doubtlessly our favorite. Not only for its simplicity, but also for its beautiful soft crumb and crispy, crackling crust.  Soups and stews are ever present in my home, and homemade bread served with plenty of butter, salt or olive oil typically accompanies those soups and stews.

So I’ve written about No-Knead Sourdough before, but a number of you long-time readers struggled with the recipe.  So I’ve made adjustments, tweaks and tested it every week (or a few times a week – it’s our favorite), and wanted to share it with you again in case you have a hankering for an easy artisan-style bread that’s flavorful, chewy, airy and with a crisp, thin crust.

I lean upon sourdough baking in my home, avoiding quick-rise breads any most breads raised by baker’s yeast in favor of sour leavening.  There’s a beautiful tradition to sourdough baking, which was the dominant form of raising breads until early in the 20th century when baker’s yeast began to replace sourdough starter as a leavening ingredient.

Sourdough Bread is Rich in B Vitamins, and Bioavailable Minerals

Sourdough offers a complex, pleasantly sour flour owing to the presence of lactobacillus bacteria that gobble up the flour’s carbohydrates and produce B vitamins, most notably folate, and lactic acid as a result.  Wild yeasts, captured in the bubbling starter culture which is nothing more than a slurry of water and flour (read more about sourdough starter here) give the bread its rise.

The process of sour leavening also activates food enzymes in the flour, and those food enzymes breakdown antinutrients like food phytate which can bind up trace minerals.  As a result, sourdough bread is richer in bioavailable minerals than quick-rise breads or those that are leavened through bakers yeast for a shorter period of time.

As a result of the work of wild bacteria and yeasts that give sourdough its characteristic flavor, sourdough breads are lower on the glycemic index, higher in bioavailable minerals, and higher in B vitamins than quick-rise breads.  And they taste better, too.

So there’s a few tricks to baking in sourdough, and I go into them extensively in my cookbook – The Nourished Kitchen – which includes some of my favorite sourdough recipes and techniques.  The real trick to making your sourdough turn out the way you like is to handle the dough lightly, and to keep your starter in the fridge unless you’re baking that day.

Keep Your Starter in the Fridge

I used to keep my sourdough starter on my countertop, as I baked almost daily.  Yet, after a while, I had trouble getting the rise I wanted from the bread, and missed the super airy soft crumb I love in artisan sourdoughs.  That was when a baker I know suggested leaving the sourdough in the fridge, unless I plan to bake within six hours.  And that simple act of storing it in the cold made for much better results.

Handle the Dough as Little as Possible

While I find that my no-knead sourdough bread benefits from a light working of the dough and forming of the boule, I take care not to overwork the dough which can make bread flat and gummy.  This video will give you a good idea on how to handle and shape your dough.

When baking no-knead sourdough breads, there’s a few tools that are very helpful to have on hand.  You’re likely to already have them, too.

A Stand Mixer Equipped with a Dough Hook

A 4-Quart Glass Mixing Bowl with an Airtight Lid

The dough for no-knead sourdough is typically very slack, and so you need to allow it a big bowl for rising.  If the dough isn’t kept moist, and preferably in an airtight container, while it rises, it will develop a crust which will limit how much it can rise and change the structure of the bread.

I like to use this pyrex mixing bowl set not only because they’re inexpensive, but also because they come with lids that keep an airtight environment.  I also use these for soaking beans, lentils, grains, nuts and seeds.

Lastly, in order for your no-knead sourdough bread to develop its characteristic airy crumb and crackly crust, it needs to bake in a hot, moist environment.  Since most homes aren’t equipped with steam-injection ovens, a sturdy cast iron Dutch oven will do the trick.  This keeps the bread hot, and because the steam from baking has little opportunity to escape it remains in the Dutch oven, creating a beautiful crisp and crackly crust.

You can substitute bread flour or all-purpose flour for high-extraction flour. If you do not have einkorn flour, substitute spelt or wheat.
Tried this recipe?Mention @nourishedkitchen or tag #nourishedkitchen!