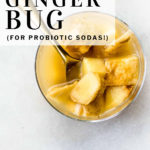 A ginger bug is a wild-fermented starter culture made with sugar, ginger, and water. It takes about a little less than a week of daily diligence to make one, and you can use it to make probiotic, naturally bubbly soft drinks, sodas, herbal beers, and tonics.

Jump to Ginger Bug Recipe | What is it? | Brewing Tips

What is ginger bug?

Ginger bug is a slurry of fresh ginger, sugar, and water that has been allowed to ferment until bubbly and foamy. Brewers use the bug to brew fermented drinks and drinks like root beer, ginger beer, or probiotic lemonade.

How does it work?

When you mix ginger and sugar together with water and let it sit, the wild bacteria and native yeasts in your kitchen and on the ginger itself begin to proliferate and grow. These wild microorganisms eat the sugar in your bug and produce carbon dioxide as a result.

When mixed with sweetened herbal tea, fruit juice, or another base, the microorganisms in the ginger bug consume the sugar in the tea or juice. As they do, they reproduce and emit carbon dioxide that gives homemade soft drinks their bubbles.

What Are The Benefits of Ginger Bug

Since ginger bugs are fermented foods, they're naturally rich in probiotics, namely lactobacillus bacteria, and wild yeasts. These organisms help to support metabolic and digestive health as well as the immune system.

Ginger is a wildly popular culinary herb, and it also has medicinal properties. Herbalists use ginger to support blood sugar regulation, ease nausea, and support digestion (3). And ginger shows promise in easing morning sickness (4) and migraine (5).

So while brews made with ginger bug are still treats, they're far better for you than regular soda.

Don't confuse ginger bug and ginger beer plant. While they're both rich in probiotics and used to make natural sodas, they're two different things.

Ginger bugs are wild-fermented starter cultures that rely on the native yeast and bacteria of your kitchen to become bubbly.

By contrast, ginger beer plants are a SCOBY (symbiotic culture of bacteria and yeast) very similar to water kefir and made primarily of the yeast Saccharomyces pyriformis and bacteria like Brevibacterium vermiforme (1). That SCOBY produces tiny, gelatinous crystals that you feed sugar water, lemon, and ginger.

You can make a ginger bug at home, but you must purchase a ginger beer plant. Or, at the very least, know someone who brews it.

How to Make Ginger Bug

Making a ginger bug is simple. You'll need organic, unpeeled fresh ginger, sugar or another caloric sweetener, and water. It takes about 5 to 7 days to make a ginger bug and may take less time in warm climates and less in cool climates.

On the first day, you'll mix water with sugar and ginger and allow it to culture in a sealed jar for 24 hours. Then, every day for 4 to 6 days afterward, you'll need to add a small amount of fresh ginger and sugar to the bug.

If your ginger bug begins to foam and bubble or if it smells yeasty like bread or beer, it's ready to use. And you can use it right away or transfer it to a fridge for up to 1 week.

Rate this Recipe
5 from 13 votes

To Start the Bug

To Feed the Bug

To Use the Bug

How to Use Ginger Bug

To make soda from your ginger bug, strain about ½ cup liquid from your jar and stir it into 7 ½ cups of sweetened herbal tea or fruit juice. Pour the tea or juice into flip-top bottles.

Remember to leave ½ to 1-inch head space. And then let your homemade soda culture at room temperature for up to 3 days. Then, transfer the bottles to the fridge and enjoy them within a few months.

It's important to use fruit juice or sweetened herbal tea when you make homemade, naturally fermented sodas. The bacteria and yeast in your bug thrive on sugar. Without it, your soda and beers won't ferment properly.

Try your ginger bug in these recipes: