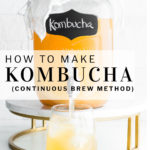 If you drink kombucha, you know that those little bottles of bubbly brew that you buy at the grocery store can really start to add up. But, if you make it at home, it costs a lot less. Plus, you can flavor it with herbs and fruit to make it distinctly your own. And it's even easier when you make continuous brew kombucha.

Jump to Recipe | What is it? | Benefits | Getting Started | Maintenence

What is continuous brew kombucha?

Continuous brew kombucha is a brewing technique that allows you to have a constant supply of kombucha. Unlike batch brewing, which is done in jars, continuous brewing uses a larger vessel equipped with a spigot. This method allows you to draw off finished kombucha when you like rather than all at once.

Since you only draw off up a little kombucha at a time, continuous brew tends to ferment faster and more efficiently. Further, this technique also significantly reduces the amount of time it takes to brew kombucha, including clean-up.

Most commercial kombucha producers use the continuous brew technique because of its ease and efficiency. However, it's also well-suited to the home brewer who may only need a gallon or two a month.

How does it work?

Continuous brewing is a simple process and tends to be easier and less time-consuming than brewing single batches. You start by making a large volume of kombucha. Most homebrewers find that 2 gallons are sufficient, but others make more.

When the kombucha finishes its first brewing cycle, by producing a baby SCOBY and acquiring a pleasant sour-sweet flavor, you can draw off about ⅓ of the finished kombucha. Next, you replace that volume with fresh sweet tea, continuing this cycle indefinitely.

And just as you can use this method with kombucha, you can also use it to brew jun as well.

The continuous brew method is an easy, efficient, and low-maintenance approach to making kombucha at home. Both continuous brew and batch brewed kombucha will taste pleasant with that distinct sour-sweet flavor, and will offer the same nutritional benefits, there are some distinct practical advantages to continuous brew.

What You Need to Get Started

To get started with continuous brew kombucha, you'll need basic kombucha ingredients as well as a vessel equipped with a spigot for brewing.

There are three primary ingredients you need to make kombucha, whether you make it in batches or in a continuous brew container. You'll need a kombucha mother or SCOBY, tea, and sugar.

Choose a continuous brew container that can hold at least 2 gallons and up to 5 gallons of liquid. Since you'll need to draw off tea as it brews, your brewer should also feature a spigot. Plastic, wooden, or high-quality stainless steel spigots work best, as kombucha's high acidity may cause spigots made from poorer quality metals to leach.

Kombucha contains a wide variety of bacteria and yeast. And as the tea brews, the heavier yeast tends to sink to the bottom of the brewer while lighter bacteria tend to float. So, for an optimal brewing experience and for the greatest microbial diversity in your kombucha, you'll want a mix of both.

Accordingly, consider purchasing a continuous brew container that features the spigot in the center of the brewer rather than at the bottom.

If you can't find one, remember to stir your kombucha before pouring a bottle from the continuous brewer.

Maintaining a continuous brew system is fairly straight forward once you've established your first batch. It takes a little forethought and small amount of periodic maintenance.

Get the skinny on kombucha.

Kombucha is a traditional fermented drink made from black tea and honey. While its origins are a mystery, researchers believe the brew got its start in ancient China. It's also popular in eastern European countries, like Russia, and is increasingly popular in the United States where you can find it on many grocery store shelves.

Fortunately, it's also super easy to make. And if you want to get more from home-brewed kombucha, check out these posts.

Troubleshoot your brew, and make sure you're not making any of these big-time kombucha brewing mistakes.

Tea contains fluoride, and if you're worried about the fluoride content of your kombucha, read this.

If your brew is too sour, consider using it to make kombucha vinaigrettes as they work well over roasted beets and even this autumn fruit salad.

Try using it to make a kombucha slushie or as the liquid in your morning smoothie for a boost of probiotic goodness.

You can also flavor your brew with fruit juice and spices, and we're partial to this cinnamon spice kombucha during the holiday season.

Flavor your kombucha with ginger and honey for a Ginger Kombucha.

Give these fermented drinks a try next