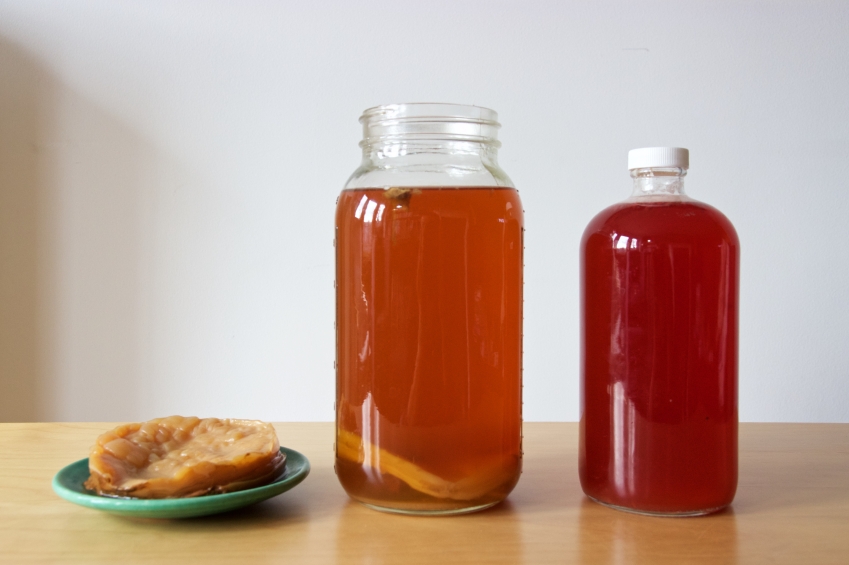 If you're new to brewing kombucha, or if you're having trouble with your current batches of home-brewed kombucha, it's always a good idea to revisit common mistakes you might make and to make sure you follow some simple, best practices to ensure that your kombucha comes out right, and that your kombucha mother stays healthy.

For many of these common mistakes, you won't see their effects immediately; rather, they affect how well your kombucha brews (and reproduces) over time, making it harder and harder to troubleshoot and frustrating to brew.

The quality of your kombucha depends entirely on the health of your scoby (symbiotic culture of bacteria and yeast).  When that scoby is compromised in the way you care for it, or when that scoby is of poor quality because it's been stored improperly, it's flimsy or its cultures have been compromised, it will make brewing more difficult, especially for first-time kombucha brewers.

Look for a scoby that is thick, healthy and strong and that comes from a high-quality source that specializes in kombucha and kombucha brewing.   The scoby should be thick, robust, and it should come with plenty of starter tea.  Whether you buy your scoby, or acquire it from a friend, for best results make sure it hasn't been stored in the fridge and that it hasn't come from an original culture that was treated with vinegar.

A robust and healthy scoby, or mother culture, ensures that your kombucha gets off to the best start and that you meet with success from the beginning.  For those of you considering starting your kombucha mother from a bottle of commercially brewed kombucha available at your store, read this first.

We recommend Kombucha Kamp as they specialize in producing kombucha mothers and starters for the home brewer and have excellent customer support so that if you have questions about brewing, they're always there to answer you personally and help you troubleshoot.

Tossing Your SCOBY in the Fridge

The kombucha mother (or scoby) is a collection of living microorganisms, and, as with all organisms, their environment can either support their health and proliferation, or it can damage them.  The bacteria and yeast that make up a kombucha mother are sensitive to both excess heat and excess cold.  Often new brewers, and even long-time brewers who don't know otherwise, will store their kombucha mother in the refrigerator until they're ready to brew.

Over time, the excessive cold of the refrigerator damages the fragile microorganisms within that scoby, weakening it.  A scoby that has been stored in the refrigerator is more likely to become contaminated with mold, and to produce weak kombucha or kombucha that doesn't properly culture.

Instead, create a scoby hotel to store your excess kombucha mothers and babies.  The Big Book of Kombucha offers some excellent tips on what to do if you've already stored your scoby in the fridge in addition to other troubleshooting tips and guidance on making kombucha.

Novice brewers will sometimes rinse their scoby before adding it to sweet tea to brew kombucha, much as you might rinse a handful of cherry tomatoes before tossing them into a salad.  A scoby, by contrast, doesn't need rinsing.  You'll rinse away some of the microbes that are responsible for helping your sweet tea to transform into kombucha, so, as a best practice, move your scoby directly from one batch of kombucha to the next, with minimal handling and it'll do just fine.  If you drop it, you might consider giving it a rinse to remove excess debris it may have picked up on the ground.

Storing Your Kombucha in Direct Sunlight

Adding Vinegar to Your Brew

From time to time, you see recommendations to add apple cider vinegar to your first batch of kombucha.  Adding vinegar the first time you brew kombucha is intended to acidify the sweet tea, and, theoretically, help the kombucha to take root and get started.  The truth is that you never need to add vinegar to your kombucha; rather, you need a SCOBY and a starter tea which should come with any kombucha mother that you purchase or that is given to you.

Adding vinegar, particularly apple cider vinegar, can introduce vinegar eels - a small nematode that thrives in acidic environments and feeds off of kombucha mothers.  While harmless to humans, they can weaken your kombucha scoby and damage it (and its ability to brew kombucha) over time.  Vinegar eels are a very common blight in the vinegar industry, and particularly so for apple cider vinegar.  The only way to eradicate them is to use sulfur dioxide or pasteurization (source), neither of which you want to use in your brewing.

Vinegar eels are another reason to make sure you're using a high-quality kombucha mother from a reputable sources (like this one), as unsuspecting home brewers may have used contaminated vinegar in their initial brews and then passed on resulting mothers to their friends, unaware that they're also passing on vinegar eels, too.

The kombucha SCOBY and kombucha starter tea work together to transform sweet tea into kombucha.  Young kombucha tea, less than six days old, isn't sufficiently inocculated with enough bacteria and yeast to support the continued brewing of kombucha.  So if you repeatedly brew kombucha tea with weak starter tea, instead of mature starter tea (7+ days old, bright and tart), over time your kombucha may become weaker and weaker.

When you steep black tea in hot water, you release tannins and other components of the tea into the water.  Properly steeped and well-brewed, tea elicits extraordinary flavor, but when that tea is oversteeped it can become very bitter and unpleasant.  Oversteeping also leads to super strong, assertive kombucha with unpleasant bitter overtones.  Moreover, regularly using oversteeped tea - like tea infused overnight, can weaken the coby over time.

Instead, for best flavor, consider steeping tea according to recommended brew times.

Adding Flavors to Your First Ferment

Kombucha flavored with citrus, herbs, fruits, herbs and spices is delightful, especially when you take the time to concoct your own favorite flavor profiles, but one of the biggest mistakes new brewers make is adding flavorings to the initial batch of kombucha.  Brewing flavored and fizzy kombucha is a two-step process with an initial period of fermentation in an open vessel with strictly tea and sweetener followed by a second, shorter period of fermentation in a sealed bottle with brewed kombucha tea and flavorings.

Herbs and spices, as well as fruits can compromise the growth of the SCOBY, especially over time either by contaminating the SCOBY with mold spores, as in the case of berries, or by damaging the kombucha mother with their natural antimicrobial properties.  Your best practice is to keep flavorings for the second ferment, and if you'd like to experiment with flavoring the first ferment, remember to always keep a kombucha mother brewing in just sweetened black tea in case you have to start over.

Not Stirring Your Kombucha Tea

If you've ever opened up your bottles of kombucha tea after the secondary ferment only to find that some of them practically explode with fizz while others are flat, you probably felt pretty bewildered and a little frustrated.  The fizziness of kombucha largely, though not entirely, comes from the action of naturally occurring yeast.  The yeast tend to fall toward the bottom of the brewing vessel as the kombucha tea cultures.  So if you pour kombucha tea directly from your brewing vessel into your bottles, then that yeast will not be evenly distributed.  As a result, some bottles will be super fizzy and others flat.

As a solution, after you've removed the kombucha mother and some starter tea for your next batch, consider stirring the remaining tea to evenly distribute the yeast and bacteria before pouring them into your bottles for the second ferment.  You'll have much more even results.

Many of you are likely looking to cut down on your sugar intake, or cut it out completely, so you might consider brewing with a noncaloric sweetener such as stevia (read more about stevia here), xylitol, erythritol, or another noncaloric sweetener.  It sounds good in theory: you're still brewing kombucha, but without all the sugar, right?

Here's the problem, the bacteria and yeast that make up the kombucha mother and actually brew your kombucha tea need the calories that come from sugar in order to thrive and do their work.  Trying to substitute a noncaloric sweetener for sugar effectively starves those microbes, and doesn't support the fermentation process needed to transform tea into kombucha. Instead, use a caloric sweetener like white sugar to brew your tea, and if you're still concerned, consider avoiding kombucha and choosing other fermented foods, like homemade sauerkraut or sour pickles, or beverages like Beet Kvass instead, none of which require added sweeteners.

If you want to take your kombucha brewing to the next level, or if you want to just get started on the right foot, make sure to check out the Big Book of Kombucha, by Hannah Crum and Alex LaGory.  It's a fascinating book that goes into the history and science of kombucha brewing while also providing easy recipes, simple tutorials, flavoring guides and great resources on trouble shooting your brew.

They're also the folks behind Kombucha Kamp, which is where I buy my supplies for brewing kombucha and jun tea (kombucha's lighter cousin).