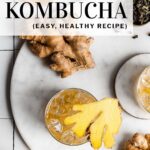 With its sweet, tart flavor and spicy edge, this ginger kombucha recipe is always a favorite. It's easy to make, and a great way to give a little life to your own homemade kombucha. It's easy to do, and similar in flavor to classic ginger beer - only with a decidedly tart finish.

Jump to Recipe | What is it? | Ingredients | How to Make It | Tips | Variations | Common Questions

Ginger kombucha is one of the most popular flavors, and you make it by flavoring kombucha tea with ginger root and a source of sweetener, such as honey, fruit juice, or sugar. The result is a fizzy probiotic beverage that has a gingery zip coupled with a pleasantly sweet, sour flavor reminiscent of apple cider vinegar and black tea.

In addition to prepared kombucha, which contains black tea and sugar, this version also uses ginger and honey. Both the ingredients and technique are simple.

How to Flavor Kombucha

There's a three-step process to making any flavored kombucha that you'll need to follow.

The initial or primary fermentation for kombucha is typically done in large jars using only black tea and sugar, as this keeps your SCOBY healthy and vibrant. Adding flavorings to the initial brew can compromise the culture's health and its ability to reproduce in the future, so you add flavorings during the second fermentation. Bottle conditioning, or transferring the brew to the fridge for a few days before drinking, is the final step and it helps make the kombucha fizzy.

While brewing your own kombucha can seem complicated, the process is deceptively simple. If you can boil water or make tea, you can brew your own kombucha, too. With that in mind, there are a few tips you'll want to keep in mind.

Ginger's fiery energy is a natural match for this sweet-sour fermented tea. In this easy ginger kombucha recipe, you start by making a ginger-infused honey syrup that will flavor your kombucha. The end result is zippy, sweet, tart, and wonderfully delicious - especially when served over ice.
Print Save RecipeSaved! Click to Remove Ads

For the Ginger Syrup

Add lemon. For a lemon-ginger kombucha recipe, add the juice of 1 lemon to the ginger syrup before stirring it into the kombucha for the second fermentation.

Make apple-ginger kombucha instead. Use only ½ cup ginger syrup, and then add ¼ cup apple juice or soft apple cider instead.

Make a green-tea option instead. Ginger works well with both green tea and honey, so you can use jun tea in place of kombucha for a lighter flavor (and less caffeine).

Try adding berries. Ginger is a delicious partner for both blueberries and raspberries. So try mashing ¼ cup of mixed berries into the ginger syrup while it's still hot. Once the syrup cools to room temperature, strain it all through a fine-mesh sieve and then add it to your kombucha for the secondary fermentation cycle.

Try adding peaches. Like berries, peaches are a natural match for ginger. Dice 1 peach and then mash it with the ginger syrup while it's still hot. Once cool, strain the ginger-peach mash and then add the syrup to your kombucha.

Add other spices to the mix such as coriander, cinnamon, or star anise. These will release their deep aromatic notes into the honey syrup, and ultimately into your booch, too.

Add mint. Mint is also good for the digestive system and it's a delicious addition to any ginger kombucha recipe.

Where do I find prepared kombucha tea?

You will need to make your own kombucha using a SCOBY. This is called the initial fermentation, and you can use the continuous brew method or the batch-brew method.

How long does it last?

Homemade kombucha will last for up to 3 months in the fridge. Remember that cold temperatures slow, but do not completely halt, the fermentation process so your brew may grow increasingly sour with storage.

How do I prepare the ginger for kombucha?

I recommend chopping fresh ginger into ¼-inch dice. If you're using organic ginger, you can keep the skin on as long as it's free from dirt and other debris. Some people prefer to grate the ginger using a microplane instead.

Where do I find a kombucha SCOBY?

You can order a kombucha SCOBY (also called a mother or mushroom) online here.

How do I make kombucha fizzy?

When kombucha ferments, the bacteria and yeast release carbon dioxide. A sealed jar or bottle will trap the carbon dioxide, leaving no place for it to escape. As a result, the kombucha will become fizzy.

Can I use dried ginger or ginger powder instead?

Use fresh ginger for your kombucha when you can. It's generally affordable and easy to find in most grocery stores and natural foods stores If you can't find fresh ginger, try dried cut and sifted ginger, but avoid ginger powder.

Ginger powder can leave your kombucha with thick, sticky sediment that's difficult to clean out of the bottom of the bottle.

Can I use ginger juice?

Yes, you can mix ginger juice with a little bit of honey or other caloric sweetener and use that to flavor your kombucha. For many people, this is the easiest way though the flavor may be lighter.

Can I use mason jars instead of flip-top bottles?

If you want fizzy kombucha, you'll need to seal the bottle (or jar) tightly so that the carbon dioxide that builds up during fermentation can't escape. The best approach is to use high-quality, thick-walled bottles with flip-top lids that clamp easily.

If you don't wish to purchase them, you can use any other bottle or jar with a tight-fitting lid, keeping in mind that it's a less effective solution long-term.

I thought honey was bad for kombucha?

While kombucha tea is traditionally fermented with black tea and honey, you can use honey in the second fermentation or bottling conditioning phase since the honey doesn't come in contact with the SCOBY or mother.

Additionally, some styles of kombucha, such as Jun, are brewed using green tea and honey.

Try these fermented drinks next