Last May, we packed our bags, and wove our way through western Europe, visiting farms and markets on the hunt for the traditional foods of the old world.  We camped at a dairy in the English countryside, visited Paris’s oldest street markets, stayed at a traditional Swiss dairy farm, and visited farms in Iceland as well as in Italy where we met up with Jovial Foods and several Nourished Kitchen readers for week of celebration of real food, traditional cooking all while enjoying the rich culture and heritage of the  region.

There, in Italy, as a guest for Jovial Foods, I met with long-time readers and taught a week-long traditional foods retreat.  People gathered from the US, from Poland, from France, and we settled in to an 18th century villa nestled in the sprawling expanse of the Tuscan hills. 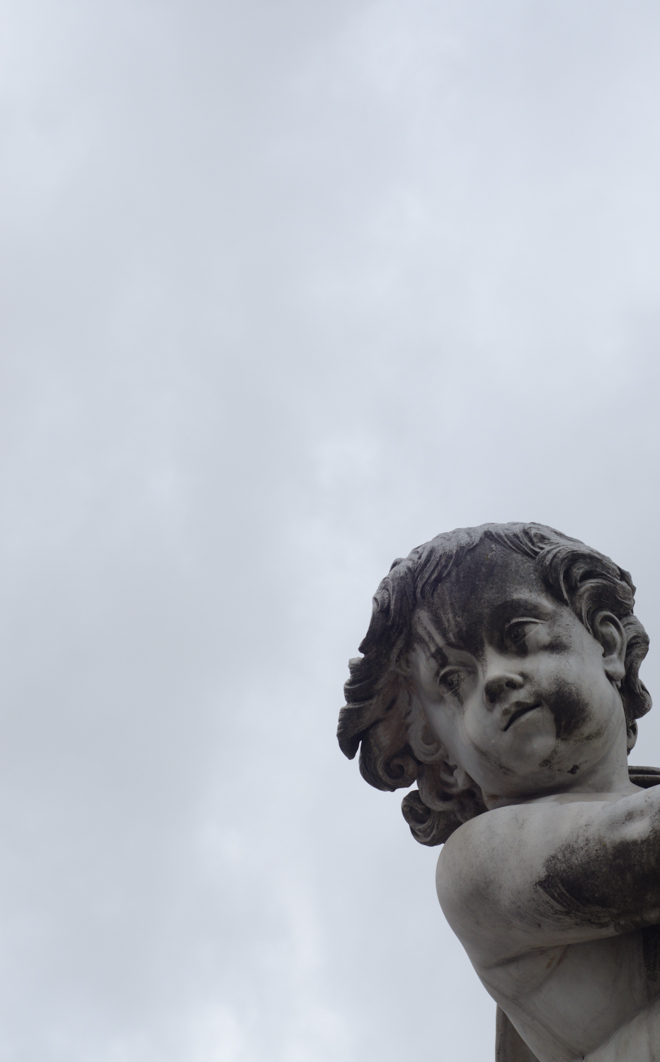 We arrived in Lucca late in the evening after having traveled by rail from the coast of southern France,  the night grew dark, and we made our way, exhausted from travel, to the kitchen of the large villa where we met Shauna an Danny of Gluten-free Girl and the folks at Jovial Foods who had just finished up a gluten-free retreat (there’s another gluten-free retreat planned for autumn – check it out here).

We ate, and we drank, and the children danced late into the night until they fell into their beds, exhausted and worn.

The next morning, as guests from the previous week left, guests for the traditional foods retreat arrived, one-by-one.  Many I’d known for some time through emails, or through Nourished Kitchen’s Facebook page.  Others had been long-time subscribers to meal plans or cooking classes, and others still were new readers.  But we had all come together in celebration and in joy, with a love of traditional food and an eagerness to explore Italy’s heritage and culture. 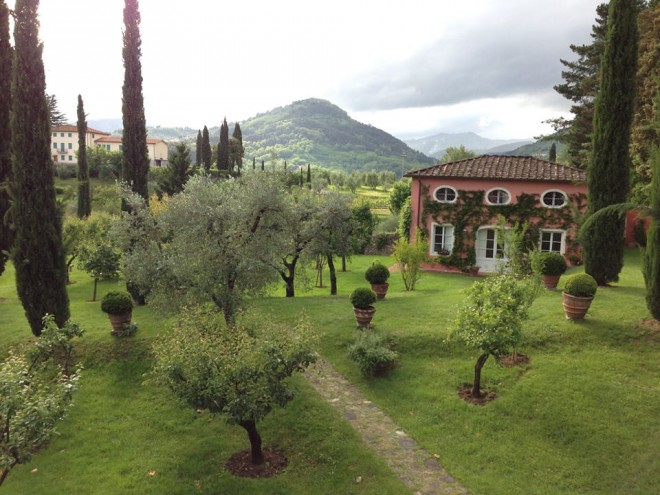 The villa that hosts the retreats sits on expansive grounds, and every garden, every hedge holds the promise of food and flavor.  Olive, quince and other fruit trees decorate the gardens.  Each hedge is made of sweet bay, and entire bushes of rosemary spring up from the wet earth.  Jovial kept the fridges in the villa stocked with vegetables, local cheeses and charcuteries while the pantry was full of wine and fresh fruit.

My husband spent most of our time at the villa, prepping for the workshops, or watching as our little boy played in the pool or at the playground.  We ran workshops on fermentation, seasonal vegetables, nose-to-tail eating and sourdough baking, and in the evenings we’d gather together in the kitchen over wine, and leftovers, to laugh, chat and discuss the outings – for the villa isn’t all that far away from Pisa and Florence. 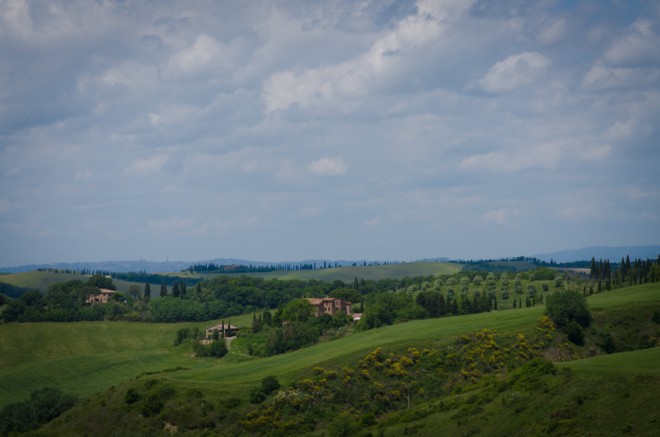 Throughout our time in Italy, what struck me most was the profound integrity of food production from the soil to harvest, from harvest to preparation and preparation to plate.  In this way, I rediscovered a lagging sense of inspiration, one that I had not found since discovering the traditional foods movement 7 years ago; that is a true celebration of food for what it is – and an embracing of taste, texture and origin.

While this sense of honor and celebration of wholesome, traditional foods infused our entire week in Italy, it was never more pronounced than when we visited one of Jovial’s einkorn farmers just outside of the historic city of Siena.  While we saw the lush green hills of the expansive farm, the farmer discussed with us the critical importance of biodiversity, of rotating crops (he grows only ancient grains), and of honoring the land through biodynamic and organic methods, illustrating that these methods that are economically and ecologically sustainable can be employed on a large scale.

Further, we saw his production facilities, including where the grains are sifted, sorted and packed in a way that ensures freshness, minimizing the chance of oxidation and rancidity that challenges poorly stored grains.  Indeed, there is a distinct importance placed on quality and sustainability that runs through all levels of production. 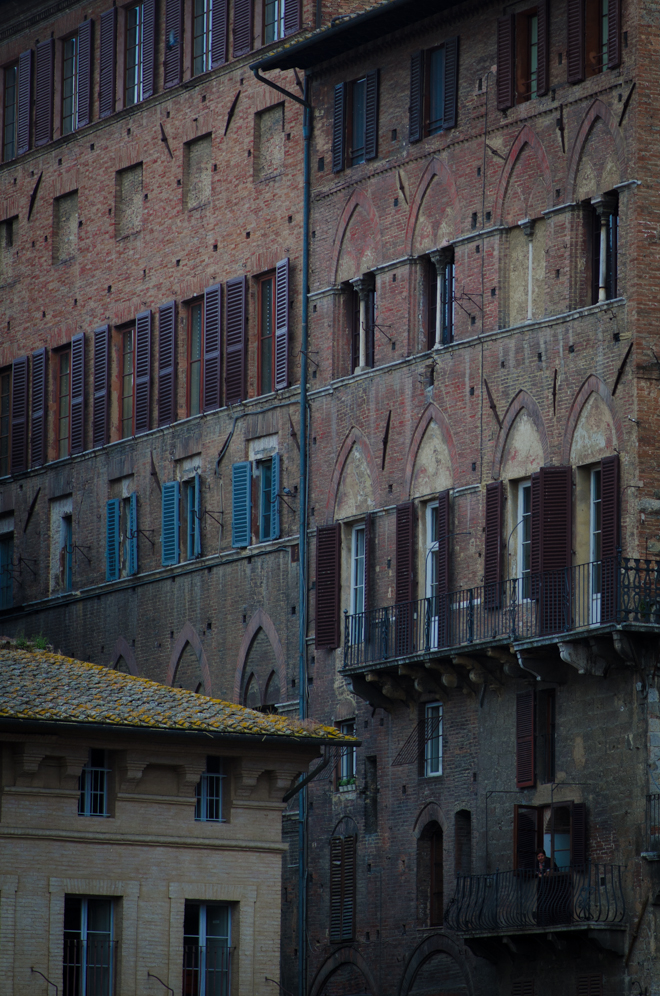 And we celebrated with food, with lots of food, and plenty of wine, too.  While we traveled, and I explained my interest in traditional foods, the people we met gratefully shared their grandmothers’ recipes, or the traditions of their homes.  They were simple foods, humble foods and delicious foods – food without pretense.  Farro and Bean Soup.  Chicken Liver Mousse.  Fava Beans.  Seared Beef Heart. Lamb’s pluck with sweet bay and olive oil.  And lots, and lots of lard.

Among my favorite foods we tried, and there are many, was shared by Carla who started both Jovial Foods and Bionaturae: Lardo Pesto, or Pesto Modenese.  Unlike basil pesto, which combines basil with olive oil and pine nuts, lardo pesto combines lard with rosemary and garlic, and it is impossibly delicious, terribly simple and utterly rustic.  Traditionally served sandwiched in tigelle, or a traditional Italian bread, I serve it slathered over sourdough einkorn flatbread, straight out of the oven and sprinkled with finely grated Parmesan cheese, as an appetizer or an adjunct to a light lunch. 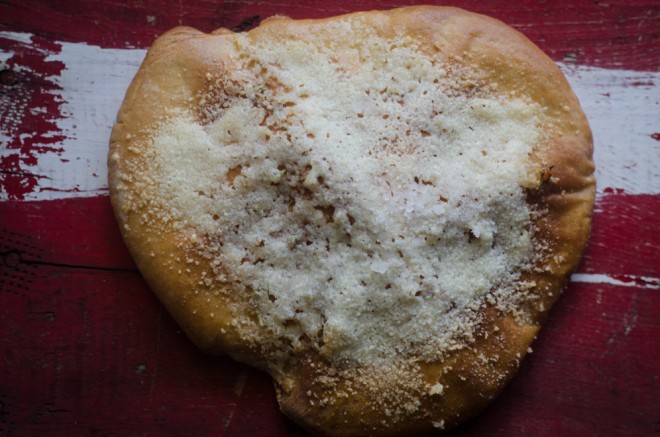 For the Lardo Pesto

If you cannot find lardo, a traditional salt- and herb-cured pork belly fat, you can substitute rendered lard or fresh pork belly. Learn how to render lard here.
Tried this recipe?Mention @nourishedkitchen or tag #nourishedkitchen!