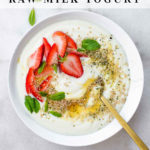 Raw milk yogurt has a thin, delicate texture and a lovely, light tartness. You can make it at home very easily. Serve it plain with fresh fruit and a drizzle of honey or make homemade yogurt panna cotta for a special dessert.

Jump to Recipe | What is it? | Starter Culture | Tips | Thick Raw Milk Yogurt

What is raw milk yogurt?

Raw milk yogurt is yogurt that has been prepared using raw, rather than pasteurized milk. It has a thin, drinkable consistency similar to milk kefir, and a lightly tart flavor.

Like homemade yogurt made with pasteurized or scalded milk as well as other cultured dairy products, it's very high in food enzymes and beneficial bacteria.

How is it different?

Traditionally, you make yogurt by whisking the starter into pasteurized or scalded milk. After that, you let it culture for 6 to 12 hours. Scalding or pasteurizing milk denatures its proteins. This process makes them "sticky." Accordingly, it's easier for those proteins to coagulate, or thicken as the milk cultures. The result is classic, thick and spoonable yogurt.

When you make raw milk yogurt, you whisk the starter directly into raw or unpasteurized milk. And since the proteins remain in their natural state, they don't coagulate resulting in a thin, rather than thick texture.

Raw milk yogurt also tends to be richer and has a more diverse array of bacteria than yogurt made from pasteurized milk.

Raw milk is naturally rich in bacteria, with some samples containing hundreds of varieties. For the most part, these bacteria are benign or even beneficial, but they can also be a source of pathogenic bacteria that cause serious food-borne illnesses (1).

When you make yogurt, you inoculate milk with a starter culture that's rich in specific beneficial bacteria that will give your yogurt flavor, texture, and many health benefits, too.

These starters include probiotic strains with strong anti-inflammatory activity. That's why yogurt is considered a nutrient-dense functional food. And the bacteria in yogurt help support optimal weight while improving gut, cardiovascular and metabolic health (2). These benefits aren't exclusive to yogurt made with raw milk.

When you make yogurt the traditional way with scalded milk, you can save a little bit of that yogurt to make your next batch. In this way, starter cultures can become heirlooms - preserved and passed on. These starter cultures contain specific strains of bacteria that give your yogurt consistency in flavor and texture.

So, for consistent results, it's best to use a new starter each time you make yogurt rather than preserving a little from one batch to the next.

Further, use the freshest milk possible rather than old or sour raw milk. Bacterial counts in raw milk tend to grow rapidly in just a few days. Accordingly, these cultures may interfere with the bacteria in your starter culture, creating undesirable flavors or textures.

It's easy to make raw milk yogurt. First, you'll need to whisk your starter into your milk, and then let it culture.

Most yogurts culture best at a slightly elevated temperature of about 110 F. So, for best results, you'll need a way to keep your yogurt at a consistently elevated temperature. Some people use a thermos or tuck their jar of inoculated milk into the oven with the pilot light on, but a yogurt maker is a great purchase. You can also use the yogurt setting on your Instant Pot, too.

You'll know your yogurt is ready when it smells and tastes pleasantly sour, and set.

How to Thicken Raw Milk Yogurt

Raw milk yogurt is naturally thin with a drinkable consistency. And for many yogurt makers, this thin consistency is undesirable.

Try these yogurt recipes next