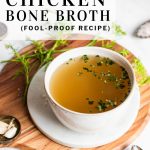 Richly savory with notes of fresh thyme and sweet bay, this fool-proof chicken broth recipe is both easy and delicious. You can sip it on its own or use it to make nourishing soups such as Wild Mushroom Soup or Tomato and White Bean Soup.

Jump to Recipe | What is it? | Tips | Variations | Common Questions

Unlike bone broth, which is made from bones, chicken broth is traditionally made using a whole chicken or the meaty parts of the chicken. It simmers for a shorter period of time and has a delicate flavor. The recipe below also includes onion, garlic, and herbs which improve the flavor of the broth and give it an element of richness.

If you can boil water, you can make good chicken broth. The process is both simple and straightforward. Yet, there takes some nuance and skill to make a homemade chicken broth.

This fool-proof chicken broth recipe is a cinch to make, and it has a rich flavor spiked with fresh herbs. It's perfect for making soups, or sipping on its own.
Prep Time5 mins
Cook Time4 hrs
Total Time4 hrs 5 mins
Servings: 2 quarts
Print Save Recipe Saved!

Lemongrass Ginger Chicken Broth. Add a 2-inch knob of chopped ginger to the stock pot along with the garlic, onions, and peppercorns. Then skip the thyme and bay, and add a 6-inch slice of lemongrass and 6 chopped green onions to the last half hour of cooking.

Vegetable-Rich Chicken Broth. Add 3 chopped carrots, 5 chopped ribs of celery, and a bunch of parsley to the broth to the last half hour of cooking.

Parmesan Broth. Add the rind of a hunk of parmesan cheese to the broth pot along with the garlic, onions, and peppercorns. It gives chicken broth a rich savory note, but may yield a cloudy result.

How do I store it?

How long does it last?

Homemade chicken broth will last about 1 week in the fridge and up to 6 months in the freezer.

Why boil it twice?

Boiling it once, and discarding the water, before boiling the chicken a second time improves the flavor and clarity of your broth.

What can you do with it?

Traditionally, chicken broths such as the recipe above were sipped on their own as a restorative. You can add chopped herbs and a pinch of sea salt for seasoning. Or, you can use it as the base for soup recipes.

How do I know if it has gone bad?

As with most foods, your nose knows. If the broth smells putrid or sour, it's likely bad. It may also take on a viscous texture or turn cloudy.

It's gelatinous. Did I do something wrong?

If your chicken broth gels in the fridge, that's a good sign. It indicates the formation of gelatin, and it will return to its liquid state when you heat it on the stove.

Do I need to add wine?

Wine gives the chicken broth a deeper flavor and a punch of acidity. If you avoid alcohol, you can add a squeeze of lemon instead.

Can I use a chicken carcass instead of a whole chicken?

If you have a leftover chicken carcass, you can use the carcass to make bone broth which relies on bones rather than meat. True broth is meat-based and warrants the use of a whole chicken.

Try these other broth recipes next