Me? I love the rich complexity of a true homemade stock.  I find its rich array of minerals and amino acids deeply fortifying and, as I've mentioned before, I typically try to serve up a quart of broth a day to each member of our family (the little guy gets a pint).  But we travel a good deal both for work and to support our son's homegrown, wildly unschooled and self-propelled education.

Translation?  It's tough to eat real, homemade foods on the road.

So, taking a cue from travelers before me, I began to make our own portable soup - a homemade bouillon that's compact, stores well and for a long time, and that dissolves instantly in hot water for  a beautiful mug of rich, homemade broth.

Portable soup was the first bouillon.  And, like all foods, it was homemade.  Cooks would stew bones in water for hours and hours, reducing the gelatin-rich stock down to a thick, viscous liquid that solidified when cooled.  Later, the thick, gelled broth would be cut and dried on flannel during the cool months where it could be stored indefinitely.

When circumstances took the family on the road, they'd grab the nuggets of portable soup - dissolving them in hot water, sprinkling in salt and cutting in whatever herbs and vegetables they could forage from the roadside.  In an instant, the traveler's would have a meal - but unlike the instant meals of today, this was real food.

Every once in a while, Nourished Kitchen fans will ask for a substitute for bouillon cubes.  Those powdery, salty cubes contain a slew of nasty ingredients: processed fat, MSG, refined salt.  Even Better than Bouillon, sold in health food stores, is loaded with refined, industrial ingredients like maltodextrin; further, it lacks one of the most nutritionally valuable aspects of a true broth: gelatin.

Gelatin in broths, and also in homemade bouillon, soothes the digestive tract which is why gelatin-rich broths play such an enormous role in healing protocols like the GAPS diet.  Gelatin also supports skin health.

Homemade bouillon, made from long-simmered bones, is rich in all the same nutrients found in a good stock: minerals, amino acids and gelatin.  Only it's compact - easy to bring on the road.

where to find good bones and gelatin

A good bouillon depends on good bones.  Most traditional recipes for portable soup - the original homemade bouillon - call for veal knuckle bones which typically produce a beautiful, strong gel, veal bones aren't always available.  You can make homemade bouillon with any good quality bones: chicken, beef, veal, pork.  Bones can usually be purchased for as little as $1/lb from your local ranchers, so ask around at your farmers market.

Using a good quality, purchased gelatin helps to achieve the strong gel that is so essential in producing homemade bouillon. A purchased gelatin also acts as a bit of insurance policy - helping you to achieve that solid gel even if your stock was soft or you were unable to find bones that produce a firm gel like veal knuckle bones or chicken feet.  I use grass-fed bovine gelatin in my homemade bouillon and you can purchase it online (see sources). 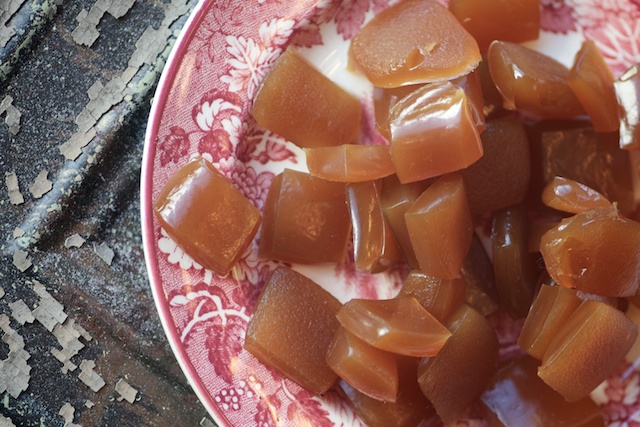 Rate this Recipe
5 from 4 votes

Homemade bouillon or portable soup is a simple, traditional way to keep stock always on hand without having to make it fresh every time. While the bouillon can be made without purchased gelatin, gelatin ensures that the bouillon comes together easily and firms up properly for long-term storage. Do not use vegetable scraps to flavor your stock as they may decrease the length of time you can store the bouillon and they will take much-needed space in your stock pot for gelatin-producing bones. You can purchase good quality bovine gelatin online (see sources).
Cook Time10 hrs 45 mins
Total Time10 hrs 45 mins
Servings: 16 cubes
Print Save Recipe Saved!