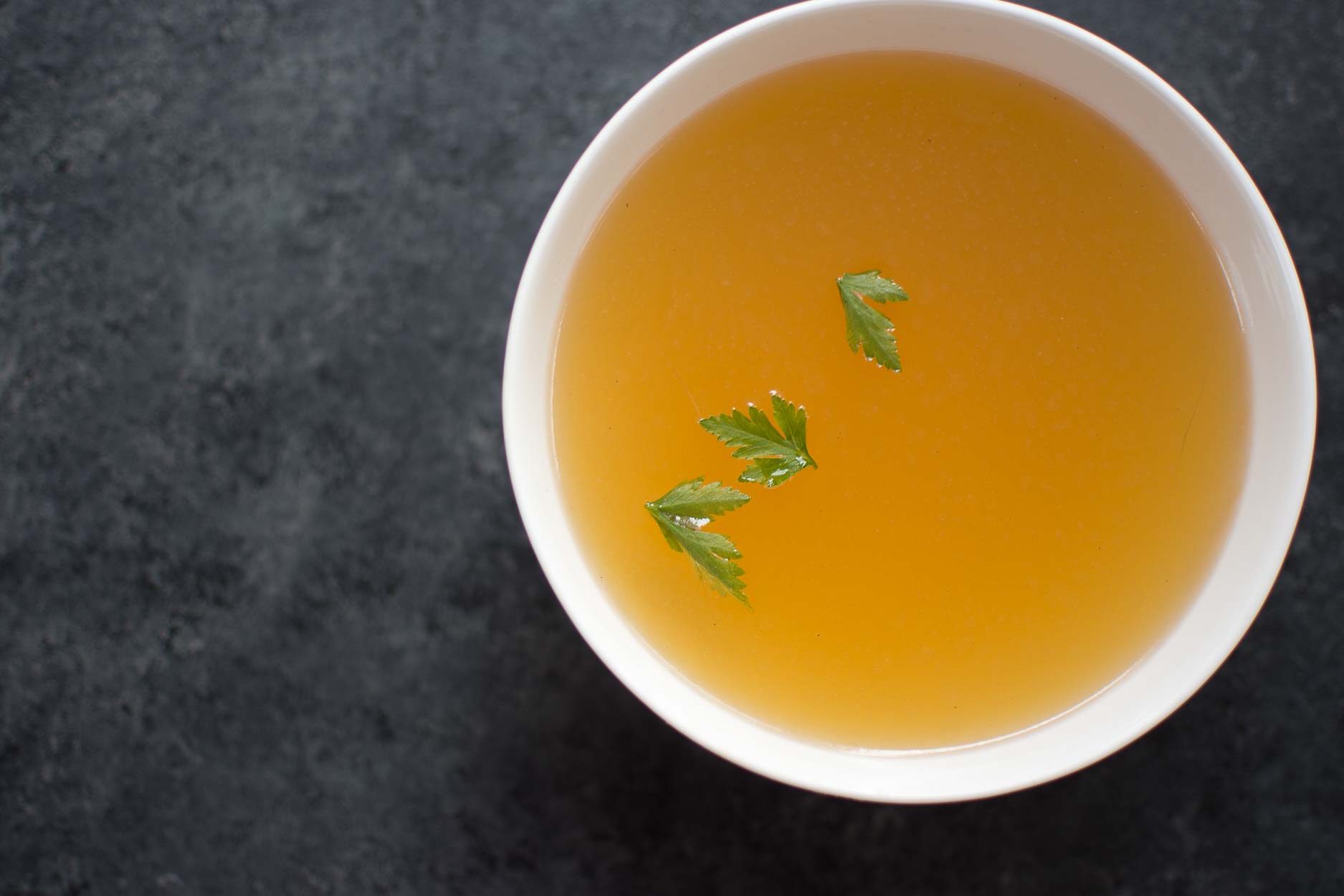 Bone Broth is a staple in the traditional foods kitchen, and a staple in kitchens all across the world.  Its savory, umami-rich flavor helps to give depth to soups, stews and sauces, while its high protein content helps to extend the protein we get from other foods, like beans and pulses.  Properly prepared, bone broth is a wholesome and delicious, protein-rich food that is also relatively easy and cheap to make.

Of course, what you’re after when you make bone broth is not only a marvelously rich flavor, but also a luscious, silky texture that gives soups, stews, sauces and sipping broths body.  That body comes from gelatin, and bone broth makers are always looking to simmer a broth so that it produces a fine gelled structure, sometimes bouncy and sometime sloshy. It can be terribly disappointing for new broth makers to fail to get that delightful jiggle in their broth.

Bone broth gels because collagen, a structural protein found in connective tissue on meaty and gristly bones, breaks down with prolonged cooking, dissolving into the cooking medium.  When the resulting broth cools, the proteins realign themselves and produce a fine, bouncy gelatin.

A good gel is a sign of a good broth, because it signifies that the broth is particularly rich in protein and because that gel, when it reliquifies with heat, gives broth body and an appealing mouthfeel.

First, if your bone broth hasn’t set up and doesn’t gel, it’s still perfectly fine to eat.  It may not be particularly rich in gelatin or protein, and it will certainly lack the body of a properly prepared broth, but there’s no sense in throwing it away.

Many factors influence whether or not your broth will gel, and just a few tweaks in how you select bones for your broth pot, the volume of water you add, how long you simmer your broth and at what temperature you do so may make the difference between a thin, watery broth and one that bounces like the Jell-o you ate as a kid.

Use a Variety of Bones

Bone broths get their gelatin from the collagen in connective tissue, and they get their flavor from meat, and the meat of well-worked muscles like shanks and necks are particularly flavorful.  Not all bones are rich in collagen, nor do all bones arrive with meat adhering to them, so to make a good pot of broth, you’ll need to select a variety of bones to give you that balance of collagen-rich connective tissue and flavor-rich meat.

Marrow bones, though popular, aren’t a particularly good choice for broth making as they lack both the connective tissue that gives good bone broth its gel and meat that gives it its flavor.  Tucking one or two into your broth is a good idea, but simmering a full pot of marrow bones won’t yield a good broth.  Instead, try roasting them or making them into a sweet bone marrow custard or a savory one.

How to Choose Bones for Broth

Adding too large a volume of water to a small amount of bones will yield a thin broth that won’t gel properly.  You’ll extract the collagen from the bones you use, but it will be too dilute to give you a solid gel.

Fill your pot with bones, and cover them with clean water by two inches.  This is generally sufficient enough water to extract the collagen from the bones and make a deeply flavorful broth without being so large a volume of water that your broth will lack flavor and a nice, gelled structure.

Adding an acid, like vinegar or wine, to your bones and water will help extract the collagen in the connective tissue that adheres to those bones.  Despite what you may have read elsewhere, an acid added to the broth pot won’t reliably extract minerals or produce a mineral-rich broth, but it does help to efficiently extract collagen.  Acid is also used in the commercial production of gelatin from beef hides.

Many broth makers will add apple cider vinegar to the broth pot, because it’s inexpensive or because they’ve read Nourishing Traditions.  I find that the flavor is improved when you use wine, not vinegar, to make bone broth and stock and recommend it in my cookbook: Broth and Stock.  So if you’ve popped open a bottle of wine to drink with your dinner, save a cup for the stock pot.

Get Your Temperature Right

A French proverb warns that, “To make a good soup, the post must only simmer or smile.”  In clearer terms, take care not to overboil your broth!

Heat helps to extract collagen from connective tissue, but prolonged exposure to high heat can also break down the structure of that protein so much that the broth fails to gel, and often gets cloudy too.

When making broth on the stove, bring it to a rolling boil over hight heat, and then immediately turn down the temperature to low or medium-low and let it barely simmer, uncovered.  This is generally not an issue with broths cooked in the pressure cooker, but it can be an issue with broths cooked in a slow cooker.  If you’re using a slow-cooker, cook the broth on high until it reaches a boil, and then continue cooking it on low.

Simmer Your Bones Long Enough, But Not Too Long

It takes time to soften connective tissue and to extract collagen from it.  If you cook your broth for too short a period of time, your broth will lack protein and gelatin. Yet, if you cook your broth too long, it will develop overcooked, off flavors that can become particularly unpleasant if you’ve added vegetables to the broth pot which tend to breakdown, tasting at once bitter and overly sweet.

So what’s the right time?

You can cheat (a little)

Remember, if your broth didn’t gel, you can still use it.  But, if you’d still like that wonderful bounce, I’ll give you a little cheat: Add a bit of gelatin!

Bring a quart of broth to a boil on the stovetop.  As the broth warms, dissolve 2 tablespoons gelatin (I use this brand) into 2 tablespoons water.  When the broth boils, stir in the softened gelatin until it dissolves completely.  Turn off the heat and either serve the broth immediately, or transfer it to the fridge to cool.

Quick Tips for a Delicious Broth that Gels

My second cookbook, Broth and Stock, will give you plenty of tips for making wholesome, tasty bone broths and stocks and there’s lots of troubleshooting and tips, too.

You can find bones for broth making at most farmers markets, at natural grocers and online.

If you don’t want to make your own broth, or don’t have time to, it’s worth having a traditionally prepared, slow-simmered broth on hand like this one.

Previous Post: « Gadgets I bought for my kitchen that I absolutely love.
Next Post: Good, Better, Best: Traditional Foods for Every Budget »