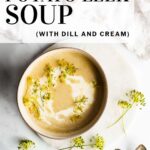 This simple potato leek soup with dill is perfect to serve on a rainy afternoon alongside a big hunk of crusty sourdough bread. Dill's vibrant, aromatic flavor brings a gorgeous punch of brightness to an otherwise mild, autumn soup.

Potato leek soup is rooted in traditional European cookery, and you'll find many variations throughout the continent. In Wales, you'll find cawl cennin while the dish is called soupe aux poireaux or potage parmentier in France. Eastern European recipes for potato soup often call for the addition of fresh dill. In most versions, you simmer leeks and potatoes in broth until tender and then purée them with cream which gives the soup a luxurious, velvety texture. Occasionally, cooks will add fresh herbs, such as chives or parsley, to the soup.

In this version, you'll add chopped fresh dill which brings an element of brightness to the comforting combination of leeks and potatoes.

Potato leek soup typically contains only a handful of ingredients: butter, leeks, potatoes, broth, and cream. This version also contains dill. Since there are so few ingredients, the quality of each one matters as poor-quality broth or lackluster dill can strongly impact the final taste of the soup.

This potato leek soup with dill, like most old-world recipes, is simple to make and requires only a few ingredients and very little effort. Despite its simplicity, there are a few things to keep in mind to make sure it comes out every time.

Rate this Recipe
5 from 5 votes

Try it with bacon. Skip the butter and fry about 4 ounces of bacon in the Dutch oven. Remove the crisp bacon, and then sweat the leeks in the rendered bacon fat. When the soup is finished, stir in the reserved bacon.

Use parsley instead of dill. Parsley is a lovely match for both potatoes and leeks, and you can swap chopped fresh parsley for the dill.

Add some celeriac. Celeriac (or celery root) is a nice addition. Swap up to ½ pound celeriac for the potatoes in this recipe.

What kind of potatoes should I use?

Potato leek soup needs a medium-starch potato, such as Yukon Gold or Yellow Finn. These potatoes have enough starch to break down into a smooth, velvety soup without turning gluey.

Can you make it without cream?

To make a dairy-free version, add additional broth in place of cream and substitute olive oil for butter.

What should I serve with potato leek soup?

We like to serve this soup for lunch alongside toasted sourdough bread and a big green salad.

Can I substitute milk for cream?

Yes. You can substitute whole milk or half-and-half for the cream in this recipe, keeping in mind that the soup may taste slightly less rich.

How do I thicken the soup?

While some recipes call for making a roux from flour and butter, the best way to thicken potato leek soup is to simply purée the potatoes which will thicken the soup naturally. If your soup is still too thin, you can make a slurry of 1 to 2 teaspoons of cornstarch or arrowroot starch and water, and then add it to the soup as it boils.

Where does it come from?

You'll find versions of Potato Leek Soup in most Northern and Eastern European culinary traditions. There are versions of the soup in Wales, England, France, Ireland, Germany, and Romania among others. They often include the addition of various spices (such as black pepper), herbs (such as parsley and dill), or additional vegetables (such as celeriac).

How do I store it?

To store the soup, pour it into a container with a tight-fitting lid, such as a mason jar, and keep it in the fridge for up to 5 days. You may need to add a little broth or water when reheating as potato-based soups thicken in the fridge.

Try these other recipes next