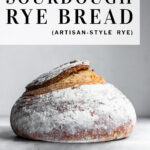 This artisanal-style sourdough rye bread has a dense, chewy crumb that's touched by the lightest swirl of molasses and a sprinkling of caraway seeds. It's made from both light and dark rye flours. Toast it and slather it with butter or chicken liver pâté.

Sourdough rye bread is a traditional, artisan-style bread made from a blend of light and dark rye flours and sourdough starter. Rye flour contains a weaker gluten matrix than wheat flour (gluten is the protein that gives bread structure as they rise). For this reason, it tends to produce a denser bread than wheat and performs poorly with bakers yeast.

At its simplest, sourdough rye includes a sourdough starter, rye flour, and salt. To this basic blend, you can mix in caraway seeds and other spices as well as sweeteners such as honey or molasses. Molasses gives the bread a darker color, depending on the amount you use.

Rate this Recipe
5 from 3 votes
1 boule

Try these sourdough recipes next