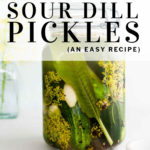 Infused with aromatic garlic and fragrant dill, these naturally fermented sour pickles have a striking sour flavor that'll remind you of the classic, old-fashioned pickles you'll find at a New York deli. Unlike pickles made with vinegar, these slowly ferment in a saltwater brine that's spiked with spices, and that gives them an extraordinary, complex flavor that's both sour and salty all at once.

Jump to Recipe | What are they? |Benefits |Tips |Storage | Troubleshooting

What are sour pickles?

Sour pickles are pickles that you ferment in saltwater brine. The slow process of fermentation gives them a deeply sour flavor with a salty edge that many people find irresistible. Cooks also typically add garlic, dill, horseradish, and pickling spices to the brine which gives the pickles an even deeper flavor.

Are sour pickles good for you?

Like all fermented foods, sour pickles are rich in probiotics. Those are beneficial bacteria that help support gut health, immune system function, and metabolic health (1).

They also contain B vitamins, trace minerals and are a very good source of vitamin K which helps support bone and heart health (2).

To make sour pickles, you'll need to prepare a saltwater brine by warming water and salt together, and then cooling it to room temperature. After that, you'll pack a jar with fresh cucumbers, garlic, dill, and other spices. Next, pour the brine over the cucumbers and seal the jar. After that, all you need to do is wait. And within a week or so, you'll have naturally fermented pickles.

But, as you make your pickles and ready them for fermentation, there are a few things you should keep in mind.

How long should I let them ferment?

While fermentation is steeped in science, it's also an art. And your pickles are ready when they taste pleasantly sour to you. That could be as little as a week, or as long as several months.

How do I store fermented pickles?

When the pickles taste right to you, transfer them to the fridge. Or, you can store them in another cool spot, like your basement or root cellar. Cold temperatures slow down the fermentation process. Sour pickles should keep about a year in cold temperatures.

Rate this Recipe
5 from 3 votes

Sharply sour and infused with the intense flavor of dill and garlic, these sour pickles are made the traditional way, by allowing cucumbers to ferment in a saltwater brine.
Prep Time10 mins
Fermentation7 d
Total Time7 d 10 mins
Servings: 8 servings (1 quart)
Print Save Recipe Saved!

Substitutions: If you don't have flowering dill, substitute about ½ cup fresh dill or a few tablespoons of dried dill.  And if you can't find horseradish leaf, try using grape leaves, sour cherry leaves or even a spoonful of black tea.
Tried this recipe?Mention @nourishedkitchen or tag #nourishedkitchen!

Unlike homemade yogurt, which is easy to make, sour pickles can be finicky. Sometimes it's a totally normal aspect of fermentation. But other times it's a sign that you may need to make some adjustments.