» Home » Recipes » On Food and Cooking » Good Questions: What's Your Take on Stevia? 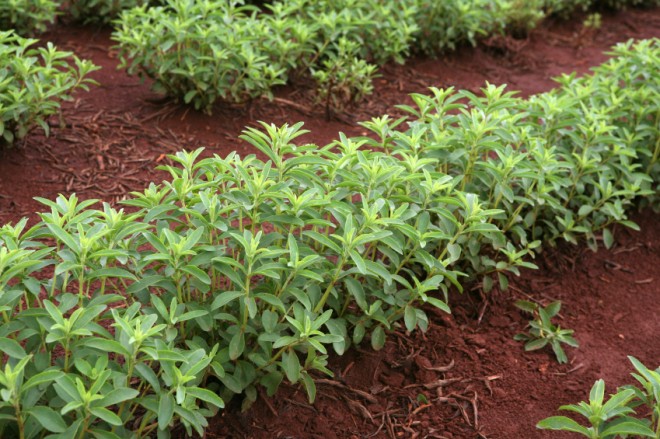 Q: What's your take on stevia?

Stevia must be a hot topic right now, as this question was sent to me twice by email and posted to Nourished Kitchen's Facebook Wall twice this week, too.  So here's the background behind stevia, its traditional use, its modern use and how I approach stevia in my kitchen.

So, here's the skinny on stevia:

Stevia is a South American herb that acts as a natural, noncaloric sweetener owing to steviol glycosides which make stevia sweet.  Stevia-sweetened foods have a thin sweetness with a slow onset that can leave a strikingly bitter aftertaste (not dissimilar to artificial sweeteners like aspartame).  Stevia is popular in the natural and organic foods community because it is noncaloric, therefore considered "healthy" as it sweetens without contributing sugars to the diet, and because it is a natural alternative to non-caloric artificial sweeteners.  It has been used in Japan as a sweetener for decades.

Stevia's traditional and folkloric use among the indigenous populations of South America is not as a sweetener, but as a contraceptive (sources here, here and here.).  So stevia's reimagining as a noncaloric sweetener for natural foods enthusiasts is relatively recent.  And there's some evidence that stevia, does, indeed, have at least a some effect on fertility, especially when taken (you guessed it) in huge amounts, frequently.  Is that a recommendation to avoid it? Nope, it's just something you should know.

Still want my take on stevia?

I don't use it.  I don't care for it, and I generally avoid it.  My choice, of course, has nothing to do with its potential (if debatable) affects on fertility and, rather, focuses wholly on its culinary use.  Quite frankly, I'd rather have a little of the real thing than a little (or a lot) of a facsimile like stevia.  I dislike the culinary properties of stevia.  Where honey and cane sugar and maple syrup and other caloric sweeteners can give body to custards, or lemonades, stevia is thin and wan.  Where caloric sweeteners provide a fullness of flavor to desserts, stevia leaves a bitter and unpleasant aftertaste even when used in small quantities.

I also think it's important to remember how stevia was traditionally used, as opposed to how it's used now.  That is, it was traditionally used as a contraceptive (where it has a strong effect remains the subject of debate), and it was used in its whole form as tea; not as processed powders sweetening cakes, custards, ice creams, sodas and so on.  Just because it contains a noncaloric sweetener doesn't excuse overindulging in junk.

How do I use stevia now? Occasionally I find myself served an herbal tea that has stevia leaves added to it. Meh.  I finish the cup and don't ask for more.

So what if you still want to use stevia?

Well, first, you won't find any stevia recipes on Nourished Kitchen, though you will find an assortment of naturally sweetened recipes to serve for holidays, festive occasions and when you want something a little sweet.

If you have some sort of verifiable medical condition that necessitates the use of noncaloric sweeteners only, then stevia use occasionally isn't going to kill you (though it still won't taste as good as honey, maple syrup, jaggery or cane sugar).  If that's the case, stick to the powdered green herb (available here), and avoid the highly processed stevias sold in grocery stores.  And if you want to make your own stevia extract, here's a good recipe.

Got a question for Nourished Kitchen?

We have SO many new readers in any given week, so if you have a question for me, I'll be posting the answers here at least once a week.  Email your question to [email protected]