Cinnamon sprinkled peaches, or ripe figs in the fall, this faintly sweet custard makes it's way to our breakfast table every season of the year. Wholesome fats and protein plus many vitamins and minerals (calcium, iron, zinc, phosphorous, B-Vitamins, Vitamin K and Vitamin A to name a few), make this a deeply nourishing dish for everyone, but it's infusion of marrow makes in an especially important for children.

As noted by Dr. Price in Nutrition and Physical Degeneration, traditional cultures such as the indigenous people of the Rocky Mountains often made special preparations of marrow for growing children. We're still unraveling all the specific benefits of this revered food, but we have learned a few things. First, marrow contains phospholipids and methionine - two essential components for proper brain growth and overall function. Second, the monounsaturated fats contained in marrow are known to lower LDL cholesterol levels and support cardiovascular health. Also, thanks to a hunch from Swedish oncologist Dr. Brohult, we have a little insight into it's healing capabilities as well.

Drawing On The Scandinavian Tradition . . .

Of feeding children marrow soup to build strength in winter months, Dr. Brohult decided to try a little exercise with leukemia patients in her care:

In an effort to stimulate her patients’ bone marrow to resume normal function, Dr. Brohult administered calve’s marrow to the children in her care. She was operating on little more than a hunch. Parents in Scandinavia have long served bone marrow soup to their children in winter, in the belief that it builds strength. Dr. Brohult reasoned that healthy bone marrow from calves might trigger a resumption of healthy function in humans.

Her hope—and desperation—paid off. Although the results were inconsistent, some of her patients quickly experienced remarkable improvements, including a normalization of white blood cell counts and a striking return of energy. ¹

Dr. Buhult's team traced eventually traced the benefits to alkylglycerols, or AKGs, contained within the marrow. Later studies on AKG's showed that when they were given to cervical cancer patients, tumors regressed even before radiation treatment began! ² 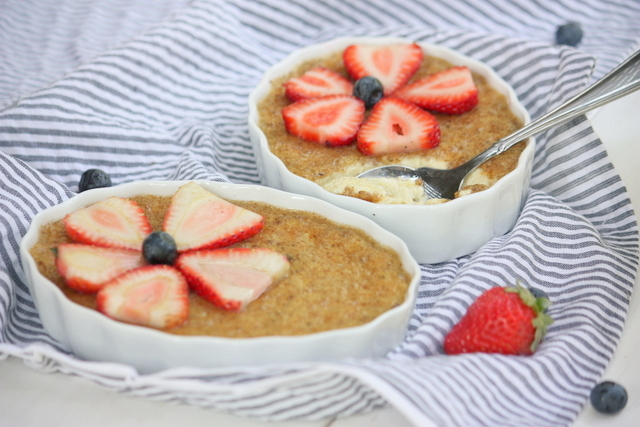 This sweet custard is seasoned with vanilla and served with fresh fruit, but it's creaminess comes from marrow - a potent source of healthy fats and fat-soluble vitamins. Ask for marrow bones at your local butcher shop or talk to your local rancher.
Prep Time10 mins
Cook Time45 mins
Total Time55 mins
Print Save Recipe Saved!

Tried this recipe?Mention @nourishedkitchen or tag #nourishedkitchen!
« The Cheater's Guide to Real Food (or the advice I gave my grandmother)
Red Currant Pie with Buttered Sourdough Crust »