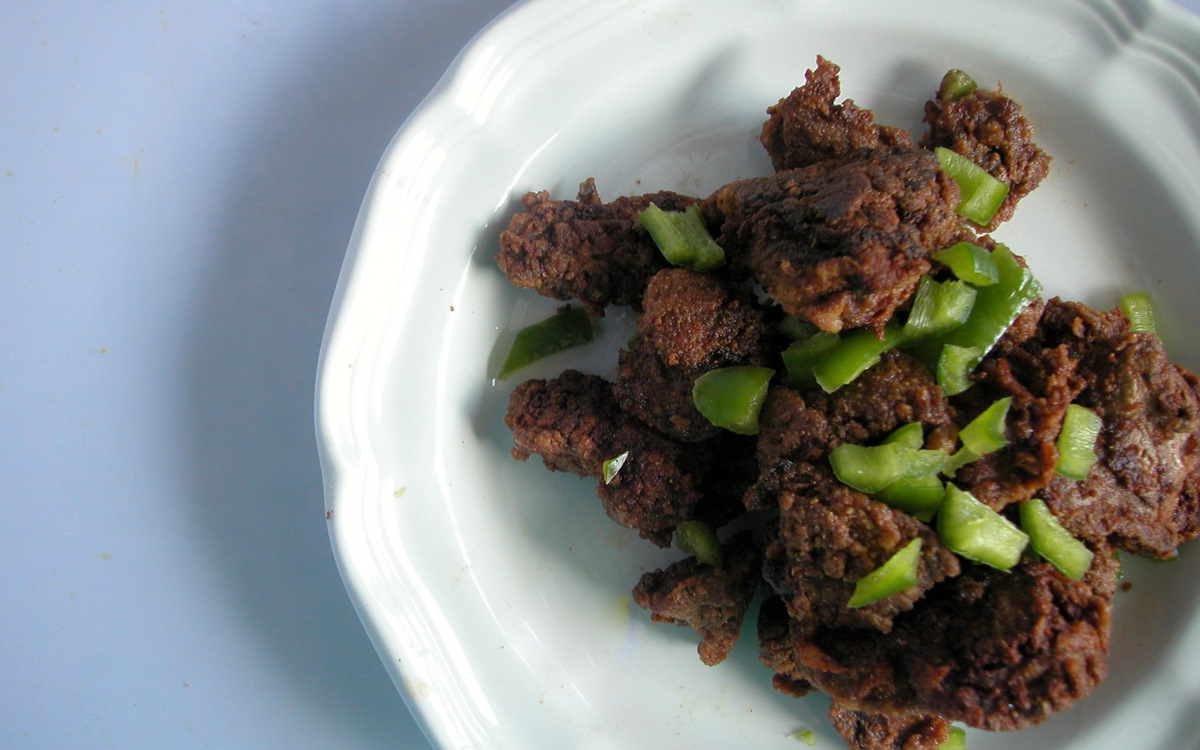 Fried chicken livers.  The words, when rolled off the tongue, evoke images of farm life and of down-home country food. The clean, spicy intensity of New Mexico, or Anaheim, peppers provides the perfect foil for the salty, crunchy chicken livers with their rich, mineral-like flavor.  Growing up, my family would drive from Colorado through the extended monotony of the Kansas countryside until we reached my grandmother's home in Oklahoma where we'd spend our summers.  A treat during these hot, humid Oklahoma summers would be a visit to Rex's for fried chicken seasoned with jalapeños and served alongside Indian fried bread.  While this version varies considerably from the fastfood found at Rex's, the essence of the dish remains the same.

While liver, like many organ meats, is often avoided either out of fear of "toxins" or a general wish to avoid anything but muscle meat, it shouldn't be.  Liver is deeply nutritive and a strikingly rich source of vitamins and minerals making it a nutritional powerhouse of sorts. Just a single ounce of pan-fried chicken livers contains 81% of the recommended daily value for vitamin A and 99% of your body's daily requirement for vitamin B12; moreover, its rich in riboflavin, folate and the minerals iron and selenium1. It is, perhaps, for this reason that traditional peoples prized thriving on unprocessed foods native to their region prior to the advent of industrialized agriculture prized liver and other offal to such a great degree.  It is a sacred food, powerfully nutritive and deeply nourishing.  The key, as with all animal foods, is to ensure that the liver you feed your family comes from healthy chickens - those that have been raised on pasture with access to their natural diet which includes sprouts, grubs, kitchen scraps and a wide variety of foods.  Healthy animals produce healthy foods.

You'll find that, in addition to liver, this recipe makes use of whole grain, sprouted flour as well as freshly rendered pasture-raised lard.  Whole grain, though valuable, is also problematic.  You see, it contains phytic acid - an antinutrient that binds up valuable minerals, preventing your body from fully absorbing them.  There are three methods that effectively mitigate the effects of phytic acid: souring, soaking and sprouting.  Since both souring and soaking take several hours and sometimes full days, using sprouted grain flour eliminates the issues posed by regular whole grain flour.

Just a single ounce of pan-fried chicken livers contains 81% of the recommended daily value for vitamin A and 99% of your body's daily requirement for vitamin B12; moreover, its rich in riboflavin, folate and the minerals iron and selenium

We also make use of freshly rendered lard from pasture-raised hogs - a fat that, despite its bad reputation, offers greater benefit than you might initially think.  Indeed, the most prominent fatty acid in lard is monounsaturated fat - the very same nutritive, healthy fat found in olive oil and avocado.  Indeed, monounsaturated fat comprises about 45% of the fat found in lard1.  Some evidence indicates that the consumption of monounsaturated fats may have the ability to lower LDL (bad) cholesterol while simultaneously raising HDL (good) cholesterol2. Furthermore, pasture-raised lard is one of the richest food sources of natural vitamin D - a nutrient that of which most US children3 and a great number of adults4 show an insufficiency or even deficiency.

So while this dish may contain both liver and lard, know that with each savory and spiced bite you take, you'll consume a powerfully rich combination of wholesome nutrients that play an important role in health: B vitamins, vitamin D and myriad minerals.

Savory and pleasantly spiced by bright green chili peppers, these fried chicken livers are best served alongside a gravy made from mineral-rich chicken stock. My son, just four, can eat an entire plate by himself. I served these once, as snack, and he begged his friends to try them – telling them, “You have to eat the whole chicken: livers, feet and all.” It is good for you, so enjoy.
Prep Time12 hrs
Cook Time7 mins
Total Time12 hrs 7 mins
Print Save Recipe Saved!

Tried this recipe?Mention @nourishedkitchen or tag #nourishedkitchen!
Previous Post: « Butter Your Vegetables: The Role of Fruits, Vegetables & Dietary Fat in Health
Next Post: Green Beans with Bacon and Shallots »