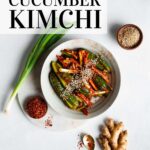 This cucumber kimchi recipe is a cinch to make. You combine small, crisp cucumbers with green onions, garlic, fresh ginger, and plenty of chili for a distinctly fresh side dish that's brimming with bright flavors. It tastes delicious and has a gorgeous, crunchy texture that makes it a great match for grilled meats and fish - especially in the summer months.

What is cucumber kimchi?

Cucumber kimchi is a lightly fermented Korean vegetable side dish. Like kimchi made with cabbage or daikon radish kimchi, it's made with a bit of salt and seasoned gochugaru (Korean-style chili powder), garlic (or garlic chives), ginger, and other ingredients.

The cucumbers are crisp and juicy with a delicate sweetness that's balanced by the heat of chilies. A short fermentation period (often only a day, if at all) gives the kimchi a delicious, light acidity. It's similar to Asian Cucumber Salad in its freshness and flavor profile.

There are two types of cucumber kimchi, including oi kimchi and oi sobagi. The primary difference between the two versions rests in how you cut the cucumbers. For oi kimchi, cucumbers are typically sliced crosswise into thin rounds, and you then season them.

For oi sobagi (stuffed cucumber kimchi), cucumbers are typically cut crosswise into spears (leaving one end intact, similar to how you make preserved lemons). After cutting the cucumbers of oi sobagi, you typically stuff them with your seasoning ingredients.

The ingredients for cucumber kimchi are fairly simple. Cucumbers form the foundation of the recipe, while a variety of ingredients which typically include chili pepper, alliums, carrots, and sometimes ginger provide the seasoning.

In addition, you'll often find that cucumber kimchi recipes also include Korean fish sauce or salted shrimp which give the kimchi a savory, umami note. Further, many recipes also call for sugar which provides a counterbalance to the salt and chili while also accelerating the fermentation process.

How do you make cucumber kimchi?

In this version, you'll start by soaking the cucumbers in a saltwater brine similar to how you make cabbage kimchi. Then, you'll stuff them with a mixture of chili, garlic, green onions, carrots, and ginger, before letting them quickly ferment on your kitchen counter and then age in your fridge for a few days. Making this cucumber kimchi recipe is a relatively easy and simple process.

Tips to keep in mind

While this isn't a particularly complicated recipe or technique, there are a few things you'll want to keep in mind when start making cucumber kimchi. Namely, remember that this is a dish marked by its freshness, and you'll aim to preserve that freshness as best as you can. Also, you'll need to use a delicate hand when cutting and handling the cucumbers, so that they remain intact at one end and you can stuff them easily.

Spicy gochugaru (Korean-style chili flakes) prove to be the perfect match for cool, juicy cucumbers in this simple kimchi recipe. You can eat it right away if you prefer, or let it ferment for a day or two which gives the kimchi a complex, but pleasant acidity. Garlic, ginger, green onions, and sesame seeds round out the flavor.
Prep Time10 mins
Fermentation5 d
Total Time5 d 10 mins
Print Save RecipeSaved! Click to Remove Ads

Eat it fresh. Instead of fermenting cucumber kimchi or letting it age in the fridge, consider eating it fresh as a side dish on a summer night.

Skip the fish sauce. For a vegan (or fish-free) version, skip the fish sauce and use soy sauce instead. Alternatively, you can swap in some Korean-style fermented soybean paste (doenjang) instead.

For a quick cucumber kimchi recipe, slice the cucumbers thinly cross-wise. Then mix them with the remaining ingredients. Next, skip the fermentation process and add a spoonful or two of rice vinegar and sesame oil instead. Eat right away.

Make a kimchi-flavored sour pickle. You can follow the recipe for sour pickles, substituting ginger, gochugaru, and green onions for the dill and pickling spice.

What kind of cucumbers can I use?

This version of kimchi is traditionally made with Korean cucumbers; however, due to limited availability, you can replace them with any small, thin-skinned cucumber such as Persian, Kirby, or Cocktail cucumbers.

The large English cucumbers you find in most grocery stores will work, too; however, you may wish to cut them into 4-inch lengths and remove some of the peel if it is exceptionally thick or if it tastes bitter.

Properly fermented, cucumber kimchi should keep up to 1 week in the fridge.

How do you store it?

Store the kimchi in a glass jar with a tight-fitting lid in the fridge. The cucumbers should stay submerged in their brine to prevent spoilage.

How long do I let it ferment?

Cucumber kimchi only needs to ferment for up to 1 day (and some cooks eat it right away or allow it to sit out only for a few hours). By comparison to sauerkraut and sour pickles, which ferment for an extended period of time, kimchi tends to be fresher and requires less time to ferment.