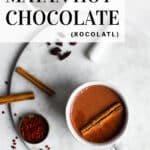 This Mayan Hot Chocolate recipe is wickedly bitter with a delicious creaminess and frothy texture. Elements of spice and chili help round out the bitter brew, making for a delicious alternative to your morning coffee or tea.

Jump to Recipe | What is it? | History | Key Ingredients | Benefits | Tips | Variations | Questions

Mayan Hot Chocolate or cacao is a creamy, bitter drink made with minimally processed, unsweetened chocolate, chili peppers, and aromatic spices such as allspice and ground cinnamon. It has a robustly bitter flavor with a creamy, frothy texture.

If you're used to sweetened chocolate, your taste buds may need a little time to get used to the flavor of unsweetened cacao, but it's worth it. It's richer and more robust than run-of-the-mill hot cocoa.

Hot, spiced cacao was drunk since ancient Mayan times, and it still plays a role in the food and culture of the Yucatan peninsula. Traditionally, the cacao pods were harvested and the fresh seeds of the cacao plant (or cocoa beans) would be collected from the pod.

The cocoa beans, which were covered with a sweet, fragrant milky white coating, would then ferment in the tropical heat. After fermenting for a few days, producers roast the beans until fragrant and dried. The milky white seed darkens after roasting and develops a papery texture.

After winnowing away the papery coating, Mayan chocolate makers grind the beans into a paste using a metate. This chocolate de metate would be mixed with hot water, spices, chilies, and sometimes corn flour to form a bitter, but fragrant drink. Pouring the cacao from cup to cup helped to cool the brew, and it also developed a thickened, frothy texture.

Cacao is still used ritualistically and ceremonially in Mayan culture.

Why this recipe works

Unlike most hot chocolate recipes, which include both milk and sugar, Mayan Hot Chocolate is water-based and omits sugar entirely. As a result, it has a bitter edge similar to strong black coffee. Spices, such as cayenne pepper or other chilies, provide balance to that bitterness.

Where to Find Ceremonial Cacao

Get 5% off with coupon code NOURISHED. 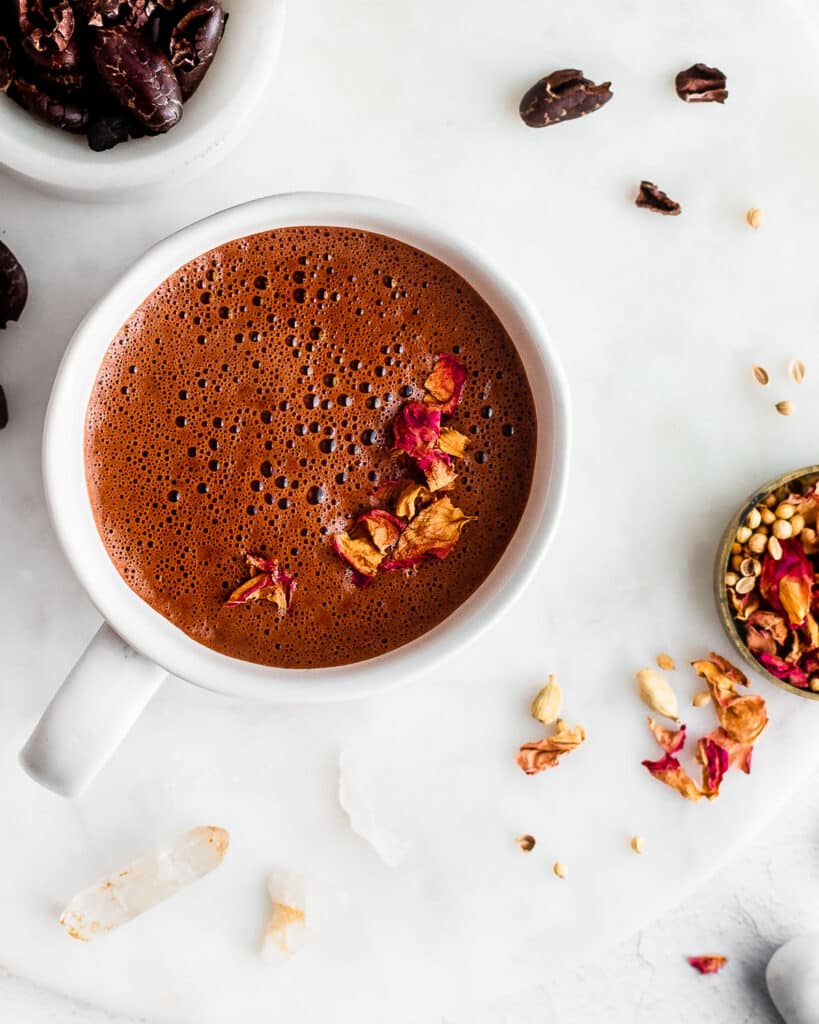 Is it good for you?

Chocolate is known to be high in antioxidants and other anti-inflammatory compounds that promote and support good health, especially for the heart, brain, and metabolism.

But, it also typically contains loads of sugar that can, potentially, counteract those benefits. Because Mayan Hot Chocolate contains no additional sugar, it's one of the purest forms of chocolate.

It's loaded with antioxidants. It has an ORAC value of 49,994 (2) which is over 10 times the ORAC value of blueberries (3). These compounds are higher in minimally processed cacao than they are in more heavily processed counterparts, such as chocolate bars (4).

Cacao may support brain health, and the phytonutrients in chocolate, coffee, and tea may enhance neuroplasticity and prevent neurodegeneration (5, 6).

This Mayan Hot Chocolate recipe is super easy to make, especially with the right equipment. You heat water, melt chocolate, add spices, and then froth it all together until thickened and foamy. The whole process takes just a few minutes.

Wickedly bitter with a spicy edge, this Mayan Hot Chocolate recipe is both warming and energizing. Allspice and cinnamon give it a spicy floral note, while cayenne gives it a piquant edge that cuts cacao's natural bitterness, and annatto lends a little color.
Cook Time5 mins
Total Time5 mins
Servings: 2 servings
Print Save Recipe Saved!

Make it creamy and sweet by substituting whole milk for the water, and adding 2 tablespoons sugar (or more) to the chocolate and spices. Combine milk with the chocolate, sugar, and spices and stir until the chocolate melts, then froth using a milk frother or a small whisk.

If you need a little sweetener to cut Mayan Hot Chocolate's natural bitterness, you can add a little brown sugar, honey, maple syrup, or unrefined cane sugar such as panela. These are not traditional additions, but they can soften cacao's bitter notes. Or, consider making it with dark chocolate instead of unsweetened chocolate.

Adjust spices to your liking. If you prefer it spicier, consider adding more cayenne pepper powder. And if you find the amounts of spice given too spicy, add less. It's easy to adjust this recipe's flavors to your personal preferences.

Vanilla bean can be a nice addition to this hot chocolate recipe, as it lends a sweet, floral note.

What can I use instead of ceremonial cacao?

You can substitute unsweetened baking chocolate for ceremonial cacao. Alternatively, you can also use dark or bittersweet chocolate with minimal sugar content.

What is the Mayan word for hot chocolate?

The Mayan word for hot chocolate is chocolhaa, meaning bitter water. In Aztec, the word is Xocolatl.

You should really drink Mayan Hot Chocolate immediately after brewing it; however, you can store any extra in a tightly sealed container in the fridge, and then reheat it on the stove.

Try these chocolate recipes next