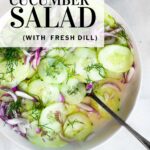 Everyone should have a stash of easy recipes. You know, the kind that you can throw together in 10 minutes. This super simple cucumber dill salad is just that. Fresh cucumbers come together with vibrant dill and sharp red onions in a honey-sweetened vinaigrette.

Cucumbers are summer vegetables in the Curcubit family, and are related to winter squash, zucchini, pumpkins, and watermelon.

They have a cool energy and mellow, light flavor. Because their flavor is so mild, they're a perfect partner for all sorts of vibrant, bright ingredients. Throughout the world, you'll find cucumber salads.

While versions vary from recipe to recipe, most will include alliums, fresh herbs or chilies, and a source of acid and a source of salt. In this version, you'll partner cucumber slices with thinly sliced red onion, apple cider vinegar, plenty of fresh dill, and just a touch of honey.

This cucumber salad only takes about ten minutes to make. You slice, toss everything in a large bowl, mix and serve. Easy.

While the recipe is a cinch to make, there are still a few tips you'll want to keep in mind.

Fresh and vibrant, this easy cucumber salad recipe is a cinch to make. It takes about 10 minutes and only uses a handful of ingredients. The result is a simple summery side dish to partner along with grilled meats and fish at your next barbecue, potluck or picnic.
Prep Time10 mins
Servings: 4 servings
Print Save Recipe Saved!

For the Cucumber Salad

Switch up the herbs. While this version of cucumber salad calls for dill, you can also add whichever herbs you have on hand. Tender, leafy herbs work well for the salad, so choose mint, parsley, tarragon, chives, or a combination of them.

Add chopped fresh tomatoes and plenty of parsley for a Tomato and Cucumber Salad Recipe.

How long does cucumber salad last?

You can keep this cucumber dill salad in an airtight container in the fridge for up to 3 days.

Can you make it in advance?

Yes, the salad keeps well, and you can make it up to 3 days in advance.

What kind of cucumbers should you use for salad?

English and Persian cucumbers work particularly well in this recipe. The pale-skinned, serpentine Armenian cucumber is also a nice option. Avoid pickling cucumbers as their flesh tends to be a little too starchy for this recipe.

How do you cut cucumbers for salad?

For this cucumber dill salad, you'll peel the cucumbers first, and then slice them thinly crosswise into rounds about ⅛ inch thick. A mandoline works perfectly for slicing the cucumbers, but a sharp knife and skilled hand is fine, too.

Do I need to peel cucumbers for salad?

If the skin of your cucumbers tastes bitter, peel them. If the cucumber is sweet all the way through and the skin thin and pleasant to eat, it's fine to keep it on.

Why are some cucumbers bitter?

Some cucumbers have bitter-tasting skin. The bitterness comes from a compound found in cucumbers and similar plants called curcubitacin.

Weather patterns, age at harvest, and other factors can increase the bitterness in cucumbers. Dry growing conditions, nutrient-poor soil, and lack of sun can produce a thick, bitter peel.

For this reason, you might have better luck finding sweet cucumbers from a local, organic grower at your farmer's market than at the grocery store.

Try these simple salads next