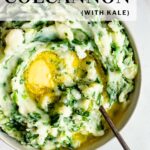 On cool fall nights, when you're hungry for something warm and deeply satisfying, make colcannon. It's easy to make, hearty, and very affordable - requiring only a few simple ingredients.

Jump to Recipe | What is it? | What's in it? | Variations | Common Questions

Colcannon is a traditional Irish dish made with mashed potatoes, kale or cabbage, milk, and butter. Occasionally, other ingredients are added as well such as laver (a type of seaweed), parsnips, green onions, leeks, or onions. It's commonly served with ham, sausages, or bacon.

It's a hearty, deeply satisfying dish that is also affordable. This makes colcannon. a year-round favorite; however, it holds a special place in the traditional foods of Halloween in which a small portion is often reserved for the fairies and placed under a hawthorn tree.

There are three essential ingredients in colcannon: potatoes, greens, and dairy. While potatoes are the foundation of colcannon, greens and dairy products may vary, and some cooks add additional ingredients to theirs.

Rate this Recipe
5 from 3 votes
6 servings

Colcannon is hearty and richly satisfying, a delicious and homey blend of creamy potatoes and kale. Some recipes omit the green onions, but I find they lend a little brightness to the dish. Use a medium-starch potato, such as Yukon Gold, if you can find them.  Russets also work well too.
Prep Time5 mins
Cook Time10 mins
Total Time15 mins
Print Save RecipeSaved! Click to Remove Ads

Try cabbage instead of kale. Steamed or boiled white or savoy cabbage can replace the kale in this recipe.

Add parsnips. Some of the earliest recipes for colcannon include mashed parsnips as well as mashed potatoes.

Skip the green onions and swap in leeks. Leeks sautéed in butter or bacon grease is a particularly nice addition to colcannon.

Add heavy cream instead of milk. Cream adds a delicious richness to colcannon, although whole milk works well, too.

Swap buttermilk for whole milk. Buttermilk has a delicate tartness that provides a bright note to colcannon and is sometimes used in place of whole milk or cream.

Can I make it dairy-free?

If you skip the dairy in colcannon, you lose a bit of its spirit. Butter and milk or cream are central elements of the dish, you could make kale mashed potatoes instead by using broth in place of milk and omitting the butter.

What are the best potatoes to use for colcannon?

What should I serve with colcannon?

Pork sausages, lamb stew, and ham all work well with colcannon. For a meat-free option, try serving a fried egg over it.

Colcannon will keep in the fridge for about 5 days.

How do I reheat it?

To reheat, place the leftovers into a baking dish, top with additional butter or cream, and cover with aluminum foil. Bake at 350 F for about 30 minutes or until the center of the colcannon is warmed through.