Nourished Kitchen » Long-Simmered Broth and Stock » Surprise! Bone broth isn’t rich in minerals, but you should eat plenty of it anyway. 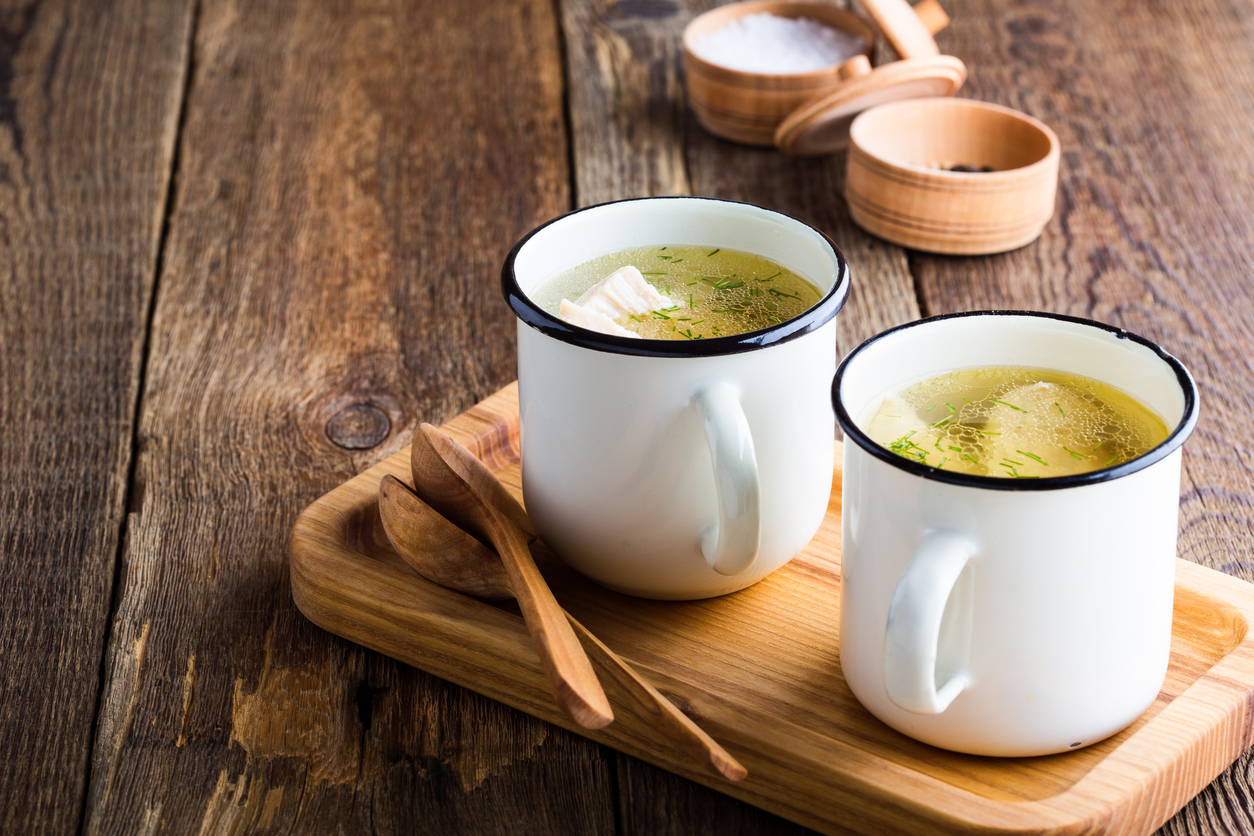 Few traditional foods are as beloved as bone broth.  Slowly simmered, pleasing to all our senses, and renowned for its many benefits. Making stocks and broths is often one of the first skills that those engaging traditional foods reclaim.

Many people think that since it is made with bones, and bones contain lots of minerals, that bone broth would be a good source of calcium and other similar nutrients.  In fact, there are many modern marketing angles aimed directly at touting the mineral and nutrient content of bone broth. Unfortunately, this couldn’t be further from the truth.

Minerals and Nutrients in Bone Broth?

Surprisingly, bone broth is a poor source of minerals and nutrients.  Recent USDA figures found calcium ranges from 9 to 14 mg per cup of broth.  For comparison, a cup of milk contains around 300 mg of calcium, or 30 times more than bone broth.

Lawrence Dubois, from the health food store Salt Springs Natureworks, intrigued by all the claims about bone broth, performed his own independent tests using venison bones.

The results?  The venison broth had around 75 mg per liter or about 18 mg per cup which are some of the highest results seen but still only equivalent to a quarter of a cup of milk. He was so stunned by the results that he retested multiple times using different bones, cooking times, and more. And yet, he was consistently surprised to see such low mineral numbers.

Their findings also point to an important observation about where the minerals in the highest test results originated.

Most minerals in stocks and broths come from vegetables, not bones

One interesting thing that all this testing revealed is just where certain nutrients in broth come from, and it isn’t from the bones. It is from the vegetables.

Many of us remember our waste not, want not grandparents with garages and basements full of old bottles and jars.  Drawers full of this and that, just in case, and leftover vegetable scraps – carrot tops, outer onion layers, celery tips, and the like – on the counter or in the fridge or freezer waiting to be tossed into the next batch of broth or stock.

This traditional approach to broths and stocks, where these collected leftovers from  vegetables were often saved to be tossed into the stewing pot of stock, show great wisdom.  These vegetables not only add flavor and depth to this delicious food but they are one of the primary sources of minerals and other nutrients such as calcium.

In the King’s College study, the stocks that had the highest tested mineral scores had the most vegetable matter.

What does this mean?  When making stock and bone broth, be sure to include your vegetable scraps if you want the most nutritional value for your efforts, or consume broths with added vegetables, as in soup.  Not only does it add important flavor components but it allows you to turn vegetable waste into a nutritional win.  Save your carrot tops and other vegetable scraps for the stock pot.  Once done there, you can then send them on to the compost pile or animal feed.

What are the benefits of bone broth then?

If this traditional food has so little mineral value then why is it so revered? Long-simmered bone broths and stock does have a number of important nutritional and health benefits, it just isn’t in the minerals. The benefits are in the its protein profile and its impact on how our body digests the other parts of our meals.

Modern American diets tend to have an imbalanced amino acid intake. The reliance on muscle meats almost exclusively, instead of engaging in “nose-to-tail” eating of the animals, results in an overabundance of some amino acids and a very little of others.  This imbalance appears to have significant consequences for our health such as fertility and lifespan.

Also, bones in animals and humans are only partially made up of minerals but a large percentage is collagen which is built from proteins.  The two main proteins in collagen are glycine and proline, and a fair amount of glutamic acid which gives the foods made from bones their rich and savory flavor, as explained extensively in the cookbook Broth and Stock.

This is in stark contrast to muscle meat, whose primary amino acid is methionine.  Methionine can deplete your body’s glycine stores, among other problems it can contribute to when consumed in excess. And make no mistake, most modern American diets have an excess of methionine because of the over reliance on animal muscle meats and disregard and dislike for the other parts of the animal.

Thus, bone broth plays a protective, nutritionally balancing role in modern muscle meat rich diets.  It also contains a host of other beneficial compounds such as gelatin, chondroitin, and more that have known health benefits.

Long-simmered bone broths and stocks are not really meant to be a food unto themselves, even though a nice warm mug of broth in the morning is a nice mix up from the usual fare.  Rather, they serve a critical role in cuisine.  They are the base, or foundation, for so many satisfying, easy to digest, and nutrient dense-dishes.  What would chicken soup be without chicken stock?  What would glazed short ribs be without demi-glace?

Traditionally, bone broths and stocks served as a complement for meat and vegetable dishes, on its own as a companion to a dinner of meats, fish, pulses and vegetables, or blended together with these foods in soups and stews.  It’s as part of these dishes that bone broths and stock truly shine, both nutritionally and culinarily, providing deep-rooted flavor and copious amounts of protein, much in the way of gelatin, as a partner to the ample vitamins and minerals provided by other foods.

These latter benefits of stocks are historically and in other cultures well established but are debated by modern American dietary authorities. Regardless, broth has a long history of use in many cultures and the clichéd “Grandma’s Chicken Soup” which always soothed a cold is just one familiar example in a long, rich tradition of genuinely nourishing our families.

How to Make Magnificent Broth

Pair bone broths with plenty of vegetables, and  Broth and Stock is the essential cookbook for making bone broth and stock, plus gorgeous recipes for using broths that you make.  These recipes pair gelatin-rich bone broths with vitamin- and mineral-rich vegetables for wholesome, delicious meals.

Assemble the right tools for making bone broths.  You’ll want a heavy stock pot for simmering your broth, a skimmer for removing the foamy scum that rises to the top of broth as it cooks, and a fine-mesh sieve for straining the broth once it’s done.

If you don’t have time to make bone broth at home, you can purchase traditionally made, slow-simmered bone broth online here. It’s shelf-stable and great to keep on hand for times when you just don’t have broth handy.