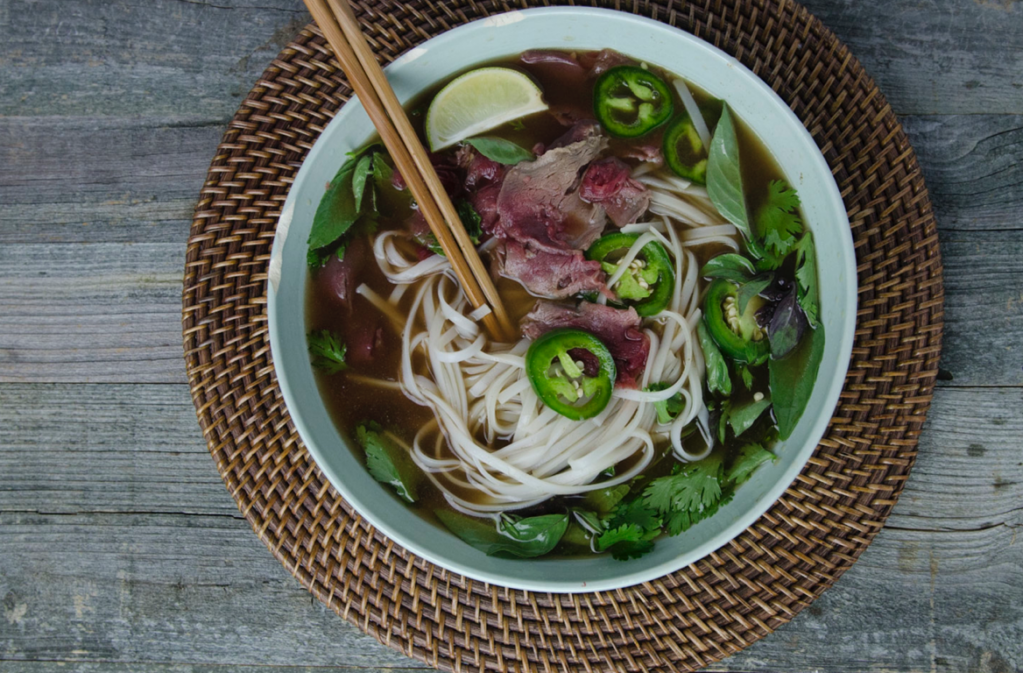 There’s little I like more than settling in for a ginormous bowl of pho, the classic Vietnamese soup of long-simmered broth, rice noodles, thinly sliced meat and fresh herbs. It’s hydrating.  It’s nourishing.  It tastes delicious.  And, like all really good traditional foods, it’s relatively simple to make.

Pho’s Secret is in its broth.

Pho’s broth is richly savory, deliciously silky owing to the large volume of gelatin beef bones give the broth, and wonderfully fragrant with spices like clove, cinnamon and star anise.  Developing these flavor typically takes plenty of time.  You need to simmer bones and spices together over a period of several hours and up to a day, but you can take a short cut and still dole out a gorgeous bowl of pho – only quickly.

The secret is to prepare (or purchase) a gelatin-rich, long-simmered bone broth in advance, and then drop in your spices and simmer them in the hot broth as you prepare your quick pho’s garnishes and other ingredients.  It’s a technique I write about in this book on broth and stock making.

Pho is blessedly easy to make at home, as long you happen to have some beef stock on hand, and it comes together for a nice and quick weeknight meal. While the sweet spices like coriander, fennel, cinnamon and cloves give the beef stock its characteristic flavor as it warms up on your stove, you can prepare pho’s classic accompaniments of hot peppers, fresh herbs, bean sprouts and lime. In the end, it's a super-easy dinner that comes together in about a half hour. This recipe comes from my second cookbook, Broth and Stock, published by Tenspeed Press.
Cook Time30 mins
Total Time30 mins
Servings: 4 servings
Print

Good Broth is Good for You

Long-simmered bone broth is particularly rich in easy-to-absorb protein, and contains traces of minerals, too.  If you’re making your own, use a variety of bones.  Meaty bones, like neck bones and shanks, will give your broth its flavor while jointed bones, like oxtails or knuckle bones, will imbue your broth with gelatin which not only gives you a great source of easy-to-absorb protein, but also good broth’s characteristic silkiness.

You can get recipes (and tips) for making bone broth at home here or, if you don’t have time or interest, you can order it online here. 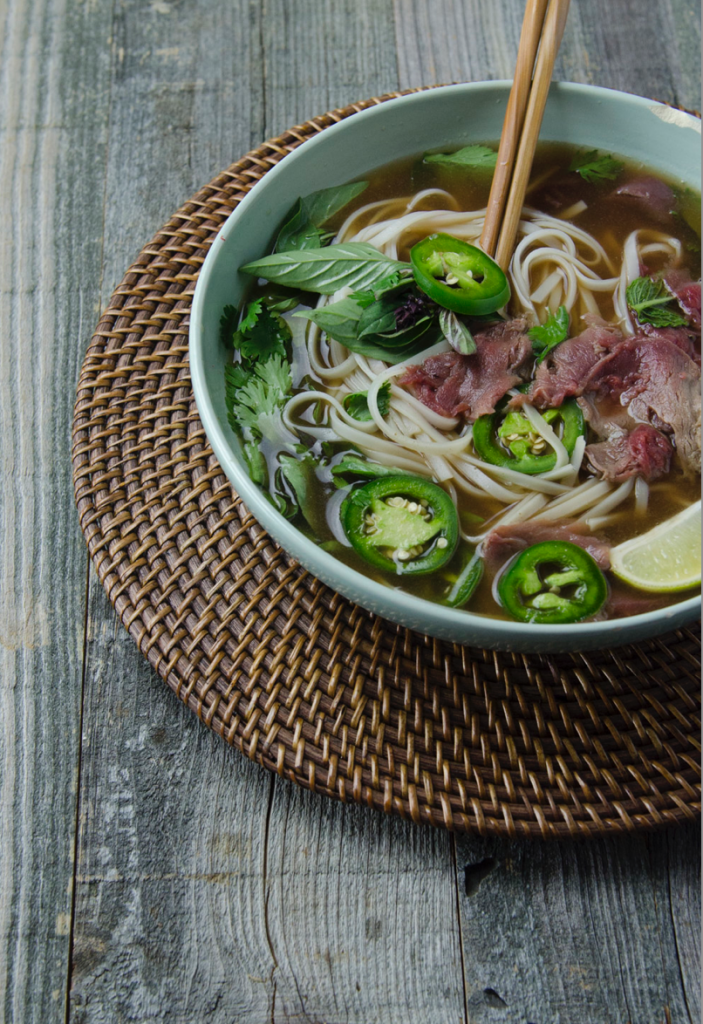 Other Broths and Soups You’ll Love

A staple of traditional cuisines across the world, broths are rich in protein, as well as easy and economical to make.  You can find plenty of broth-making tips and techniques, as well as recipes, in Broth and Stock or check out the plentiful soup recipes here, but I’ve included some of our favorites below.

We recommend making your own broth, but you can also order traditional, long-simmered bone broth online here.

This Thai-Style Chicken Soup is made by simmering fragrant herbs like lemongrass and lime leaf in chicken stock, before dropping in chicken and chiles and swirling it altogether with coconut milk.

Vietnamese Beef Stew is made with flavor-forward spices like star anise and clove, simmered together with inexpensive beef chuck and potatoes.