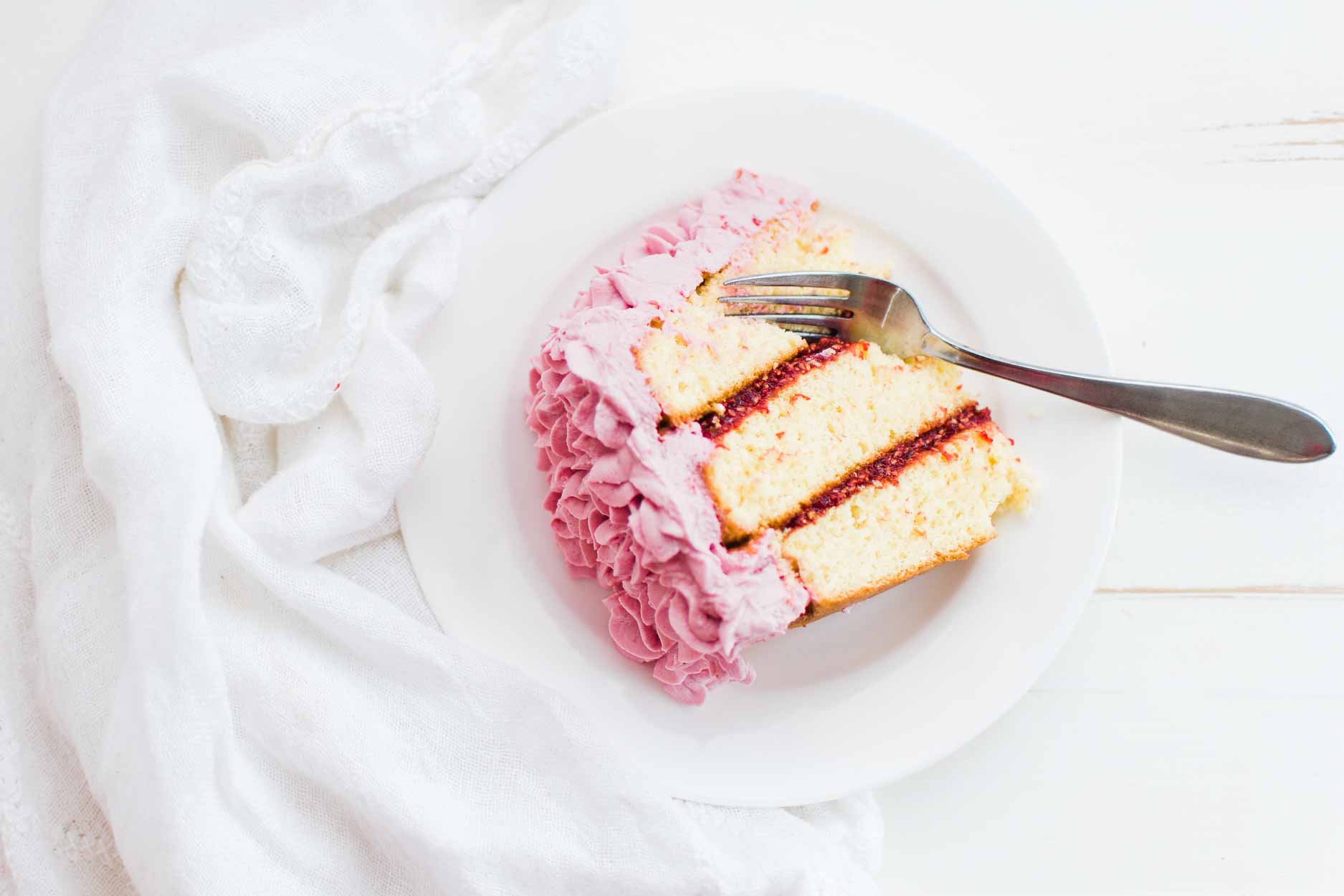 Raspberries, with their vivid color and their beautiful balance of sweetness and tartness jostled with the faintest note of flowers, bring me back to summer time when everything - the sky, the grass, the garden, and the trees - seems joyously and vividly alive.  As this winter inches far too slowly into spring, and the persistently gray, overcast days and impossibly long nights of the Pacific Northwest wear me down, I find myself rattling away in the kitchen on those darkest of mornings doing what I can with pots and a spoon to bring summer back.

With a few vibrant yellow lemons, like little balls of sunshine, and a few bags of frozen raspberries that, when you open them, bring that gorgeous aroma of summer back in one instant whiff, I found a little something that will combat the wettest and grayest of winter days: Lemon Cake with a Raspberry Cream Frosting.  It sounds decadent, and it is, and yet it's not.

It's an ethereally light cake, absent of heavy, sugary sweet-tooth frosting, and, instead, it's enveloped in airy billows of raspberry-infused whipped cream. It's this pale pink frosting that gives the cake its festive and celebratory charm, but without the shortening, without the cups and cups of powdered sugar and without food dye.  Instead, it's simply a pretty cake, not too sweet, which makes it particularly good for a child's birthday party - or - for beating away the winter blues, if you're me. 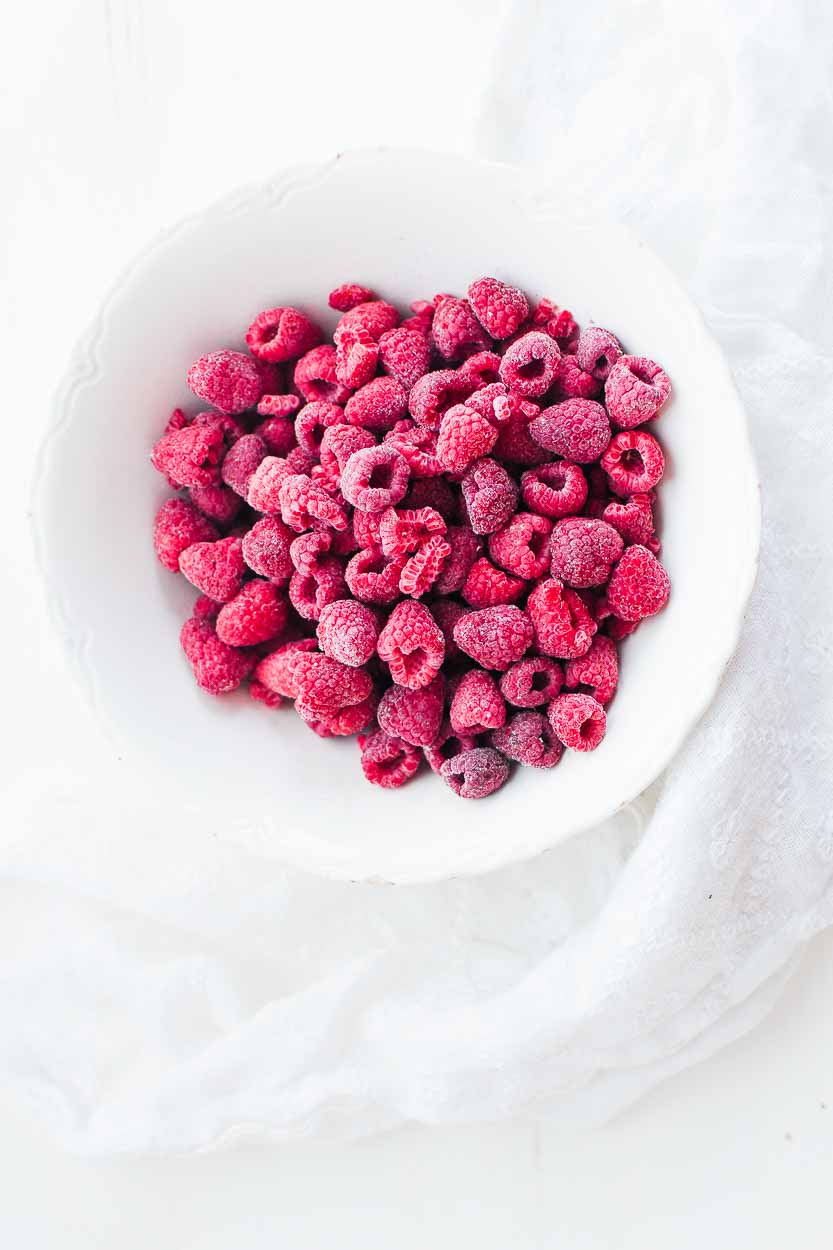 The Goodness of Raspberries

I treasure cooking whole foods from scratch, and, perhaps its the mother in me, but I even want to dessert to have some redeeming quality.  Raspberries do just that: They're potently rich in antioxidants like ellagitannin and anthocyanin which not only support good health, but also give raspberries their vivid red-purple color.  When it comes to whole foods: where there's color and flavor, there's nourishment.

Raspberries are also particularly rich in vitamin C and their seeds are an extraordinarily good source of dietary, fiber too, and, from a a culinary perspective, they can give foods, like the filling for this cake, a nice texture.

How to Get The Frosting Just Right

When making the frosting, it's important to cook down the raspberries until lusciously jammy and thick so that you concentrate their flavor into a small volume.  Then, when you whip them into the cream that forms the bulk of the frosting, it will still whip well enough to hold its shape, infuse the cream with its summery flavor and lovely pink color.

Raspberry blossom honey, if you happen to find it in your local farmers market or natural foods store, is a particularly nice touch in sweetening the frosting as the honey reinforces the flavor of the raspberries, but any honey will do. 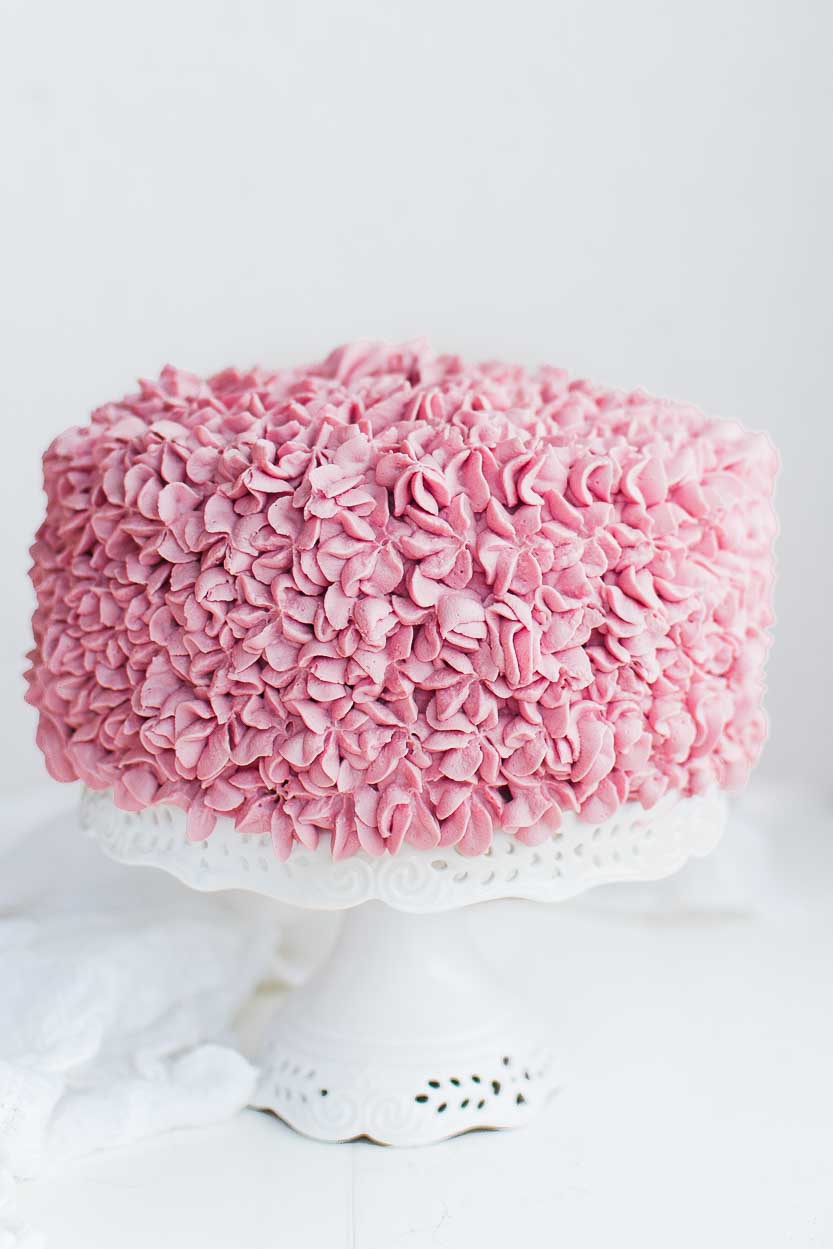 For the Honeyed Raspberry Cream Frosting

To frost the Cake

Change up your flours! You can make this cake using sprouted flour and whole, white wheat pastry flour, too!
Change up your sugar! You can substitute whole, unrefined cane sugar as well as coconut sugar for the granulated sugar in this recipe on a 1:1 ratio; however, your cake's crumb will be darker than the cake shown here.
Tried this recipe?Mention @nourishedkitchen or tag #nourishedkitchen!

Why Frozen Raspberries Work Best in this Frosting

This frosting is very delicate in both sweetness and flavor which is why frozen raspberries work particularly well. Frozen raspberries are flash-frozen at the peak of the harvest season at their most ripe, meaning that the berries offer the most pronounced color, sweetness and flavor - all of which are critical in executing this very delicate and light cream-based frosting. 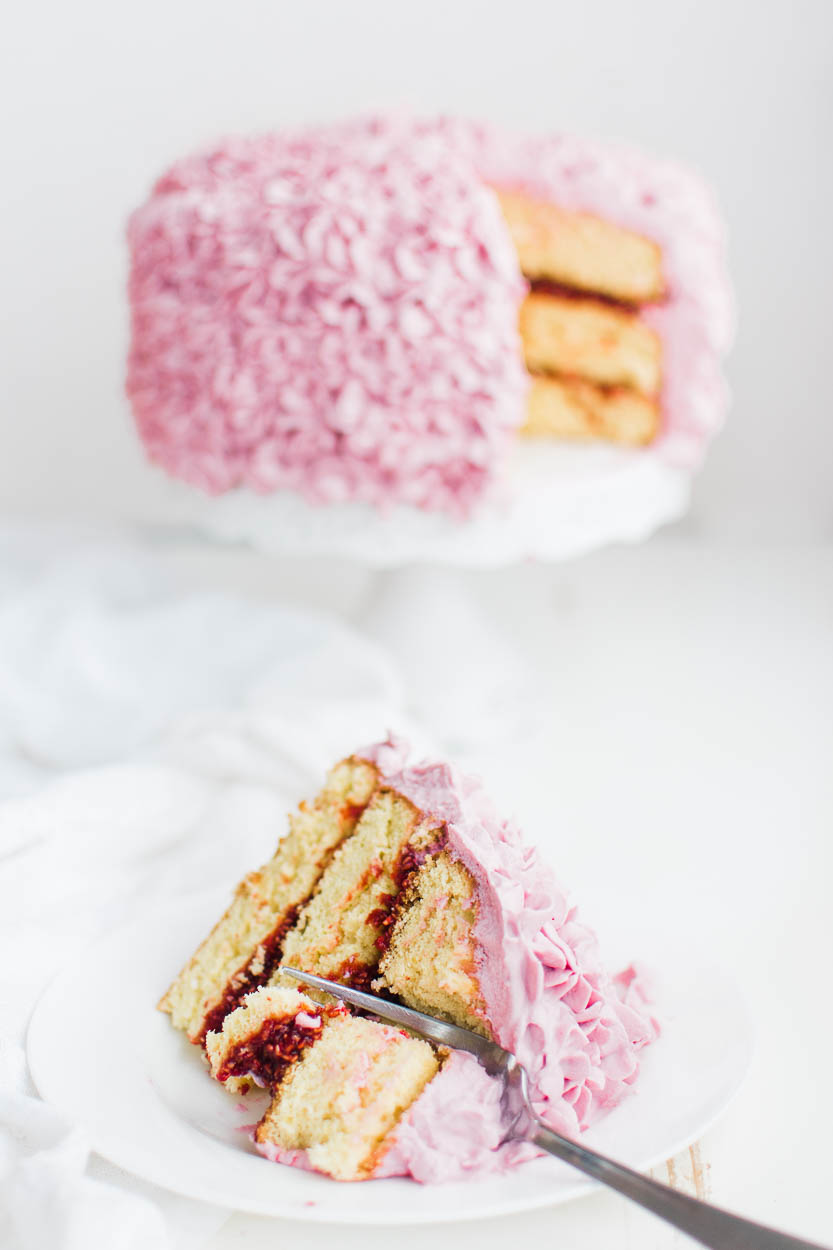 Our Other Favorite Raspberry Recipes

With their sweet-tart flavor, raspberries easily blend with both sweet and savory dishes.  Raspberries are also spectacularly nutrient-rich, and are particularly rich in antioxidants, vitamin C and dietary fiber.  We worked with the National Processed Raspberry Council to develop this recipe. I've included links to some of my favorite frozen raspberry recipes below.

Raspberry Pickled Onions are fun to make, and you can serve them on top of salads, or over burgers.

« Fermentation Basics: When to use a starter, when not to, and why you don't need whey.
Kale and White Bean Soup »