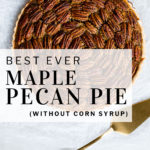 Both maple and pecans are quintessential American flavors. And when you combine them, the results are pure magic. Maple's sweet woodsy notes complement the rich buttery flavor of pecans. And in this easy Maple Pecan Pie they're spiked with the lightest touch of bourbon and nestled together in a flaky, buttery crust.

Along with Slow-Roasted Turkey, Maple-Glazed Vegetables, and Pumpkin Custard, this pie always makes it to our Thanksgiving table.

Why make a pecan pie without corn syrup?

Most pecan pie recipes call for a blend of corn syrup and white sugar, which yields a sticky sweet filling that coats chopped pecans. But, you can make a pecan pie without corn syrup fairly easily, and often with a better, deeper flavor.

A blend of both maple sugar and maple syrup work well to replace the white sugar and corn syrup you find in most recipes for pecan pie. Not only does maple work well to give the pie its classic, sticky filling, but it also gives the pie a richer flavor. Complexly sweet with subtle notes of caramel and toffee.

And for cooks looking to avoid corn syrup, maple makes a solid choice.

A good homemade pie crust depends on quality ingredients, minimal handling, and cold temperatures. Unbleached all-purpose flour works well because it's easy to work with, strong enough to roll out easily, and hold its shape. It also has a mild, neutral flavor which works well as a complement to the more pronounced and robust flavors you'll find in the maple pecan filling.

And one of the easiest ways to make the crust is to pulse the flour together with very cold butter, salt, and a bit of ice water in your food processor until it just comes together. And then you form it into a disc, and roll it out. Working with a food processor speeds up your time, and keeps your ingredients colder than working by hand.

Pecan pie filling is very sweet and custard-like in texture. Eggs provide structure, while a blend of maple syrup and maple sugar provide sweetness and flavor. Blending them with a touch of butter gives richness, while salt provides balance.

You first begin by arranging the pecans in the crust, which allows you to make decorative patterns. Then you pour the filling over the pecans. They'll float a bit in the maple filling. But as the pie bakes and sets, they'll rise to the surface and the pie will solidify so that you can slice it easily.

And you'll know your pie is done baking by watching the filling. It will puff in the oven when it's ready, but settle as it cools.

Rate this Recipe
5 from 3 votes
8 servings

Once you get the hang of making this Maple Pecan Pie, you can make a handful of adjustments to really pull in other flavors and make it distinctly your own.

Swap the bourbon for vanilla. Vanilla complements both maple and pecans. So if you don't have bourbon handy, swirl in a teaspoon or two of vanilla extract.

Swap sorghum syrup for maple syrup for a nice alternative.

Substitute cold lard for all or part of the butter in the crust. Lard makes a tender, delicate pie crust with a great flavor.

Add cinnamon and orange zest to the filling, for a boost of flavor