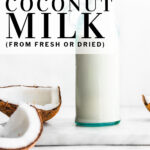 Homemade coconut milk tastes fresh and delicate with a rich component thanks to the plentiful natural oils it contains, and more delicious than any canned variety you can buy at the store. It's also easy to make with a little time and patience.

Coconut milk is the creamy, opaque liquid that you extract after blending coconut meat with a small amount of water. It is sweet, mild in flavor, and deliciously rich.

You can use it as an alternative to dairy if you're sensitive to compounds such as lactose or casein, and it also has a long tradition of use in Asian and South Pacific cookery.

How is it made?

Coconut milk is fairly easy to make at home, and the process for both commercial and homemade versions begins the same. You start by separating the coconut flesh from the husk, grating or blending it into small chunks with water, next you'll squeeze and strain the meat and water mixture to extract the milk.

Homemade coconut milk needs only two ingredients: coconut and water. And while the process is simple, you'll need some special pieces of kitchen equipment in order to make it such as a high-speed blender.

Rate this Recipe
5 from 2 votes
1 quart

Homemade coconut milk is rich, sweet, and delicious. It has a subtle coconut flavor, and tastes fresher than canned. While you can make coconut milk from dried coconut meat, using a fresh brown coconut results is worth the effort - resulting in richer flavor.
Prep Time10 mins
Total Time10 mins
Print Save RecipeSaved! Click to Remove Ads

Use dried coconut by blending 2 cups dried, unsweetened coconut with 3 cups hot water. Next, follow the steps for straining listed above.

Add dates for sweetness. While homemade fresh coconut milk is naturally sweet, you may wish to sweeten it further by adding 2 to 3 pitted dates to the coconut meat in the blender. Then, strain as you normally would.

Add spices such as vanilla, cardamom, or cacao. If you'd prefer to give a little lift and flavor to your coconut milk, you can blend vanilla bean, cardamom, cacao, or other herbs in with the coconut, straining as you normally would.

Give these coconut recipes a try next: