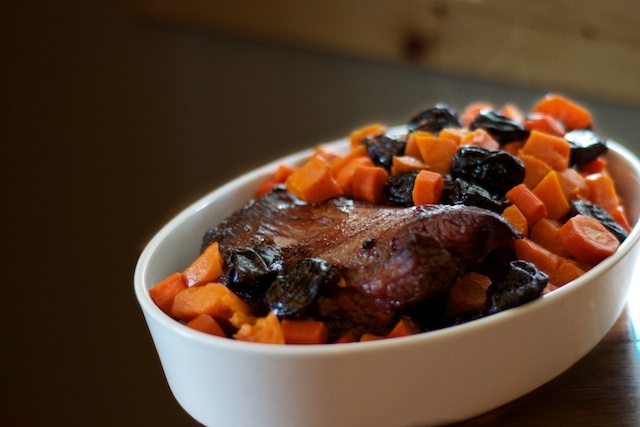 Braised brisket with tzimmes, a classic dish for Rosh Hashanah, takes a new direction with the addition of hard apple cider.  Slowly cooked and tenderly watched, grass-fed beef brisket is first seared in tallow then doused in homemade beef stock and hard cider and roasted in a clay baker or Dutch oven for several hours.  Sweet potato, carrot and prunes – a traditional combination of fruits and vegetables for the Ashkenazic dish called tzimmes – are added several hours after the meat has begun to roast so that they retain their texture without overcooking.  Later, pan juices combine with even more cider for a mildly sweet and decidedly smooth reduction sauce. Sweet dishes, for a sweet  year, are typically celebrated during Rosh Hashanah with both apples and honey featuring prominently in traditional menus while the naturally sweet tzimmes is a beautiful accompaniment.

Beef seems to get a bad rap and while conventionally raised, grain-fed beef is certainly deserving of its ill reputation, grass-fed beef offers quite a different story.  Grass-fed beef is rich in micronutrients – particularly B vitamins and trace minerals.  Just a 100-gram portion contains over half the RDA for zinc, a mineral that is critical for immune function and reproductive health; moreover, brisket is also a good source of niacin and vitamins B6 and B12.   Similarly, beef tallow – though much loathed by conventional dietary dogma – is a potently rich source of conjugated linoleic acid, a naturally occurring fatty acid with strongly anti-carcinogenic and antioxidant properties.  This beneficial fat decreases significantly with the introduction of grain into cattle’s diet, meaning that grass-fed beef offers the most potent source while grain-fed, conventionally raised beef offers only minimal amounts – underscoring the importance of purchasing beef from farms and ranches following the sustainable model of holistic management in which cattle are rotationally grazed on rapidly growing green grasses, ensuring their meat and fat is of the highest nutritional quality.

While this grass-fed beef brisket, slowly simmered with tzimmes certainly derives much of its flavor from the use of a good quality grass-fed beef tallow, that flavor is further complemented by the sweetness of of carrots, prunes and sweet potatoes.  Vegetables, like meat, are also good sources of micronutrients, including carotenoids and minerals like manganese.  Evidence indicates that the vitamins and antioxidants found in these foods are better absorbed when eaten with fat = making the combination of grass-fed beef and tallow with the tzimmes even more valuable. 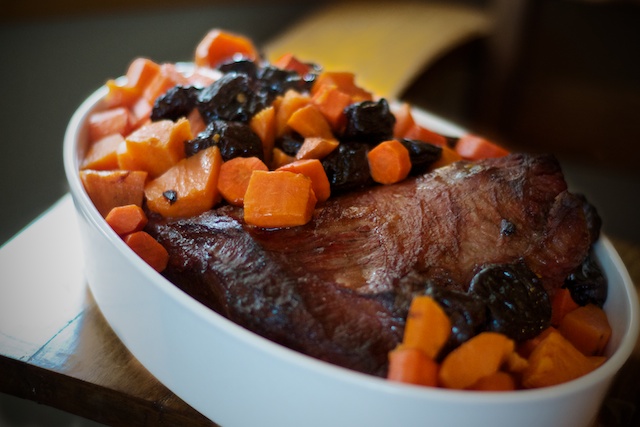 A special occasion meal, grass-fed beef brisket is slowly roasted in stock and hard cider before sweet potato, prunes and carrots are added to the mix. Once the meat is done and allowed to rest, pan juices combine with more hard cider and a reduced down to a fine, silky sauce.
Prep Time20 mins
Cook Time5 hrs
Total Time5 hrs 20 mins
Print Save Recipe Saved!

for the reduction sauce:

Tried this recipe?Mention @nourishedkitchen or tag #nourishedkitchen!
« Tomato and Cucumber Salad
raising real food kids: 10 tips for dining out with your child »