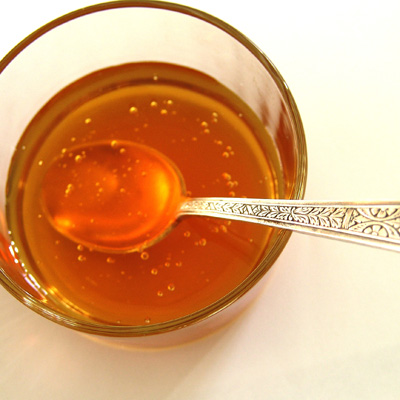 Last week, you should have rid your cupboards of white sugar, brown sugar, agave nectar, high fructose corn syrup and chemically-based artificial sweeteners.   This week, examine this list and head to the store to pick up the ones that appeal to you.   Next week, we’ll talk about their place in the kitchen.

Honey: Honey has been collected for human consumption for at least 10,000 years, and humans have kept bees since ancient Egypt though the modern method of beekeeping is only a few hundred years old.   Honey’s primary sugars are comprised of fructose (levulose) and glucose.   Additionally, it contains a variety of antioxidants, enzymes and trace amounts of vitamins like thiamin and niacin.

Be mindful in your choice of honey.   Choose a raw, unfiltered honey like   Really Raw Honey.     Many honeys available at your supermarket have been altered through modern processing so that they do not contain the goodies found in the natural, raw honey that our ancestors consumed.   Honey can be processed by centrifuging, heating and filtering–this modern processing kills what is an essentially living food thereby depriving you of its nutrients and leaving you with only its sweetness.

By contrast, Really Raw Honey and other completely unprocessed honeys still contain pollen, propolis, enzymes, antioxidants and micronutrients which help to at least off-set the effects all sugars have on the metabolism.   Beyond that, unprocessed honey has a unique and almost perfumed flavor that is missing from its processed counterparts.   Flavor and nutrients: they almost always go together.

Honey is sweeter than white sugar, so use only three-quarters the amount of sugar called for.   Honey, due to its moisture content, is best in dishes where moisture content doesn’t matter like sauces or beverages.

Date Sugar: Date sugar is made by drying dates and pulverizing them to a granular powder.   Dates can contain up to 60% sugars and that percentage is increased with drying as the water evaporates from the fruit.   For this reason, date sugar makes a very simple, whole and   natural sweetener.

When using date sugar, take care not to use the sugar in dishes that require dissolving sugar in a liquid.   Date sugar does not dissolve well.   Instead, use it in baked goods.   Date sugar tends to be sweeter than white or brown sugars, substituting half the amount of date sugar would yield the appropriate sweetness to the dish.

Unrefined or Low-refined Cane Sugars (Rapadura, Turbinado, Piloncillo, Sucanat): Cane sugar, according to some anthropologists, is one of the oldest domesticated plants.   Minimally processed, unrefined and low-refined cane sugars like rapadura, sucanat, turbinado and piloncillo temper their sweetness with micronutrients like B vitamins and trace minerals.

These sugars, with the exception of turbinado which we’ll address later, are traditionally processed.   First the juice is extracted from the sugar cane by pressing, then that juice is heated to reduce it to a thick syrup.   Hand-paddling the syrup cools it and allows the sugars to crystallize.   Since the molasses naturally present in the sugar isn’t extracted, the final product can be rich in minerals by comparison to its modern counterpart: white sugar. Turbinado sugar is processed similarly, only it undergoes a steaming or washing that causes it to lose some of its molasses.

These traditionally processed sugars can replace white and brown sugar at a 1:1 ratio.   They contain many minerals including iron, calcium, chromium and potassium.

Molasses: Molasses is a byproduct of processing cane juice into white sugar and, in that regard, I’m not entirely sure it belongs here.   Nevertheless, it provides a good source of niacin, thiamin, magnesium, copper and potassium.   Its flavor is bittersweet and deeply rich.   For that reason it should be used in small quantities so as not to impart to strong of a flavor to the end dish.

Sorghum Syrup: Sorhum hails from Africa and it was brought to the Americas with the slave trade.   Like maple syrup which is harvested and made in the early spring, sorghum syrup is seasonally prepared.   Autumn marks the sorghum harvest season.   The process begins by harvesting the sorghum canes which are then stripped of their leaves and milled so as to extract the sweet juice.   The juice is then heated and reduced to a thick, golden-copper syrup that is nicely sweet with a unique, subtle flavor reminiscent of tropical fruit.

Sorghum syrup is an good source of manganese, vitamin B6, riboflavin, magnesium and potassium.   You can use it any recipe that calls for a liquid sweetener.   Prior to corn syrup’s rise in popularity, sorghum syrup sweetened that classic confection of the American South: pecan pie.

Maple Syrup & Maple Sugar: Native Americans were the first to tap the maple trees native to what is now the north-east United States.   They, in turn, taught the technique to European colonists.   The technique of processing the sap of the maple trees into useable maple syrup and maple sugar has not changed since its inception and making maple syrup is still largely a cottage industry today much as it was several hundred years ago for the colonists.

First, the maple tree is tapped and its sap runs from the injury to its trunk into waiting buckets.   That sap is then cooked down to reduce its water content and increase its sugar content until it becomes a fine, sweet syrup.   The syrup can be cooked down further until so much of the water evaporates that the sugars crystallize making maple sugar.

Maple syrup and sugar are excellent sources of zinc and manganese and also provide trace amounts of   calcium, iron and magnesium.   Maple sugar can be used at a 1:1 ratio for white or brown sugar, but it is very costly.

Coconut & Palm Sugar: Popular in southeast Asia, coconut and palm sugar are yet another natural sweetener known in earlier times.   Originally extracted only from the palmyra palm tree, it is now made from sago and coconut palms as well.   As with other sweeteners, the juice is extracted and then boiled down until it forms the desired consistency:   a syrup, thick gooey paste or sugar crystals.

Coconut and palm sugars can be used in confections, but they’re also used to balance strong flavors in curries, sauces and other dishes.   You can use it at a 1:1 ratio for white sugar.

Stevia: Stevia is native to South America where it was used by indiginous peoples in tea and as a contraceptive.   Steviosides and rebaudiosides are the natural compounds in stevia that lend it a sweet taste (many hundred times sweeter than sugar) but without the calories.   As a non-caloric sweetener, it presents and excellent alternative to chemically manufactured artificial sweeteners like sucralose and others.

Take care to purchase only the green stevia which is the least processed form available on the market.   Green stevia is simply the stevia herb, dried and powdered.   White stevia and liquid stevia are a result of processing which concentrates the steviosides and rebaudiosides and it is a new, modern process.   Native peoples didn’t sweeten their teas with liquid stevia, so be wary.   Further, it was traditionally used as a contraceptive–a medical use that some studies back up and others do not.   So women who are trying to conceive should be aware of this factor prior to using it.

If you choose to use stevia, use green stevia which is an excellent accompaniment to tea and herbal tisanes.   Other culinary uses for unprocessed, green stevia can prove challenging.

These represent the most easily accessible natural and traditional sweeteners, so head to your health food store and try a few out.   You might be surprised at how easy they are to use in cooking.   A word of warning, though: all sweeteners – even natural and traditional sweeteners – should be eaten in limited quantities and only on rare occasions.   They are strong foods, rich in simple carbohydrates and that can prove challenging for almost everyone’s metabolism.

We’ll expand upon the discussion of natural sweeteners next week when we discuss when and how to use natural sweeteners.   Hopefully, this guide will make your transition into wholesome, traditional foods just a touch easier.