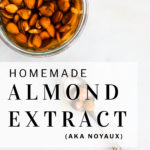 With its intoxicating sweet aroma, noyaux acts as an easy homemade almond extract. It has a deep, resonant fragrance, and just the tiniest bit of this homemade liqueur can flavor and entire dish.

Jump to Noyaux Recipe | What is it? | How to Make It | Safety

Noyaux is the name for both the bits of stone fruit and the aromatic liqueur made from them. This liqueur has the sweet, intoxicating aroma that you'll also find in bitter almonds and almond extract. Because of its deep almond-like aroma, it makes an excellent homemade almond extract.

Noyaux is also traditionally made in France where cooks use it to flavor ice creams, custards and other desserts. It has an old-fashioned charm, like homemade herbal root beer or real brandied cherries.

How to Make Noyaux

Apricot stones cling furiously to their kernels. And extracting them takes patience, skill and strength.

If you clean the stones well, and let them dry until they turn brittle, you'll have an easier time extracting the kernels. I like to tuck the cleaned stones into a food dehydrator to dry them quicker.

Pounding them with a hammer until the tough stone cracks to reveal the soft, aromatic kernel works well.

Soaking the Kernels in Alcohol

Next, you'll want to soak the kernels in alcohol to make noyaux. Soaking over a period of several months allows enough time for you to extract all the aroma and flavor from the kernels.

Noyaux is made in country kitchens throughout France. Moreover, cooks use the pits of stonefruits not only in extracts, but also in pastries and as seasonings.

But there's something else you should consider: Apricot kernels, noyaux and the pits of stone fruit contain plant poisons.

Apricot kernels, apple seeds and cherry pits all contain small amounts of amygdalin, which is a precursor to cyanide. As a result, homemade noyaux will also contain amygdalin

But, as Paracelsus wrote, "The dose makes the poison."

And in the case of a homemade almond extract like this one, the dose is invariably tiny when you consider that you may use ¼ to ½ teaspoon to flavor an entire dish.

There's also a concept in toxicology called hormesis - that is a very, very small dose of something that is toxic in larger amount may actually convey a beneficial effect (1). To that end, the use of apricot kernels has been popularized as an alternative cancer treatment, but there's really no evidence that supports its use (2, 3, 4).

Since stone fruit pits and extracts made from are enjoyed in minute quantities throughout Europe and the Middle East, I'm inclined to use tiny amounts in my own kitchen.

Authorities estimate that eating up to 2 apricot kernels daily is safe (5). Assuming all of the amygdalin in this noyaux recipe . Each teaspoon of homemade almond extract would contain the equivalent of about ⅓ of an apricot kernel. Considering that's further spread out over an entire recipe which may feed six or more.

So where does that leave us in terms of safety? Use small amounts only, and keep it away from children (as well as anyone else who might mistakenly drink it). Or simply appreciate it as a novel recipe.

With an intoxicating aroma that's at once delicate and heady, noyaux is an easy almond extract that you can make at home.
Prep Time5 mins
Soaking90 d
Total Time90 d 5 mins
Print Save RecipeSaved! Click to Remove Ads