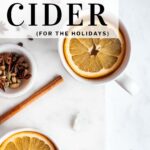 Spiked with citrus and fragrant with cinnamon, allspice, and cloves, this mulled cider recipe is a cinch to make and always a favorite winter drink. It's also a flexible recipe, and you can make this version on your stove or even in your slow cooker or Instant Pot.

Hot mulled cider is unsweetened, unfiltered apple juice that's infused with spices and served during the cold months. It's similar to wassail, to which it's related; however, unlike wassail, mulled apple cider is typically nonalcoholic.

In this version, I also include sliced oranges which lend sweetness and help amplify the cider's tart top notes as well as cardamom which blends beautifully with apple.

What are mulling spices?

Mulling spices are fragrant spices added to hot wintertime drinks such as wassail, cider, and mulled wine. They usually include cinnamon, allspice, cloves, and nutmeg, but the mix can also include peppercorns, coriander, anise, cardamom, and similar spices. These spices generally have a warming energy and support good digestion.

Instead of using ground spices, I recommend using them whole (if you can find them) as whole spices tend to be richer in volatile oils than the ground spices you find in the grocery store. That means bigger flavor.

Allspice has a mellow spice that encompasses other similar flavors - as though it's a blend of nutmeg, cinnamon, and cloves.

Cloves are the dried buds of an evergreen tree, and they have a potent, sweet, and spicy flavor. A little goes a long way.

Star anise is rich in antiviral compounds and helps support both digestion and the immune system. It has a floral note coupled with an anise-like sweetness.

Cardamom tastes vaguely of citrus, mint, and fennel. Like other spices you use for mulled cider, it supports good digestion.

It takes minimal effort to make mulled cider, and the results are vibrantly delicious - sweet, tart, and steeped with deep and resonant spice. It's also a recipe that has a fair amount of room for both error and variation. But, there are a few things to keep in mind to make sure it comes out every time.

Sweet, tart, and infused with warming spices, this mulled apple cider recipe is a cinch to make whether you try it on the stove, slow cooker, or Instant Pot.
Servings: 8 servings
Print Save Recipe Saved!

In a slow cooker or Crock Pot.

In the Instant Pot.

Add alcohol. If you prefer a boozy version, try wassail. Or substitute a mix of hard cider and brandy for the soft cider called for in this recipe.

Using packaged mulling spices. You can find packets of mulling spices in most grocery stores, herb shops, and natural grocers in the fall and winter. So, if you don't care to keep a full spice rack, you can always use a packet instead. Look for packages that contain whole spices for best flavor.

Adjust the mulling spices based on what you have in your pantry. If you have coriander, but not cardamom, use that. If you don't care for cloves, but like nutmeg, use nutmeg instead.

Try these other winter drinks next: