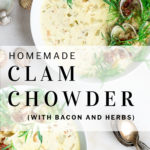 Enriched with bacon and cream and enlivened by fresh herbs, this clam chowder recipe is easy to make with either fresh clams or canned.

Jump to Recipe | What is it? | Types of Chowder | Serving Suggestions

We live near the seashore. And when the tide is low, and the water cold, we gather our boots, buckets, and shovels and head to the beach. It's there, buried in the tidal flats' gritty sand that we find fresh clams. Plump and perfect for chowder. While we typically make this chowder with fresh clams, you can always use canned if they're easier to find.

A good chowder is delicate, flavored with onions and bacon, and dotted with sweet clams and tender potatoes. I favor the simple, humble style of a good Maine Clam Chowder. Flecks of bacon, fragrant bites of celery, onion, and clams all swimming in a delicate, thin broth with just the right touch of cream.

When the chowder's finished, swirl some fresh chopped herbs into the pot. Dill and tarragon partner beautifully with seafood.

Chowder is typically a thick and rich seafood soup that contains onions, potatoes, cream, and herbs. Some chowders, like this salmon chowder, contain fish, others will contain shellfish and others will feature a variety of seafood. Clam chowder? It features clams.

As with other traditional foods, you'll find several varieties. While they'll all feature similar ingredients, like clams and potatoes, you'll find distinct regional variations, too. Regional culture, climate, culinary heritage, and access to ingredients will influence how recipes come together, develop and evolve over time.

What are the different types of clam chowder?

When you think of clam chowder, you probably think of New England Style chowder - white, creamy, thick like gravy, and studded with clams and potatoes. But, there are a lot more varieties to consider.

All have clams, most have salt pork or bacon, as well as onions, celery, and potato. From there, some varieties include dairy, others tomato, and others yet have a fine, clear clam broth.

Is clam chowder good for you?

Clams are a particularly nutrient-dense food and are a good source of B vitamins and various minerals. They're particularly rich in iron, vitamin B12, and selenium, which is a powerful antioxidant that supports detoxification and thyroid health.

Potatoes, onions, celery, and various culinary herbs will also give chowder more nourishment in the way of dietary fiber and various antioxidants and phytonutrients. Using grass-fed cream in your chowder will also give it a boost of healthy fats, like conjugated linoleic acid, and fat-soluble vitamins.

How to Make Clam Chowder

If you're cooking with fresh clams, you'll need to steam them first. Give them a knock on the counter, and if they stay open toss them. Then put them in your kettle with water, and steam them until they open. Throw out any that stay closed. Then reserve the broth and chop the clam meat.

To make your chowder, you'll start by rendering bacon so that it crisps. Bacon pairs well with clams and gives the broth a nice, subtle smokiness.

To the bacon, you'll add your aromatic vegetables: onion and celery. Instead of sautéing them, allow them to sweat in a covered soup pot with a dash of sea salt. They'll release their flavor and fragrance, without caramelizing.

Next, add your potatoes, chopped clams, and broth. Simmer them together until the potatoes are fall-apart tender.

Lastly, swirl fresh cream into the pot to give the chowder its characteristic creaminess. Toss in the fresh herbs, and serve.

Rate this Recipe
6 to 8 servings

Bacon, cream and herbs make beautiful companions for clams in this Maine-style clam chowder with its simple broth and lovely, light flavor.  Fresh clams give this chowder the best flavor, but if you don't live by the seashore or can't find them in your local market, you can always substitute canned clams and it'll come out just fine.Serve this chowder right away with plenty of chopped fresh herbs and crusty loaf of buttered sourdough bread.  If you have leftovers, you can store them in the fridge up to two days, taking care to reheat the chowder gently and slowly over a low temperature.
Prep Time15 mins
Cook Time30 mins
Print Save RecipeSaved! Click to Remove Ads

Don't have fresh clams? You can use canned clams. Just substitute 3 (6.5 oz) cans clams with their juice.
Rate this recipe!If you loved this recipe, give it a rating. Let us know what works, what didn't and whether you made any adjustments that can help other cooks.

Where to Find Fresh Clams

Cultured clams are a sustainable seafood, and you can buy them in many grocery stores, natural foods stores, and supermarkets. You can also use canned clams to make this chowder (see recipe note).

How to Purge Fresh Clams

Clams suck the grit, sand, and mud that surrounds them into their bellies. And that makes for gritty clams. Almost all clams you purchase at the store will already be clean and purged. But, if you've gone clamming at low tide and want to make chowder with your catch, you'll need to purge them first.

When you go clamming, make sure to bring a bucket of clean seawater home with you. Strain the seawater and submerge the clams in the water for at least an hour and up to a day so that they release their grit. If you don't have seawater, you can store them in saltwater. You can read more about the specifics of purging clams here.

What to Serve with Your Chowder

You'll want to serve something starchy with a Maine Clam Chowder. Its thin, delicate broth works well with homemade crackers or sourdough rye.

Rich foods, like chowder, also benefit from lighter accompaniments. So, you might add a light spring salad dressed with a simple maple vinaigrette. Sliced ripe tomatoes dressed with celery seed, black pepper, and sea salt also make a nice side. And you can always finish the meal with a fresh fruit salad or a strawberry mint sorbet to cleanse your palate.

Try these sustainable seafood recipes next