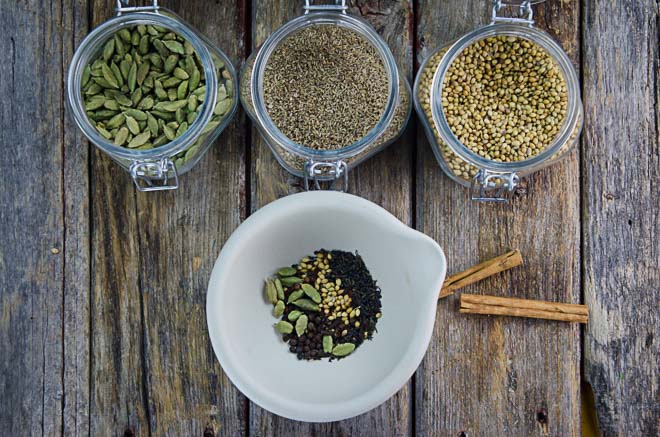 I’ve never been one for breakfast.  My stomach doesn’t really wake up until mid-morning.  Sure, I try to take the time to make a hot breakfast for my little boy before he heads off to school, whether that’s fried eggs and fresh tomatoes, or homemade oatmeal.  For the most part, I sip something first thing in the morning: jasmine tea, bone broth sprinkled with salt and garlic, and lately, I’ve enjoyed spiced butter tea – rich and milky and spiked with warming notes of black pepper, cloves, cinnamon, cardamom and ginger.

Later, especially on the weekends, I might make something special for brunch: oat and berry cobbler, sourdough pancakes.  But, for the most part, first thing in the morning I want something very light, but also very nourishing: and that’s when I landed on spiced butter tea which reminds me of a homemade chai latté, only fortified by good fats and protein.

The History of Butter Tea

Traditional butter tea usually begins by simmering compressed pu-erh tea, a dark fermented tea with a smoky mushroomy bloom of flavor, in water for several hours.  This concentrated tea is then strained.  Then, tea makers draw off just what they need and churn it with yak butter and, occasionally, yak milk as well as sea salt.  This forms a strong, milky, frothy bitter tea which was the inspiration for the monumentally popular Bullet Proof Coffee that’s trending right now.

Butter tea is a traditional food from Tibet where the caloric and micronutrient value of yak butter provided much-need sustenance against rugged terrain, bitter cold weather and a lifestyle marked by the physical hardship of mountain living.  Natives to the area would drink cups and cups of the bitter, milky tea throughout the day for sustenance.

How I Make Butter Tea

For my part, I take inspiration from tradition and then adjust it, ever so slightly, with the inclusion of additional ingredients: spices for flavor and warmth; grass-fed ghee, MCT oil and milk instead of yak butter, collagen for a boost of protein, and jaggery for a touch of sweetness.  In the end, mine resembles a chai latté, though slightly more bitter and definitively less sweet.

As someone who has always struggled to eat (much less enjoy) breakfast first thing in the morning, I tend to rely more heavily on bone broth sprinkled with salt and garlic in the morning, or this spiced butter tea – particularly during the cold months of winter.  I make the strong tea first, storing it in the fridge and only taking out a cup or two when I need it.  And, then, I finish the tea: adding in the ghee, salt, milk and jaggery.  I churn it with a milk frother (like this) until it turns wonderfully frothy.

Where many other teas like oolong and black tea achieve their color and flavor through differing levels of oxidation, pu-erh achieves its through both oxidation and true fermentation, making it relatively unique.  Legend holds that pu-erh was discovered, and the fermentation process of the tea mastered, by accident – much like cheddar cheese or bog butter – in that tea was cached by travelers, and it aged inits hiding spot before rediscovery.  Eventually, people began to age tea specifically for its dark, complex flavor with vague notes of smoke and mushrooms.

Pu-erh has always been one of my favorite teas to brew.  I like its depth, and its richness.  I typically by my pu-erh tea here where I buy my herbs and spices, but you can also find it in specialty shops and natural grocers.

I love the heady aroma of sweet spices found in classic chai masala: ginger, black pepper, clove, cardamom, fennel.  For me they’re at once stimulating and comforting.  Particularly during the depth of winter, the warming notes of spices like cinnamon, clove, black pepper and ginger can brighten otherwise cold and dark mornings.

I use a fair number of spices in my kitchen, not only for spiced butter tea, but also for dishes like curried lentil soup or sweets like apple pies or election cake, so I buy organic and fair trade spices in bulk here.  When they arrive, a pour them into glass jars and tuck them into the cupboard, either using them whole or grinding them fresh in a my spice grinder before I toss them into a pot.

Instead, I add Coffee++ from Pure Indian Foods  which combines grass-fed ghee with MCT oil (derived from coconut), in the vein of Bullet-proof Coffee as recommended by Dave Asprey.  Now, I don’t go in for the claims that this magical elixir will help me to lose weight, or increase my brain power or stamina (such promises!), but I do like that it provides a concentrated source of good fats and calories to start the day

Grass-fed butter (and ghee and cream and milk) is particularly rich in conjugated linoleic acid, a healthy fat that you can read more about here. It is also a rich source of true vitamin A as well as vitamin K2, which plays a role in bone, heart and reproductive health.

Recently, and this is far from traditional, I’ve stirred a scoop of collagen peptides into my morning butter tea as a way to boost its nutrition by providing me with a bit of protein in the morning.  I’m rarely one to eat breakfast, favoring, instead, tea or broth first thing in the morning at around 7 and then a very light brunch around 10 AM.

I’ve been using collagen peptides and gelatin from grass-fed beef cows (find it here).  Collagen and gelatin are pretty heavily processed and are straight protein, so while buying gelatin made from grass-fed beef over regular gelatin won’t convey any distinct nutritional benefits, it does support a system based on animal welfare.  That is valuable to me.

Sea salt is a traditional addition to Tibetan butter tea, and jaggery is not.  Both unrefined sea salt (I buy this kind) and jaggery (find it here), a type of unrefined cane sugar, contain trace minerals.  Jaggery, as an unrefined sugar, offers a sweetness tempered by bitter and dark notes from its residual molasses.  For that reason, the jaggery stands up well to the dark pu-erh tea and the simmered spices. 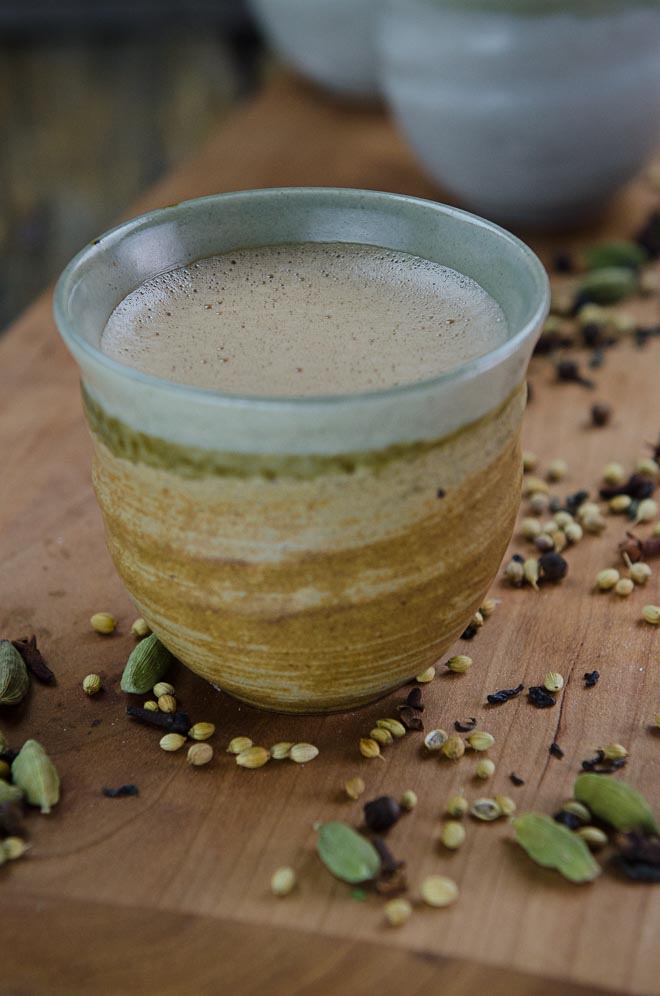 Faintly sweet and bitter, this spiced butter tea combines the rich warmth of cardamom, ginger, fennel, black pepper, anise and other spices with ghee, milk, jaggery for a warming, creamy morning tea. The addition of collagen or gelatin provides a boost of protein. You can buy the pu-erh tea and organic spices called for through our affiliate partnership with Mountain Rose Herbs, or at your local natural foods store or spice shop.
Print Save Recipe Saved!

For the Spiced Tea

For Each Cup of Tea

Previous Post: « The Skinny on Gelatin
Next Post: Why Grass-fed Dairy Matters (and a visit to three English farms) »