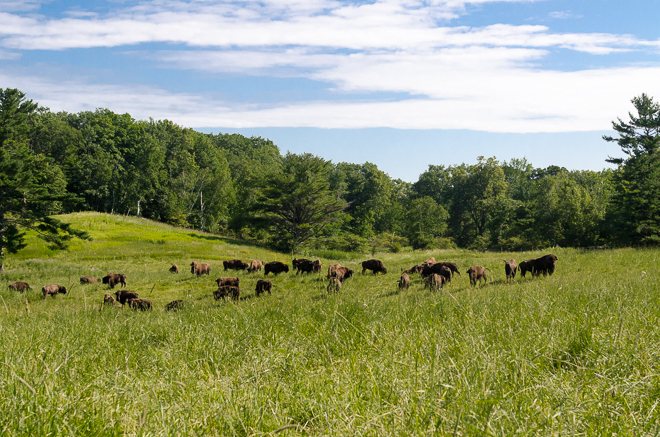 By the time I arrived at the Minneapolis-St. Paul airport it was nearly dark. The National Bison Association asked me if I wanted to visit one of its member ranches, and of course I said yes. They sent along a ticket, I hopped on a plane and here I was on the curb keeping a lookout for Mary Graese from NorthStar Bison who would pick me up and show me around.

We wove our way through miles of countryside from Minnesota into northwest Wisconsin where Mary and her family have kept their ranch since the 1980s. We arrived at her century-old farmhouse, she ladled a mug of bison bone broth that had simmered for three days on the stove, sprinkled with salt, and we chatted.

At dawn, I left with Marielle, Mary’s daughter, to visit the cows and calves in the pasture. Dew had settled on the grasses and flowers in the pasture, and it smelled of honey, all sweet and floral and delicate. In the many years I’ve spent touring farms around the world, the aroma and odor of the farm is what I often notice first.

There’s a quiet gentleness to the way bison graze and move, but that gentleness belies their truly fierce, wild nature. Powerful animals, bison run at great speeds and can turn on a dime, despite their big and hulking frames. 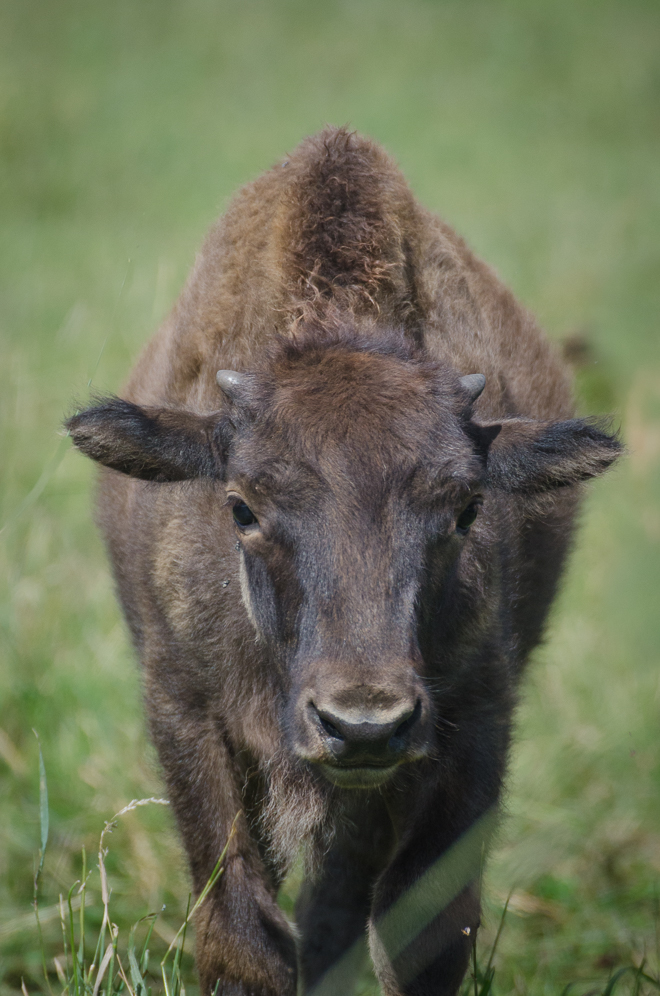 Health Begins on the Pasture

American Bison still maintain an inherent wildness, with each herd led by a powerful, muscled bull or, in his absence, by a matriarch who keeps the cows in line. They move together, drifting along the wide green pastures of the ranch as a group. They mow down long grasses, and pack it as they move. When one pasture is spent and thatched, the ranchers move them to a fresh paddock, allowing time for the pasture to renew itself before rotating them through once more.  This system of intensive, planned grazing mimics the natural patterns of game animals like bison

As she drives me across a verdant pasture that’s dotted with wildflowers and red clover, Mary says to me that she’s thankful, and that it’s by grace, she’s been privileged enough to act in stewardship of these animals and the land they graze.

She doesn’t consider herself a rancher so much as a grass farmer, a sentiment echoed by many of the people who raise free-range livestock that I happen to meet. 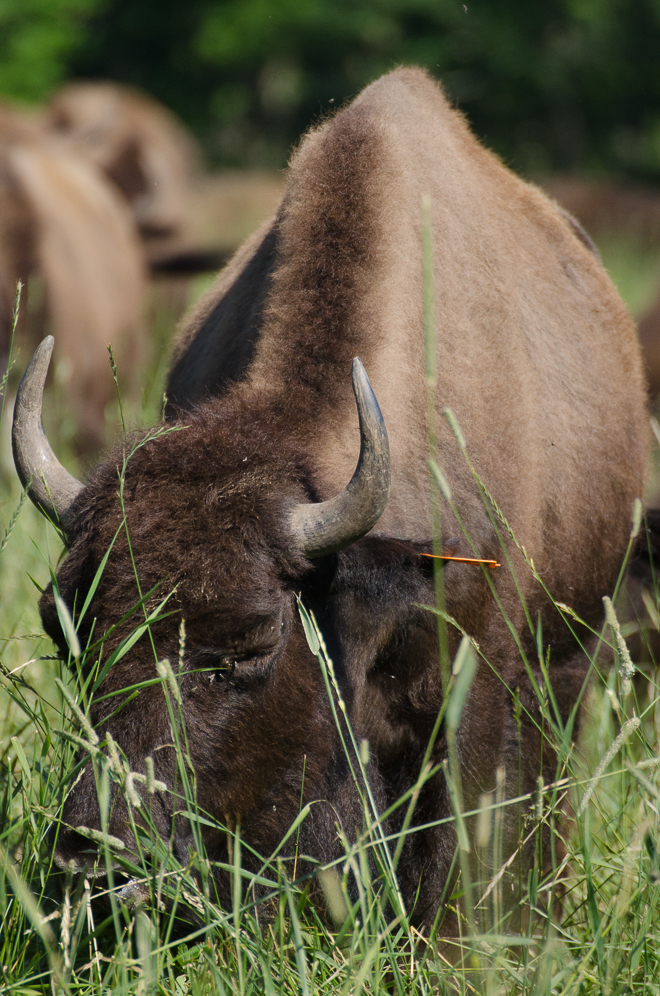 The Graese’s manage their ranch holistically, following the lead of pioneers like Allan Savory whose work on planned holistic management of livestock and pasture has delivered remarkable promise for the renewal of the world’s grasslands, the sequestration of carbon in the soil, and the reversal of desertification (watch an in-depth and inspiring explanation of his work here).

Moreover, the way planned holistic management builds the soil and the grass, helps to act in a way that minimizes rainwater runoff and helps to provide security during times of drought. The Savory Institute is hosting an annual conference in October in San Francisco, where you can learn more about how and why holistic management works. As an aside, I’ll be speaking on how farmers and ranchers can harness the power of social media to tell their story and market direct-to-consumer. (Check out the conference here).

Holistic management techniques create biodiverse, resilient grasslands, and this, in its turn, creates grasslands that support an increasing variety of flora and fauna.  A testament to this was the widely diverse plant life on NorthStar Bison's pasture, including milkweed which helps to nourish Monarch butterflies. 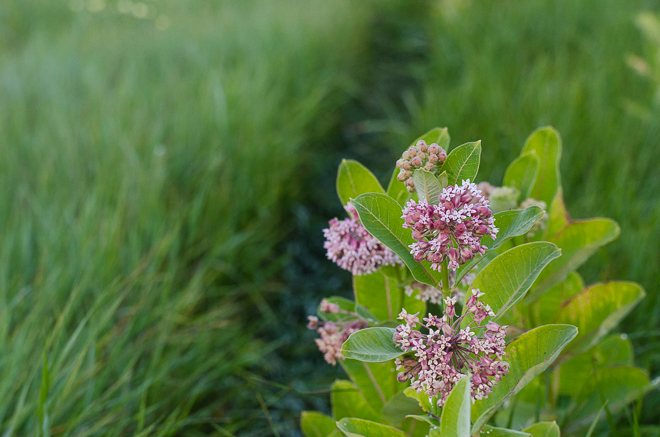 Only a fraction, anywhere from 5-7% of bison is grass-fed and grass-finished, the rest, like beef cattle, begin their lives on the range and are transferred to feedlots where they're finished on grain for the remaining four or five months.  As with cattle, the shift from grass to grain changes the composition of the meat's fatty acid content.  The fat of bison and beef finished on grass is higher in omega-3s, beta carotene and conjugated linoleic acid than that of those finished on grain, in feedlots.

The issue, rests largely with processors many of whom require bison be finished on grain.  Finishing them on grain creates a uniformity of product that wholesalers and restaurateurs tend to prefer. Few processing facilities and few ways to market directly to consumers can be a limiting factor for ranchers who might otherwise raise and finish their animals on grass.

The Graese's, by contrast, own their own processing facility so the animals can be finished on grass, and their meat processed and cut to order on site.  The issue of processing is one of the biggest hurdles new ranchers face, and it's not just limited to bison ranchers either.

No Growth Hormones, No Sub-Therapeutic Antibiotics

Bison, grass-fed or grain-finished, is a cleaner meat.  Federal law disallows the use of growth hormones in bison, and the National Bison Association's members have agreed to a code of ethics that disallows the subtherapeutic use of antibiotics in their animals.  Moreover, bison are raised and bred in a way that respects their wild nature.  Artificial insemination, a technique common in cattle, is not used in bison.  You can read their full code of ethics here. 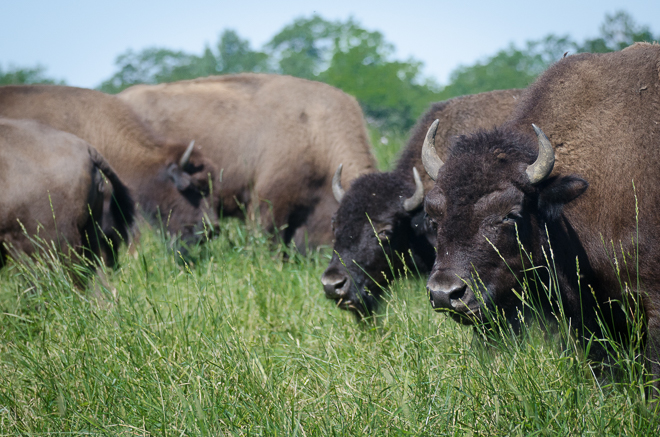 American bison ranching is a story of near loss, and then renewal through care and stewardship.

Brought nearly to extinction in the latter part of the 19th century due to overhunting, the bison population was brought back in no small part by dedicated ranchers who had fallen in love with them. This dogged pursuit of preservation is born of both love and respect for the species, and is not dissimilar to the way dedicated farmers and ranchers across the world work to preserve heritage breeds of cattle, pigs, sheep, goats and other animals.

It's this thoughtfulness, conservation and stewardship that has woven its way into the ethos of American bison ranchers, and it's ultimately that story of renewal upon the brink of extinction that gives me hope for the American agriculture in the future.

Where to Find Bison

There's over 1,100 members of the National Bison Association today.  You can follow them online here.

You can also order bison from the Graeses' holistically managed pastures online at NorthStar Bison and at the Honest Bison. 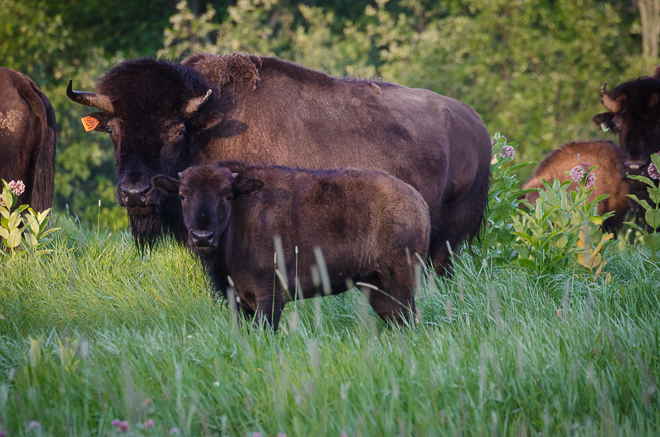