A military brat, I spent the bulk of my grade school years on Okinawa and, thanks to an adventurous mother, we explored the island, its culture and, of course, its foods instead of sheltering ourselves within the isolated confines of the air base.   While the adventurousness of my mother's enthusiasm for unusual foods (I'd like to see her duke it out with Andrew Zimmern) can leave even me queasy, she taught me good lessons - namely a respect for indigenous food culture that persists to this day and is reinforced by nonprofit organizations like the Weston A Price Foundation and the Price Pottenger Nutritional Foundation.

My mother would not settle for the standard American foods shipped in across a hemisphere of ocean to the military commissaries.   Yes, we ate our fair share of spaghetti and drank plenty of   Crystal Light, but she preferred the freshness and striking variety of Okinawa's markets. She'd drag my sister and I out on sunny days to the markets and I'd examine the fresh fish - their eyes still glistening and moist from the ocean and their mouth's gaping open as if to say, "Don't eat me and I'll grant you a wish."

I fell in love with food in Okinawa.   I remember the savory and unctuous octopus stir fry at one restaurant and the sesame spinach at another.   Still yet, I remember having lunch at a tiny restaurant on a coral cliff overlooking the ocean and being surprised to find a very, very small and very, very live crab in the bottom of my tepid soup.     Never mind the yakitori stands that filled the air just outside Gate 2 street with billows of teriyaki-scented smoke.   I loved Okinawa - and I loved its foods. 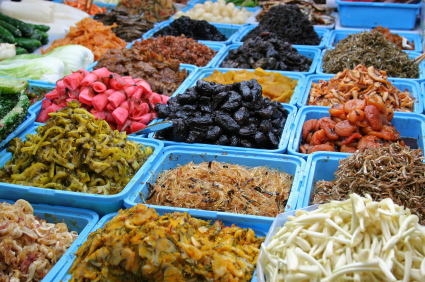 The traditional foods of Okinawa are misunderstood.   After researchers on aging pegged Okinawa as a hot spot of long life, writers examined the lifestyle and eating habits of Okinawan centenarians in effort to track down some elixir or combination of factors contributing to their long lives.   And, as is wont to happen, instead of examining the traditional foods of Okinawa in their own right; they, instead, evaluated them with a decidedly western eye - omitting certain factors, ignoring others and neglecting the context in which still others appear - as if they needed to make the traditional, life-giving foods of Okinawa fit with the diets encouraged by the United States government and the nutritional powers that be.

Traditional foods of Okinawa are extremely varied, remarkably nutrient-dense as are all traditional foods and strictly moderated with the philosophy of hara hachi bu.   While the diet of Okinawa is, indeed, plant-based it is most certainly not "low fat" as has been posited by some writer-researchers about the native foods of Okinawa.   Indeed, all those stirfries of bittermelon and fresh vegetables found in Okinawan bowls are fried in lard and seasoned with sesame oil.     I remember fondly that a slab of salt pork graced every bowl of udon I slurped up while living on the island.   Pig fat is not, as you can imagine, a low-fat food yet the Okinawans are fond of it. Much of the fat consumed is pastured as pigs are commonly raised at home in the gardens of Okinawan homes.   Pork and lard, like avocado and olive oil, are a remarkably good source of monounsaturated fatty acid and, if that pig roots around on sunny days, it is also a remarkably source of vitamin D.

The diet of Okinawa also includes considerably more animal products and meat - usually in the form of pork - than that of the mainland Japanese or even the Chinese.   Goat and chicken play a lesser, but still important, role in Okinawan cuisine. Okinawans average about 100 grams or one modest portion of meat per person per day.     Animal foods are important on Okinawa and, like all food, play a role in the population's general health, well-being and longevity.

Fish plays an important role in the cooking of Okinawa as well. Seafoods eaten are various and numerous - with Okinawans averaging about 200 grams of fish per day.   Octopus, minnows, skipjack, mahi, crab and even sea urchin are enjoyed liberally.   I recall walking the reefs at low-tide to watch the old mamasans in their sunbonnets squatting over the rocky coral as they scooped up spiny sea urchins, bashed them against reef and scooped out the bright orange goo of inside the urchins.   With mixture of disgust and fascination, I couldn't tear my eyes away from the discarded urchins - their black spines still wiggling despite their lack of insides.

Sea urchin or uni, is a very potent source of fat soluble vitamins including vitamins A and E and it is also a good source of phosphorus, vitamin B12, folate, riboflavin and even vitamin C.   Uni, like many of Okinawa's foods, is extremely nutrient-dense.   It is also remarkably fatty with over half of its calories coming from fat - particularly omega-3 fatty acids.

Okinawans use vegetables abundantly and liberally - with vegetables comprising the greatest volume in the native diet.   Burdock, carrots, sprouts, wild greens and medicinal herbs are staples.   Loofah and the strongly flavored bittermelon are frequently eaten as well.   Vegetables make it to every meal - sometimes steamed and often stirfried in lard and seasoned with sesame oil.   Bittermelon or goya is an acquired taste, to put it lightly.   It is extremely bitter and remember, where there's flavor, there's nutrients.   Bittermelon is rich in vitamin C.   Bittermelon shows promise in the treatment of   type II diabetes as it increases insulin sensitivity.

Iodine-rich sea vegetables such as kombu play an important role in the traditional cuisine of Okinawa.   Many types of seaweed are harvested and eaten liberally.   Sea vegetables, like fish and shellfish, are nutrient-dense - providing a rich source of trace minerals like calcium, magnesium and iron as well as vitamin K and folate.

Traditional Okinawan cooking also makes use of starches in moderate portions.   Millet, rice and the purple-fleshed sweet potato   comprise the bulk of the starches though some buckwheat-based soba and wheat-based udon are also used.   Until the decades following World War II, polished white rice was not widely available and Okinawa's inhabitants, instead, relied on whole brown rice often combined with millet as well as the purple-fleshed sweet potato which is - I can say from personal experience - oh so good.   Really good.   It's important to note that grain and starches, apart from times of famine when sweet potato was the only food widely available, were only eaten in small to moderate portions.

Soy, Sugar, Tea and Other Accompaniments to Okinawan Cuisine

Soy enthusiasts often point to Asia and Okinawa, specifically, to illustrate perceived benefits of the humble soybean. The Okinawans, like most Asians, have included soy foods into their diet; however, soy's role in the cuisine of Okinawa is more limited than you might initially think.   Indeed while soy foods are enjoyed almost daily, they are neither used in large portions nor used as a primary source of nutrients; rather, they're used as condiments.   And, like all condiments, they're included as an accompaniment to other foods.   Moreoever, in Okinawa, the type of soy eaten is most often fermented.   Shoyu, natto and miso are featured.   The exception to this rule is tofu which may still, from time to time, be fermented prior to eating and is usually consumed in stir fries.

Soy tends to be goitrogenic, that is: it slows down thyroid function.   In Okinawa, you'll note that soy is consumed in limited portions and as an accompaniment to a diet that is otherwise rich in iodine from seafood and sea vegetables.   This natural combination may very well reduce soy's goitrogenic effects.

Sweets are enjoyed in Okinawa, though, traditionally speaking, only sugar cane and candies made of unrefined lump sugar were eaten.   Visiting a living heritage farm on the island, I recall how the cane was cut, milled in its traditional method which released its juices.   Those juices were then boiled down to create sugar.   The sugar cane was not refined, bleached or other wise processed and its natural minerals were left intact along with its rich molasses-like flavor.   This sugar was often used to season pork and chicken as in classic teriyaki sauces as well as used as a candy.   Similarly, youths all over the island enjoyed fresh cut cane.   Though used as a seasoning agent for meat and an occasional candy, it was left unrefined and its use was limited.

Green teas and even kelp tea are traditionally enjoyed throughout the day and at meal times.   These teas are rich in cancer-fighting polyphenols.   Awamori, a distilled liquor similar to sake, is also traditionally consumed in Okinawa and most often combined with ice and water.

Okinawa's wholesome foods are traditionally eaten wisely and modestly.   The philosophy of hara hachi bu, or eating until you're 80% full, accompanies meal time as Okinawans deliberately moderate their portion sizes and hunger.   Indeed, hara hachi bu is often whispered like a prayer or grace prior to commencing a meal.   The concept of restricting one's intake of food is not isolated to the Okinawans.   Indeed, Weston A Price who studied traditional diets across the globe in the 1930s, found that most if not all traditional societies practiced some form of self-restriction whether it was eating only until 80% full or periodic fasting surrounding rituals.

In the end, we could all benefit from hara hachi bu - reminding ourselves not to over eat and to be thankful for the nutrient-rich foods that grace our plates.