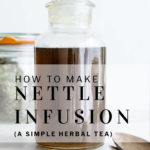 Stinging nettle infusions are highly nutritive tonics that nourish your body with trace minerals and vitamin K as well as many antioxidants and other plant compounds. They also help support cardiovascular health, blood sugar regulation and general wellness. Herbalists often use them as an adrenal and reproductive tonic and to ease seasonal allergies. They're also easy to make at home, and have a pleasantly mild flavor.

Jump to Recipe | What is it? | Infusion vs. Tea | Benefits | Dosage

What is nettle infusion?

A stinging nettle infusion is an herbal tonic that you make by steeping dried nettles in hot water for several hours. After steeping, you strain the liquid and drink it. Nettle infusions tend to be a good source of many micronutrients, like vitamins and minerals, as well as various medicinal plant compounds.

Stinging nettle infusion is potent medicine, particularly for women whose bodies crave the plant’s rich minerals like chromium, magnesium and calcium (1).  And nettles are highly anti-inflammatory and rich in phytonutrients like rutin, which is also found in buckwheat. and astragalin which you can also find in the adaptogenic herb astragalus (2).

Traditionally, herbalists use nettle infusions to support general wellness, to ease growing pains in children and as a reproductive tonic for both men and women(3). Many herbalists also use nettle as an adrenal tonic, too.

Other benefits of nettle infusions:

Where to find stinging nettles: Stinging nettles grow wild throughout Europe and North America. You can also grow them yourself from seed. Or you can purchase organic nettle online here.

While teas and infusions may seem indistinct, there's a few key differences. Herbal teas use smaller amounts of herbs and they steep for a shorter period of time - about 5 minutes. By contrast, herbal infusions use a higher volume of herbs and often steep for several hours. Therefore, they're more nutrient-dense (9).

So when making a nettle infusion, you'll use about one ounce of herbs for every quart of water and steep it at least 4 and up to 12 hours. As a result, nettle infusions have a deeper flavor and a much higher micronutrient content than nettle teas.

How much should you drink?

Nettle infusions are, ultimately, nutritive foods. While they have many benefits, it's wise to drink the amount that feels right to you. Even as little as a cup of nettle infusion every few days still conveys many nutritive benefits.

Some sources recommends up to two liters a day(10), which is an awful lot to swallow. But a cup or two is likely sufficient and a little easier to manage.

Notes: Nettle infusions, like most foods and drinks, taste best when you make them fresh.  However, you can make this infusion, strain out the nettles, and store the drink in the fridge about 4 days.
Rate this recipe!If you loved this recipe, give it a rating. Let us know what works, what didn't and whether you made any adjustments that can help other cooks.