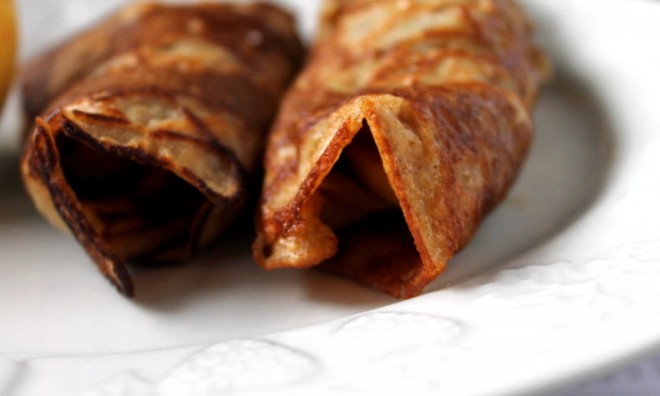 As summer slowly fades to autumn, we are found in one of the busiest times of the year here on our off-grid homestead. Central Texas provides us with a fall gardening season and so many days this time of year you can find us planting kale seedlings, direct-seeding carrots and beets, picking dried beans, and preparing firewood for winter.

It’s also a time of year when I return to sourdough baking. The summer heat fading to the background, we can all breathe again and I am able to tend to things like kefir, kraut, and sourdough with regularity.

One of the great tragedies of sourdough baking, in my opinion, is allowing “discarded” starter to go to waste. I find it useful in feeding a husband who spent his day wielding a shovel, three children whose bellies are always in need of filling, and a nursing Mama who nourishes and needs to be nourished. 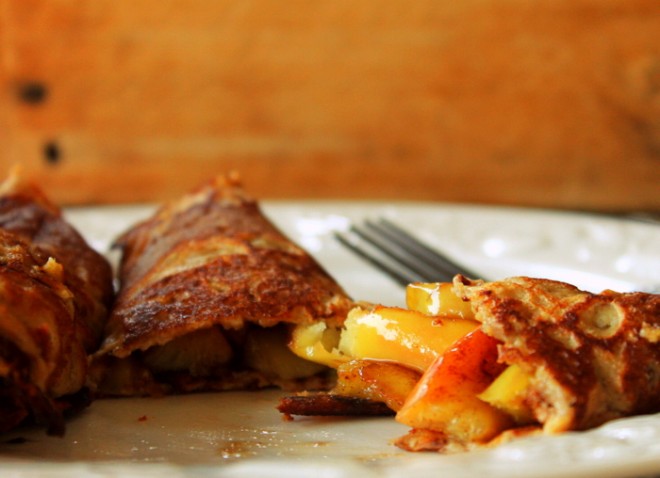 And so I put my discarded starter to work, most often in the form of sourdough pancakes, but sometimes as crackers, fritters, and these crepes. Because it requires no additional flour, the grains are fully fermented and don’t weigh us down after a meal, when we need that energy for keeping up with the chickens or the children.

Another tragedy of sourdough baking, again, in my opinion, is the under utilizatsorghum molassesion of rye. There is nothing light and airy about 100% rye breads, but even those who are turned off by a dense loaf can utilize rye in things like crepes, pancakes, and snack breads.

I love the deep and vast history of the usage of this grain, the nutty flavor and nutritional density it lends, and the relative ease it puts on the pocket book and digestive systems of those unable to eat wheat.

A perfect compliment to the rye and apples is sorghum molasses, a sweetener that comes not from sugar cane as we are familiar with, but a variety of "sweet sorghum" which is cousin to grain sorghum. It is made by cooking the juice from the stalk of the Sorghum plant into a sweet, thick syrup. Somewhere in flavor between molasses and honey, it contains nutrients such as iron, calcium, and potassium.

And combined with butter and apples, it makes a caramel apple-like filling for these delicious and simple crepes.

Where to Find Sorghum Molasses

Sorghum molasses can be found all across the southern United States, as well as in many health food stores.  You can also find Amish-made sorghum molasses here. 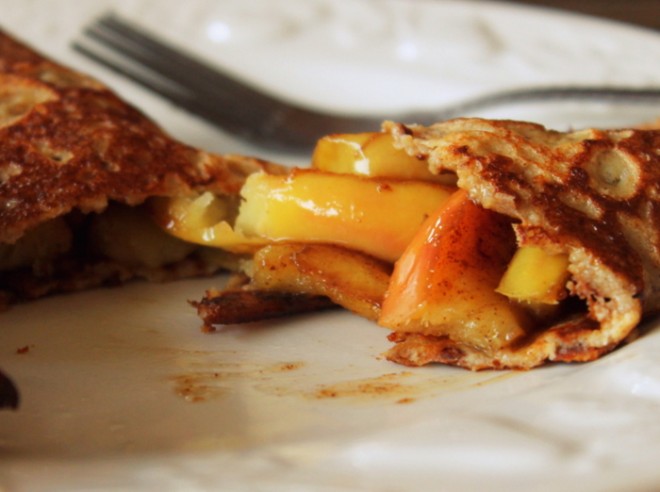 Tangy sourdough rye crepes filled with fall apples and lightly sweetened with sorghum molasses makes a comforting fall dessert or breakfast. As breakfast I like to serve it alongside bacon or eggs and cinnamon-spiked milk kefir, as I would rye sourdough pancakes.
Print Save Recipe Saved!

Tried this recipe?Mention @nourishedkitchen or tag #nourishedkitchen!
Shannon is a home cook, fermentation enthusiast, homesteader, and sustainable food advocate. She has written two seasonal cookbooks, writes the real food and sustainability blog Nourishing Days, and works as Blog Editor and Content Writer for Cultures for Health. She lives on an off-grid homestead with her husband and four young children.
« Glowing Ghost Gummies
Why My Family Takes Cod Liver Oil Everyday »