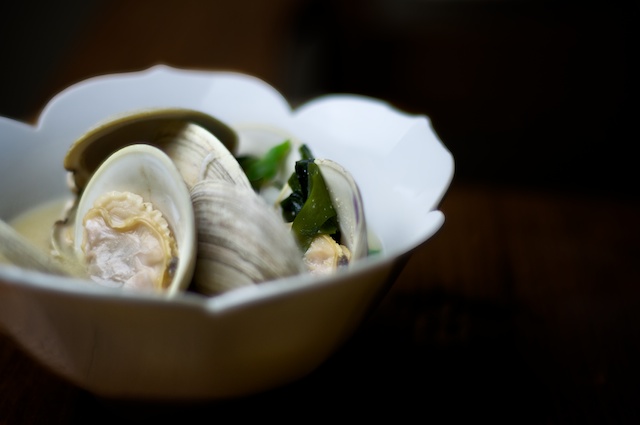 Miso Soup with Clams is one of those special foods – simple and quiet and humble, but also elegant in its simplicity.   Sometimes the best dishes are the simplest.  In our home, broths and stocks form the foundation of many of our meals, and with good reason.  Broths and stocks are potently rich sources of trace minerals and, when made from bones and other nutritive animal foods that are too often relegated to the refuse pile in modern kitchens, can also be rich in glucosamine chondroitin, glycine, collagen and other nutrients that are otherwise difficult to come by.  Indeed, a good broth offers many benefits.  In the summertime, when the days are long and hot and standing over a boiling stockpot seems otherwise unappealing, we make the effort to eat broth daily or every other day, but in winter when drifts of snow can climb as high as second story windows, we make the effort to drink broth with every meal whether in soup or stew, as a liquid for braising vegetables, in reduction sauces and gravies or even on its own.  So this miso soup with clams, simple ingredients dressed in a fine Japanese-style fish and seaweed broth, is yet another simple incarnation of the many ways we love to enjoy and celebrate the nutritive value of a good broth. (You can always skip to the recipe.  It’s a good one.)

Miso soup with clams, just as any good Japanese soup does, begins with dashi – a fine and clear broth made from bonito and kombu.  Bonito is a member of the tuna family, skipjack tuna in particular, and it is gently smoked and fully dried.  Its flavor, thanks to the process of smoking, is faintly reminiscent of bacon. In Japan, and in very good quality Asian markets, you can find the smoked and dried bonito or katsuoboshi sold in dark firm blocks.  And just as a Tuscan farmer might shave off a bit of prosciutto ham to flavor a dish, Japanese cooks shave the katsuoboshi to season broth and other dishes.  Kombu, the second ingredient in dashi, is a member of the kelp family and it is sold in long, brittle strips which can be subsequently rehydrated.  Both the kombu and bonito impart their distinct flavors to dashi and are essential in making a good miso soup.  You can find bonito flakes and dried kombu in any well-stocked health food store or Asian grocer.

In addition to a base of seaweed and bonito, our favorite version of miso soup includes other nutrient-dense additions: particularly fresh clams and wakame, another seaweed.  Clams, as is the case with all shellfish, are profoundly rich and concentrated sources of nutrients. Just a one-ounce portion of freshly cooked clams contains over 400% of the daily value for vitamin B12; moreover, clams are also a rich source of riboflavin, niacin, zinc, iron, phosphorus, potassium and selenium1.  Clams are, indeed, one of the most nutrient-dense foods widely available to us (read more in the nutrient showdown).  Wakame, a seaweed typically used to flavor and add interest to miso soup, is also rich in trace minerals and iodine.  Wakame is rich in a component called fucoxanthin.  Preliminary research into fucoxanthin, a carotenoid, suggests it could prove helpful in the fight against obesity2 and metabolic syndrome3 as it promotes the burning of fat cells stored in adipose tissue4.

These two deeply nutritive ingredients, clams and wakame, combine with a third important inclusion in this soup: miso itself.  Miso, a traditionally fermented soy product, provides that ever-pleasant and soothing umami flavor, but it’s greater benefit lies in its nutritive value.  I’m not one to promote the use of soy foods as beacons of health because, typically, they’re a result of over-processing which greatly diminishes their nutritive value while greatly increasing their antinutrients and problematic components; I do, however, make an exception for limited amounts of traditionally prepared soy foods like tempeh, natto and, of course, miso.  Miso is a good source of vitamin K2 typically found in grass-fed dairy products andnaturally fermented foods; vitamin K2, as opposed to K1 which is typically found in leafy greens, is concretely linked to reduction in the risk for cancer5.  Moreover, miso soup itself is linked to a reduction in the risk of breast cancer6.  Miso paste, traditionally prepared, can also be a good source of beneficial bacteria; however, to prevent killing the beneficial microorganisms in the miso paste, you must whisk the miso into the dashi after it has cooled a bit; doing so also improves the flavor of the soup.

miso soup with clams and scallions

Miso Soup with Clams is one of those special foods – simple and quiet and humble, but also elegant in its simplicity.
Prep Time20 mins
Total Time20 mins
Print