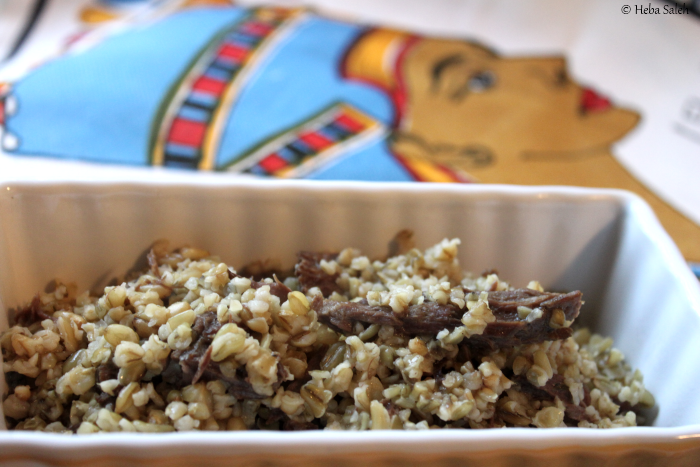 “Let’s get freekeh for when we have friends over in a few days!” I said to my husband in a voice much louder than I thought. Curious and amused gazes drifted towards us as we stood in the quiet health food store, and one by one they looked away in what I deciphered was embarrassment. “Freekeh – the ancient grain – is right over here” I said in the same voice, which sounded quite faint now, and no one was paying much attention anyway. You see, my husband and I are Egyptian-Americans, raised overseas – me in Bahrain, a little island in the Persian Gulf, and he in Egypt, until we were about twelve years old, when we moved to the United States. When I mentioned to him that we should get freekeh, I didn’t think about how it can be interpreted in English, until right after I said it. Story of my life.

Ever since getting married to Sherif in July 2009, I took up cooking. And by ‘took up cooking’, I mean I sometimes spend half my days doing it … taking pictures of my creations and blogging about it. I also really appreciate traditional recipes; the older, the better. I figure, if they’ve been around for so long, that must be for a good reason! That’s why I frequently like to call my grandparents, who live in Egypt, to get their take on how to cook everything traditionally from soups to veggies to desserts. I can never seem to remember what all the ingredient names are in Arabic, but I try to make do, and I usually take down some really awesome recipes in Notepad while chatting with them. Grape leaves stuffed with rice and ground beef, molokhia (a green broth-based soup), veal escalope panée, Egyptian preserved lemons, and spiced apple compote with cardamom and cloves are just a handful of gems I have collected from our lovely conversations. Besides preserving traditional recipes, I like two things about cooking – connecting with the food (sounds cheesy, but I’ve grown to appreciate high-quality — mostly local — ingredients more than anything), and connecting with those I love during mealtimes. Nothing satisfies me more than these two things. Oh, and my grandmother’s voice on the phone, congratulating me on a job well done — judging by my blog pictures. What a sweet feeling!

So, preparing for intimate dinner parties is something I anticipate with a mixture of excitement and dread. With two blogs under my name – one focused on healthy living, and another that I co-author with a friend on traditional Middle Eastern cuisine – many friends are under the (faulty) impression I’m some kind of food guru, and the pressure to make the best food they’ve ever tasted is an expectation I insist on placing upon myself, much to my husband’s discomfort. “Make anything simple; it’s the thought that counts,” he’d say, almost every time, with kindness in his voice. But … but … it has to be awesome! Traditional Middle Eastern fare that is new to my guests’ palates is something I always think about making, especially for non-Middle-Eastern friends. That’s why I decided on freekeh one time. It’s an ancient grain, sure, but no one in America really knows what to do with it! And in an effort to keep it fairly simple, I decided on pilaf. Pilaf is one of my favorite dishes to make, because it’s fairly difficult to mess up, very filling, warming in the wintertime, and actually pretty frugal too. It would be the perfect main dish … turned-side-dish if things didn’t go quite as I planned! I’d serve with a minty yogurt tzatziki with fresh pomegranate arils for extra tang. And toasted pine nuts atop the pilaf? Sure, why not? 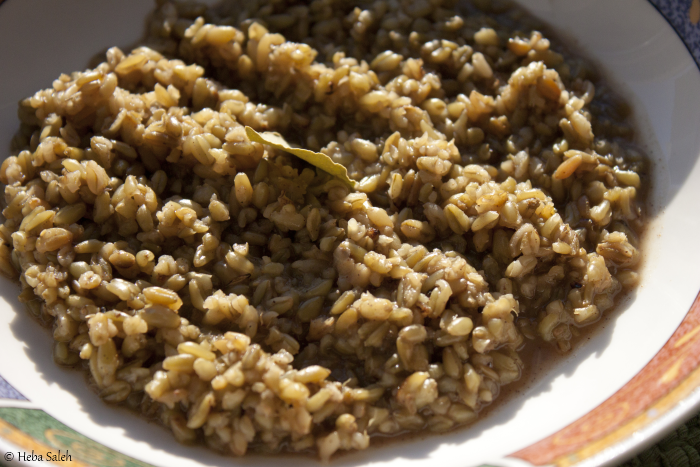 By the way, we just call it fireek (feh-REEK) in our Egyptian-dialect Arabic. This hulled grain is made from durum wheat when the seeds are still “milky”; the stalks are sun dried, then burned, giving the seeds a smoky aroma.  Clifford A Wright explains the process better than I can:

The moment the leaves start to turn yellow and the seeds are still soft and creamy is the ideal moment. The wheat is harvested and arranged in small piles and left to dry in the sun for a day. The piles are set on fire and the blaze carefully controlled so only the straw and chaff burn and not the seeds. It is the high moisture content of the seeds–unique to hard wheat–which prevents them from catching fire. The supervisor of the burn must pay close attention to the location of the fire, the wind, and the progress of the burn to assure a perfect final product. The roasted wheat then undergoes further thrashing and sun-drying to make the flavor, texture, and color uniform. It is this thrashing or rubbing process of the grains that gives this food its name, farīk, or “rubbed.” The seeds are now cracked into smaller pieces so they look like a green bulgur. The resulting food is earthy, smoky, and has a distinct flavor. It is popular in Syria, Palestine, and Jordan and one finds famous freekeh dishes in Turkey, Egypt, Tunisia, and Algeria. Freekeh has a higher nutritive value than rice, especially in protein, vitamins, and minerals. 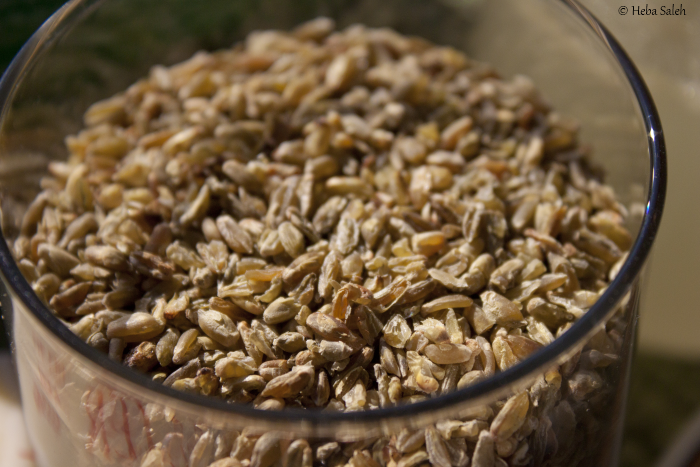 Cool, huh? How ancient is freekeh, you ask? Well, Egyptians have been claiming that the ancient Pharaohs were the masterminds behind this preparation of the wheat, but of course we have no proof that this is the case. According to legend, freekeh actually originated as far back as 2300 BC, when a bunch of hoodlums attacked a Syrian village and set it on fire before escaping. (Hoodlums aren’t just modern gangsters, you know!) Anyway, allegedly, the village’s inhabitants rushed to salvage their crop, and tried to rub away the burnt chaff. They were pleasantly surprised to find that the kernels hadn’t burned because of their high moisture content; in fact, the fire had given them a greenish color and a smoky, nutty flavor. “Good deal – let’s burn the rest of our crop for this same effect,” they thought. That last bit was my own, but they must have really liked the practice, because it’s still a traditional preparation method for green wheat in many parts of the Middle East and North Africa including Egypt, where I’m from. There’s also a brief reference to burning chaff off the wheat in the New Testament.

A word about freekeh’s benefits and uses

Finally, before delving into the recipe, I wanted to share a bit about what I learned regarding freekeh’s nutritional benefits, as well as what else you can use it in … besides a savory pilaf! It has a relatively low-glycemic index compared to most grains, some interesting prebiotic properties, and is higher in protein, calcium and potassium as compared to brown rice (Freekehlicious).

Oh, how shall I describe it? Freekeh is moist yet chewy with an unmistakably smoky background flavor. It can be stuffed in roasted poultry (my grandma stuffs Egyptian squab with freekeh, and it’s divine), paired with roast vegetables, as a grain in salads, as a side dish – all savory meals. I have yet to try a sweet take on freekeh, but I’d be curious to see how its smokiness works out with sweet notes; could be interesting in a porridge-type-of-thing. I’m not prone to buy into hype, but if it that kind of thing gets you excited, freekeh has been touted as a “superfood” by British celebrity chef Jamie Oliver, and has started receiving some attention in health food blogger circles as “the new quinoa”. I prefer to learn from the ancients … 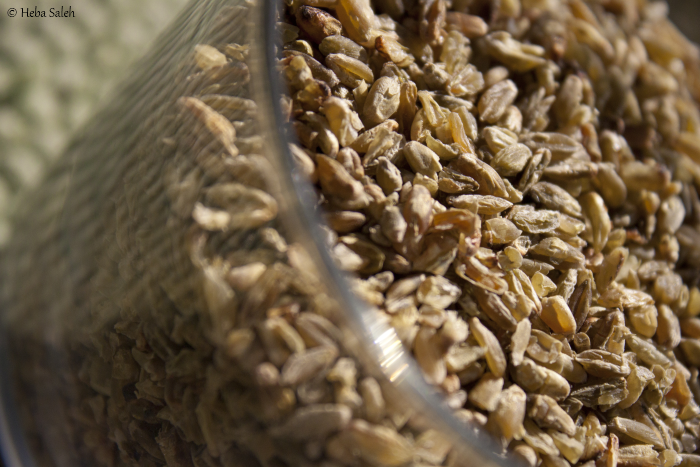 You can find freekeh at most Middle Eastern grocery stores and health food stores. I have yet to find a good online source. Wherever you get it, make sure to check for little stones that may get into the stalks while chaffing. Rinse well, put in a metal container, cover with water and rub between your hands. Any impurities will float to the top, any little stones will sink to the bottom and you’ll hear them scratching the surface. Pick out the stones, and repeat the process a couple of times until the freekeh is free and clear. Now comes the soaking time. Nourished Kitchen readers must be familiar with this process – simply add to a glass container, fill with filtered water, add in a tablespoon of apple cider vinegar or lemon juice, and leave overnight on the counter.

In this recipe, I used tender grass-fed lamb stew meat, braised in grass-fed ghee, and slow-cooked in its own juices for a few hours. I’ve also made this with beef, and it was great. Either type of meat works well; just make sure it’s grass-fed and grass-finished if possible. The freekeh is then added in, with beef broth or chicken broth in a proportion of 1:2, brought to a boil, and stewed with spices until the liquid is absorbed into the freekeh and it has cooked. Topped with toasted pine nuts and a served next to a minted-yogurt dip with some tart-sweet pomegranate arils, this pilaf really was a hit every time I’ve made it either for dinner guests or my family. I urge you to try freekeh – you’ll love this Egyptian recipe! 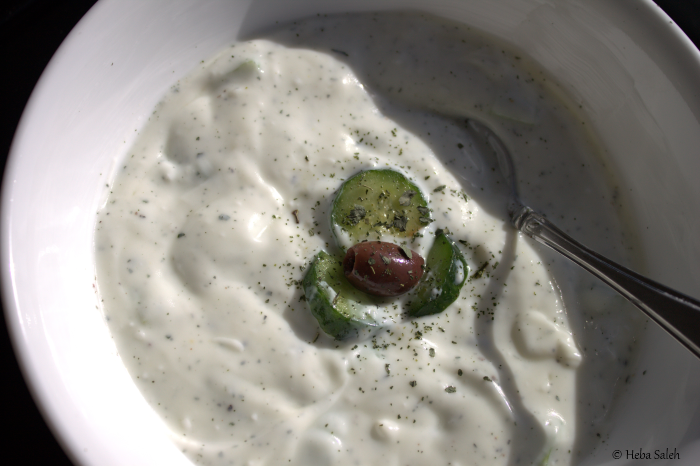 (1) Rinse and soak freekeh: Using my grandma’s method described in this post, clean the freekeh of any impurities or small stones. Soak overnight in filtered water with a tablespoon of unpasteurized apple cider vinegar or fresh lemon juice.

(2) Braise and stew meat: In a deep enameled cast iron pot or stainless steel pot, add 2 tablespoons of grass-fed ghee, and saute cubed lamb meat until lightly browned on all sides. Turn heat to low, and stew meat for 2-3 hours until it has released its juices and has become well done. Break it apart into smaller pieces.

(3) Add freekeh: Rinse freekeh from soaking water, and add to pot with stewed meat. Add 4 cups of homemade broth, a few cardamom seeds, a few bayleaves, allspice, unrefined salt, and freshly ground black pepper and bring to a boil. Lower heat, cover, and leave to stew for 45 minutes or so, until the freekeh isn’t crunchy and has absorbed most of the liquid, but hasn’t yet lost its bite. Mix well.

(4) Toast pine nuts: If you wish to add a bit of crunch to the dish, dry toast some (previously soaked) pine nuts on the stovetop, stirring often, and add on top.

Heba had been blogging about healthy living for a while on her own blog, My Life in a Pyramid, until she ran into another Egyptian blogger, Brenda, who was also sharing traditional Arabic recipes. They were incredibly excited to share with the world their love of these Middle Eastern specialties that they’ve been enjoying since childhood, and so they decided to put their heads together and start a site dedicated to preserving traditional Middle Eastern recipes.