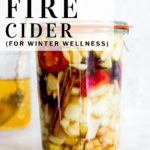 Rich with garlic and onion with a punch of chilis, Fire Cider is a traditional herbal remedy used to warm up the body during the cold months and support immunity during cold and flu season. Its striking blend of ginger, garlic, onion, horseradish, chilis, and other herbs gives it a potent warming quality, while apple cider vinegar and honey give it a pleasant sweet-sour flavor.

Jump to Recipe | What is it? |Herbs | Benefits | Dosing | Variations

What is fire cider?

Fire Cider is an herbal remedy developed by renowned herbalist Rosemary Gladstar in the late 1970s. People take it in winter months to support the immune system at the onset of a cold, to soothe the sniffles, and as a warming tonic.

Made with common ingredients that you can find at just about any grocery store, fire cider is both easy to make and affordable. Further, due to its reliance on highly accessible ingredients like ginger, onion, garlic, and vinegar, fire cider is one of the easiest herbal remedies you can make.

Where did it start?

Strictly speaking, fire cider is an oxymel - or an herbal remedy that includes both vinegar and honey. Oxymels have been used for thousands of years, and they originate in ancient Persia and Greece.

Herbal vinegars and oxymels have been popular for years among herbalists, including herbal combinations that include onion, garlic, and hot peppers like cayenne. In the late 1970s, Rosemary Gladstar developed this particular remedy and named it Fire Cider (1). Her original recipe includes equal parts horseradish, ginger, onion, and garlic with a small amount of dried cayenne pepper.

Since that time, Fire Cider's popularity as a folk remedy skyrocketed. And now the once-obscure remedy cherished by herbalists has found mainstream popularity. Accordingly, you'll find many variations of Gladstar's original recipe.

Fire Cider depends upon five dominant herbs including ginger, onion, garlic, horseradish and hot chilis like cayenne. In addition, many home herbalists add turmeric which is strongly anti-inflammatory, rosemary which has anti-microbial properties and is a restorative tonic, or cinnamon for its warmth. I also include star anise which has a sweet, soothing quality.

What is fire cider used for?

Like Four Thieves Vinegar, fire cider is used by herbalists to support the immune system. And many people take it to reinvigorate and restore their bodies with warming herbs. It's also an excellent general warming tonic during the cold months of winter or as a general wellness tonic. However, most people use fire cider to support immunity during cold and flu season, at the onset of sniffles, or to ward off a cold.

How much should you take?

Most people take one or two tablespoons of fire cider at a time, often diluted in water or tea. Many herbalists recommend taking a shot every 3 to 4 hours if you feel a cold coming on.

However, more than a remedy, fire cider is also an excellent food - a delicious, spicy sweet-tart tonic that you can use in place of other vinegars in vinaigrettes and other culinary preparations. Accordingly, it's a great way to consistently consume medicinal herbs regularly.

How to Make Fire Cider

With its garlicky heat and vibrant flavor, fire cider is a traditional tonic that promises to boost the immune system and support your health through the winter months. And it's super simple to make, all you need is a handful of ingredients, apple cider vinegar and honey.
Prep Time5 mins
Maceration30 d
Total Time30 d 5 mins
Print Save RecipeSaved! Click to Remove Ads

Make it Your Own

It's fairly easy to make fire cider with ingredients you can find at just about any grocery store, but there's countless variations as herbalists and home cooks transform the tonic and make it their own.

Many versions include medicinal or culinary herbs you might find available locally, while others include rarer herbs that you might find at your local herb shop or order online through Mountain Rose Herbs.

Turmeric is a potent anti-inflammatory herb related to ginger, and it works synergistically with black pepper. You can order it online here.

Cayenne powder is traditionally used in fire cider, and you can order it here.

Citrus fruit like lemon can make a great addition, too. You can chop the whole fruit, or just use the peel.

Thyme is both a culinary and medicinal herb, and traditionally treasured as healing herb. It's also an expectorant and often included in herbal cough remedies. You can use either fresh or dried thyme.

Echinacea supports the immune system and the body's innate healing capacity, and you can add it to your fire cider, too. Wild echinacea is an at-risk plant, so order organic, cultivated echinacea from a reputable source.

Try these herbal recipes next ...