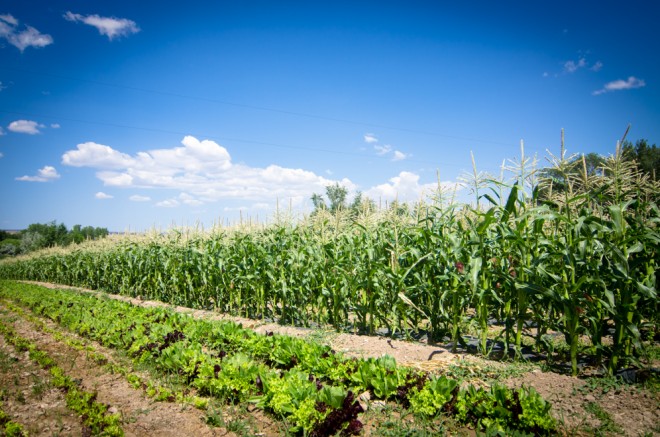 As part of our work in farmers markets and sustainable food, my husband and I visit our regional farms regularly, and what strikes me more than anything else is not the heritage breeds of cattle who follow their rancher to new pastures with the devoted eagerness of a duckling following its mother.   It’s not the huge blooming flowers, or the grass-fed Jersey cows lining up to be milked.  It’s not the decades-old orchards blossoming in spring with frothy white flowers or hanging heavy with fruit come late summer.

What strikes me most is the fragility with which these ranchers and farmers work with great purpose in the face of regulations and governmental policies that favor industrial agriculture.  Steadfastly they work, eschewing massive industrial production – in favor of the old ways that nourish the soil, the community and my family.

It is this very adherence to the old ways and to the farm-to-consumer relationship that is currently under threat.  And while we can wistfully continue to celebrate small farms, sustainable agriculture and the concept of real food, celebration is simply not enough.  These farms need real advocates.  Advocates who can fight for them publicly in the face of growing pressure.

For this reason, I support the Farm-to-consumer Legal Defense Fund – a nonprofit 501(c)4 organization devoted to protecting the rights of our nation’s small farms, artisan food producers and consumers.

Your right as a consumer (and those of your farmer) are under threat.

The FDA has gone on record stating that you do not have the right to consume or feed your children any particular food, and that you do not have a general right to bodily and physical health.  Further, small farms across the country face the serious threat of being raided, their products seized, their family life disrupted and their livelihood taken away coupled with insurmountable legal expenses.

While the primary target of government health officials seems to be those who sell raw milk either on the farm or through herd-share agreements, farmers undertaking farm-to-table dinners are harassed, state health departments have even considered criminal prosecution of consumers, and have seized thousands of dollars in food in similar raids on private buying clubs around the country.

In the wake of massive food recalls on industrially produced beef, turkey, eggs and other foods, our state and federal governments choose to ignore the true threat to public health represented by mass-produced and mass-distributed food while, instead, focusing their attention on shutting down small farms selling raw milk, and artisanal cheese – seizing their products even when no case of illness is present.

While large agricultural giants who rely on mass-production of foods in feedlots and through other industrial means may sicken hundreds of people each year and recall millions of pounds of turkey and other foods, the threat they create to public health is ignored while government agencies instead choose to focus their energies on shutting down small farmers – the very people who don’t have the means to defend themselves.

The cost of legal expenses is insurmountable.

The small family farms that find themselves raided, their product seized and their ability to do business effectively quashed do not employ the string of attorneys that large agricultural businesses have access to.  They’re simple, small farms – like the ones I visit each season and the ones you support when you shop at your local farmers market.   Further, raids can shake the very core of these families – some of whom have struggled to keep small children calm while armed officers go through their foods, their personal belongings and their computers.

The cost of hiring attorneys in the wake of a raid or product seizure and the years it can take in court is often insurmountable, and like any small business or family just struggling to make it, they haven’t the financial resources to hire expert attorneys or to seek out advocates that can help them.

I chose to stop complaining and start acting.

Each year seems to bring another story of another small farm raided, while the recalls of industrial agriculture grow and grow.  The injustice is staggering.

More importantly, why are small farms with so few defenses so consistently targeted?

Instead of complaining, instead of sighing in exasperation, I chose to act.  Not only do I spread the word about these cases, but also I choose to support the Farm-to-consumer Legal Defense Fund with my financial donation.

While I may celebrate the beauty of small farms and shop farm-direct through CSAs and farmers markets, I know that it is my commitment to supporting advocacy for these small farms that really counts.

How to Support the Farm-to-Consumer Legal Defense Fund

If you similarly find yourself outraged by the growing attack on small farms, if you feel frustrated by the injustice behind raids on small farms while industrial agricultural giants can sicken the population with impunity, and if you’re wondering what you can do, I strongly urge you to become a member of the Farm-to-consumer Legal Defense Fund

This not-for-profit organization fights for the rights of small farms, and protects your access to the foods of your choice as a consumer.

Please Donate to the Fund by August 31st.

While you’re donation to the Farm-to-consumer Legal Defense Fund is always welcome, right now the Fund is undertaking its annual FUNdraiser in Virginia, where I’ve volunteered my time to sit on a panel discussion focused on community activism.  Even if you can’t attend the weekend, please give what you can to support this organization’s continued efforts to protect small farms and consumer rights.